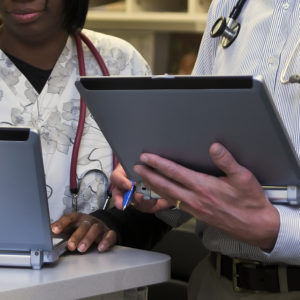 A Quiet Revolution in Health Care in a Digital Era

The Left seeks nationalization and centralization — a single-payer system where a wise federal government funds and allocates care. The Affordable Care Act (ACA) approximates this ideal by subsidizing and enlarging the pre-existing menagerie of public, private, individual and group plans. The Right’s hope is federalism and privatization — shifting power from Washington to states and private entities. Each vision has dozens of variations.

Before the ACA, America had a certain number of doctors, nurses, hospital beds, laboratories and machines. Providers had recipes for combining these resources into care and prioritizing who gets it. Resources were heavily used. Recipes changed slowly. The ACA promised millions of people greater access to care, but did relatively little to change resources or recipes. It mostly created winners and losers in terms of cost, care and health. If the ACA gave you an extra hour of physician time, someone else likely lost an hour. If you paid less, someone else paid more. The same would be true of the Left’s nationalization and centralization or the Right’s federalism and privatization.

Each scheme boils down to: “We have a magic knife. Use it to divvy up a pie, and you’ll get more slices, bigger slices, tastier slices, and cheaper slices.”

Insurance matters, but it’s no magic knife. In fairness, no one imagines bliss coming solely from shifting care and costs from patient to patient. Each looks also to less waste, fraud and abuse and to more technological innovation.

Waste-cutting has limits. A common guesstimate is that 30 percent of health spending is waste, but I’d guess that’s an overestimate. Much waste is apparent only in hindsight, and “buy more winning lottery tickets and fewer losing ones” is a futile strategy. No reform will stop all foreseeable waste.

Suppose 30 percent of health care spending is waste, half is foreseeable, and half of that is preventable. Then the best reforms would cut costs by only 7.5 percent. Spending would drop only to 2015 levels — not exactly “the good old days.” Once you achieve this 7.5 percent reduction, the waste-fraud-abuse strategy has maxed out as a cost-cutting tool. Plus, nothing in this cost-cutting effort improves the care we receive.

While these efforts are commendable, they’re geared toward high-cost, large-institution advances, not the disruptive innovation that made information technology vastly more powerful and massively cheaper inside one generation. In IT, planet-changing innovations came from small start-ups; most vanished and a few, like Google, grew large.

The IT comparison isn’t arbitrary. In this century, much of what keeps us healthy will spring from the digital realm: Big Data, wearable telemetry, artificial intelligence, 3D printing, nanotechnology, telemedicine. The cost and speed of DNA sequencing are progressing more rapidly than IT’s Moore’s Law. Much medical diagnosis and decision-making will soon be better managed by machines than by physicians, leaving doctors free to focus on endeavors where human judgment is indispensable.

This world already exists, barely perceived by the political community — or the medical community. The key to nurturing it is to remove the obstacles that lie in its path.