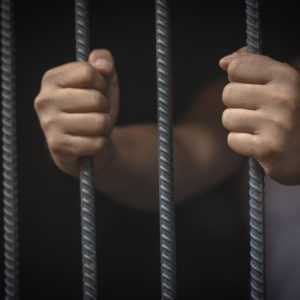 More than 300 workers in the small, rural community of Winton, N.C. lost their jobs when a government contract was allowed to expire on March 31.

If the contract had been with a defense contractor or an afterschool program, there would likely have been more public outcry. But few politicians or activists are speaking out over the loss of these union jobs. Those people worked at a private prison.

Rivers Correctional Facility in Winton — a town of just over 800 people near the Virginia state line —  was one of the dozen prisons operated by private contractors in the U.S., housing about 10 percent of the Federal Bureau of Prisons’ incarcerated population.

The issue of contractor-operated prisons has become a political hot button, with nearly all of last year’s Democratic presidential candidates saying they should be shut down. And so when President Joe Biden issued an executive order in January directing the Department of Justice to end private federal prison contracts, it came as no surprise.

In the case of Rivers, the decision not to renew its contract had been made before the election. But the impacts are being felt today.

“Everybody should care about working-class people,” says Roosevelt Littlejohn of the National Federation of Federal Employees (NFFE). It’s the oldest union in America, representing more than 100,000 government workers across the United States. “These employees have families to feed, children to put through school, and we have a lot of single parents there, single women with kids, that don’t know what they’re going to do next.”

According to The Progressive Pulse, a blog from NC Policy Watch, 336 jobs were lost when the Rivers contract was allowed to expire. Kristen Fajardo, president of the local lodge CE-4 of the National Federal of Federal Employees, wonders why more elected representatives aren’t speaking out.

“We can’t believe our U.S. Representative G.K. Butterfield has more urgent duties than protecting our families and the hundreds of other families hurt by this shutdown,” Fajardo said in a statement. “We, his constituents, urgently need his support.”

Butterfield’s office did not respond to requests for comment from InsideSources.

Progressive groups like the ACLU praise the Biden approach, despite its impact on the industry’s workers. “President Biden made bold commitments on the campaign trail to cut mass incarceration and reverse the legacy of decades of racist and damaging policies,” David Fathi, director of the ACLU’s National Prison Project, said in January. He went on to call Biden’s executive order “an important first step,” but added the president “has an obligation to do more, especially given his history and promises.”

And what about Winton? The Geo Group, the private contractor that operates Rivers, has already said it hopes to market Rivers to other federal agencies. And the NFFE sent Biden a letter asking him to allow the U.S. Marshals Service to use the Rivers for its work.

Meanwhile, the issue of Biden’s executive order looms over this rural, southern town.

Littlejohn, a former prison guard, already has one idea.