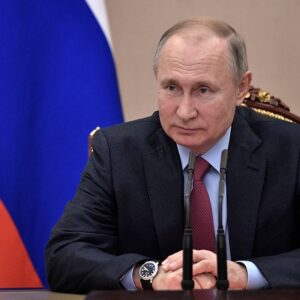 A U.S. Military Contractor is Ignoring Sanctions Against Russian and Funneling Money to Putin

At the start of 2022, it often seemed as if nothing could bring the world together. But Russia has now managed to change that. The country’s brutal attack on Ukraine is condemned across the board. It is uniting people, left and right, and across national borders.

That unity is good. The time for talk is long past and effective action is necessary. “Meaningful dialogue, as we strived for before, is not an option for Russia, which is so blatantly violating international law, which is using military force against an independent, sovereign nation as Ukraine, and which is responsible for atrocities, for the suffering we see taking place in Ukraine every day,” NATO Secretary-General Jens Stoltenberg told reporters.

The action so far has been in sanctions imposed by countries across Europe and across the Atlantic. Russian oil and gas are now off-limits, as is most trade.

There are more steps ahead. “At NATO and the European Union, and at the State Department, the Pentagon, and allied ministries, blueprints are being drawn up to enshrine new policies across virtually every aspect of the West’s posture toward Moscow, from defense and finance to trade and international diplomacy,” The Washington Post writes.

But while the sanctions are starting to bring down the Russian economy, and hopefully grinding its war machine to a halt, one European company disagrees with the policy.

“We don’t think sanctions on imports will be appropriate,” Guillaume Faury, Chief Executive Officer of Airbus, told reporters. “This will be a small impact on Russia and would have large consequences on the rest of the countries and the industry. So we think the no-sanction policy actually is the most meaningful one.”

Airbus, a major weapons producer, has an agenda here. It imports about half of the titanium it uses from Russia. It needs titanium to build its planes (titanium pairs well with modern carbon frames) and wants to secure its Russian supply.

In other words, Airbus is focused on kissing up to Russia and staying on Putin’s good side in order to maintain its access to Russian titanium, even though that means turning a blind eye toward the deaths of thousands of innocent Ukrainians.

Bloomberg notes the policy is working to date. “Airbus, a major customer of Russia’s VSMPO-AVISMA Corp., has so far been able to keep importing [titanium], which hasn’t been directly targeted by a growing list of European Union sanctions aimed at punishing President Putin.”

That is a major mistake.

Weapons manufacturers should follow national policy, not make it for the governments they work for. By weakening sanctions, Airbus endangers the entire sanction regime while at the same time trying to grow business with the Pentagon by proposing to sell tanker refueling jets to the Air Force.

Airbus is not the only European company flouting sanctions. The Christian Science Monitor reported on May 2, “The giant French-owned Auchan hypermarket [in Moscow] has bursting shelves and full stocks of almost everything from toilet paper to fresh meats and vegetables, citrus fruits and bananas, to a wide range of domestic cheeses and dairy products.” Several American fast-food chains, such as Burger King and Subway, are still operating in some locations in Russia. While the heads of those companies wisely closed up shop in Russia, some franchise owners have kept individual restaurants open.

Internationally, the sanctions on are working. “Russia’s annual inflation rate is almost double what the United States is encountering,” economics columnist Sebastian Mallaby wrote in The Washington Post. “In battle, you take casualties to inflict larger casualties on the other guy. Economic warfare is no different.” He is calling for more and deeper sanctions, even as some companies want them removed.

These companies are on the wrong side of history. American policymakers should be taking steps to limit their use of its products and should, instead, focus on winning the sanctions battle against Russia.