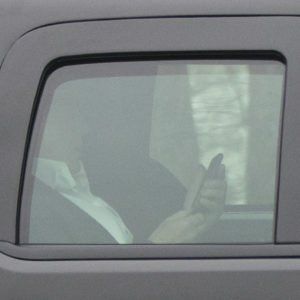 President Donald Trump, is seen from the window of his presidential vehicle as it leaves the Trump National Golf Club in Potomac Falls, Va., Sunday, March 26, 2017. (AP Photo/Manuel Balce Ceneta)
[IS] Opinions

A Window Into the Mind

However, as in the case of President Trump when he uses a sequence of forceful over-the-top words — such as fantastic, amazing, wonderful and sensational — it usually means deception, trying too hard to sell. It consequentially opens a window into his mind of intent.

Little children wonder if their mothers have eyes in the back of their heads. They come in with chocolate all over their face and wonder how she knows they were in the cookie jar. As a young teenager, I had a friend when he lied had a modified Pinocchio effect, the end of his nose became flushed. Those are the easy ways of recognizing deception.

Jon Van of the Chicago Tribune said the thing that separates human beings from other animals is not the ability to reason or use tools, but telling lies and the human capacity for self-deception. It is socially adaptive for humans; where they may be able to deceive even themselves, it’s almost a necessity.

Aside from the use of a polygraph or truth serum, a subject’s body language, facial expressions and spoken words are an effective manner of revealing deception. I often turn off the TV’s sound, to concentrate on facial expressions. Knowing what to look for can be a dead giveaway, but it takes a lot of experience to identify the telltale signs. A much easier way is to listen to unscripted words.

Evaluating deception depends upon clues; stacking multiple clues together builds a picture. This concept applies to crooks; advertisers; friends and politicians alike. Their words strip them of their invisibility. Obviously, education, speech defects and accents must be considered. It’s therefore important to establish a baseline, what is normal?

The words used and their integration is a good indicator of deception, since you’re listening to a window into their mind. Psychologically, people mean exactly what they say, they can’t help it. Spur of the moment tweets can also open the window. However, do not interpret what a person means.

For the O.J. Simpson suicide letter, the media reported, “First everyone understand, I had nothing to do with Nicole’s murder.” The words “I had” were not in the letter, just interpreted by the media, because they believed this is what Simpson meant; however, it changed the meaning. Without those words, Simpson is taking himself out of his denial. He wanted to tell us he had nothing to do with Nicole’s murder but he could not bring himself to say that.

Todd Rogers, a behavioral psychologist at Harvard’s Kennedy School of Government, considered the effect of dodging the question. He found when someone answers a question with a completely unrelated answer or not at all, it was a form of deception. Going further, Lindsay Woolman, a health care writer, showed that a story change at different times is a strong sign of deception. The same applies when a person contradicts themselves or uses statements that don’t make sense.

The use of verbs and their tense tells their own story, “I was sitting in my car when a man opened my door, pointed a gun at me and tells me to get out.” The description starts using past-tense language, then switches to present tense with the word “tells.” This indicates the story is not being drawn from memory. The use of deflection words such as “later on” or “afterward” indicate information has been withheld.

Presentation is another clue, including changes in voice pitch. A higher than normal voice (as vocal cords tighten) or talking speed (slower, giving the speaker more time to think of an answer.) There are, of course, other telltale signs. The more someone talks, the more likely they are prone to make mistakes if they are trying to deceive.

Often clues are more than just a single word. A complete thought that is known to be false clouds everything previously heard. A statement can be made, which is perfectly true, but is nonetheless made to deceive by language, such as, “Did you know Bob Jones matriculated in college.”