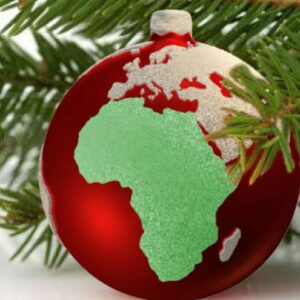 A Young Man’s Christmas in Africa

Every year, I write about Christmas. But none of my Christmas columns has given readers more pleasure than this one.

You will find them in any outlandish place: the misfits. They are the people Arthur Miller wrote a wonderful short story about in 1957, which was made into a less wonderful 1961 movie starring Marilyn Monroe.

The trouble with the movie was that Marilyn didn’t belong in it. The original story was simply about a group of men who didn’t make it in society and lived on life’s perimeter. They were classic misfits: men who had too many wives, too many bad love affairs, or too many drinks; or disgraced themselves variously in their professions or families, and sometimes their countries.

You will find the misfits in faraway places, like Nome, Alaska or Key West, Florida. And you will find them scattered in the Australian outback or hanging on in some corner of Africa.

That gets me to my tale.

My misfits were in a corner of Africa in 1957, in Ndola, which proudly called itself the commercial capital of Northern Rhodesia (now Zambia).

Ndola wasn’t a garden spot: No one picked up the atlas and said, “I want to settle in Ndola.”

In fact, Zambia wasn’t one of the parts of Africa that Europeans selected for settlement, like Southern Rhodesia (now Zimbabwe) or Kenya. People went to Zambia to mine the copper, to farm, or to trade — most people, that is. The misfits just gravitated there, much as I did, looking for a congenial place to hang out.

And what a bunch of misfits we were!

There was Percy Powys, the scion of a good family in Wales. His misfortunes, he said, began when he took a Piccadilly whore home for dinner. His parents decided he needed to make a new life in Africa; they shipped him off to Johannesburg.

Three wives, several executive jobs, and oceans of gin later, Percy was working in construction. A tough, weathered man of uncertain age, he always reminded me of Richard Henry Dana Jr.’s  description of one of the captains in “Two Years Before the Mast”: a man “made of steel and whalebone.”

Most misfits don’t have wives or girlfriends. The company of women is disturbing to them — a reminder of what they don’t have or what they had had too much of.

In this sense, Geordie (which is a regional nickname for a person who comes from Northeast England) was different. He had a wife, although nobody saw much of her.

Geordie sometimes worked on the railways. He had been a commando, a London bus driver, and a lot of other things. He had a seventh-grade education and the distinction of being the only one of the misfits who was blacklisted by the police in every bar in Ndola.

Geordie was a rough man with elegant taste: He loved Scotch, Italian opera, and chess — and he could combine all three. He would play a Verdi opera on his phonograph, play chess with me, and all the while consume prodigious quantities of tea laced with Scotch. The more he drank, the more he turned up the volume on his phonograph. Then he would grab me by the shoulders and shake me, yelling, “Do you believe that a human being could compose something so beautiful?”

Sometimes, at the latter part of the tea party, Geordie would become so consumed with his need to communicate the beauty of Verdi that he would go out into the street, grab an unsuspecting passerby’s wrist in a hammerlock, and drag the poor devil inside to listen to opera. It didn’t seem to be an effective way of spreading a love of opera, and often resulted in unpleasantness with the police.

Geordie was a serious misfit and one of the greatest men I have ever met.

There were others, like Peter Robertse, an Afrikaner who spoke with an Oxford accent and had been a Spitfire pilot in The Battle of Britain. His country had expectations for him in the diplomatic corps. But after Peter removed his pants at a diplomatic reception in Rome, he started down the long road to Ndola, where he worked intermittently in construction. At night, when he had drunk too much gin, he would relive The Battle of Britain and would rage on until he passed out.

Then there was my friend George Parkes, whom this tale is really about. He was an Armenian, who was built like a steel spring, and had a tremendous joie de vivre — a joy which had gotten him through one marriage and innumerable jobs in many countries.

At 35-years-old, George was full of schemes that didn’t quite come off. One of his schemes was to import dried fish from Lake Tanganyika and transport it to Ndola, where he would become a dried-fish millionaire. Another was to buy diamonds in the Congo and to transport them to Johannesburg, where they could be sold — all to be done without alerting the governments of the countries that lay in between.

I think it was just the romance of smuggling that appealed to George. At the time I knew him, he was selling cars.

As for me, I had set out to make my fortune in journalism. Unaccountably, I found myself laying drains in Ndola.

One day, George came to me in a state of high excitement. He told me that he had sold a car, and we had to celebrate with his commission.

But we wouldn’t celebrate in the raunchy dives of Ndola. We would drive to the next town, Kitwe, where we had heard tell there was a great French restaurant. And we would put on suits, abandoning the ubiquitous khaki which was our uniform.

What is more, George had a girl for the occasion: a beautiful English rose named Jean. She had followed a man from London to Africa only to find out that he had a wife. So, Jean was a sort of honorary misfit — and the only woman admitted to the company.

We bathed, we shaved, we took suits out of our closets that we hadn’t seen in a year. In a state of almost unbearable joy, we drove to Kitwe in a borrowed car.

All the way, George kept saying, “My father always said that Christmas is when you have five pounds in your pocket.” We had 15 pounds and it was Christmas, indeed.

We were much taken with the restaurant. We ate splendidly and drank French wines. We felt invincible, as one does on festive occasions.

And we were much taken with the idea of declaring Christmas whenever we wanted to. We tried to sing a carol, but we weren’t very successful. So, we took a different tack: I recited verses from “The Rubaiyat of Omar Khayyam.”

As our halcyon time wound down, a stranger stopped at our table and said, “I’ve never seen three people enjoying themselves so much. I’ve paid your bill. I had some luck myself today.” With that, he departed.

It was Christmas in spades. It was also July.