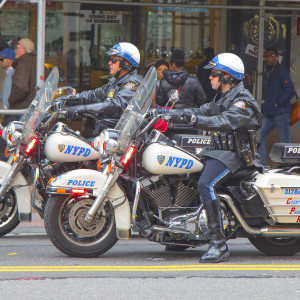 The bill proposes rules to be adopted by state legislatures, local governments and police departments, addressing complex policy questions such as when cameras should be activated and how video footage ought to be processed under various circumstances. These recommendations arrive as part of a burgeoning national conversation on body cameras for law enforcement officers, spurred by several high-profile deaths of black men at the hands of police.

“Policymakers nationwide have been asking for a plug-and-play model policy that shows them how to best balance the promotion of police accountability with the protection of privacy,” Chad Marlow, an ACLU lawyer focused on privacy and technology, said in a statement. “This is precisely what the ACLU is offering them today.”

According to the civil liberties group, cameras should be activated whenever an officer responds to a call for service or “at the initiation of any other law enforcement or investigative encounter between a law enforcement officer and a member of the public.” An exception to this rule would be a situation where an active camera threatens an officer’s life or safety.

In addition, the ACLU would require officers to inform the subjects of their recordings when they are being videotaped and, under several circumstances, allow these subjects to request that the camera be deactivated. Examples of these instances include when an officer enters a private residence without a warrant, interacts with an apparent crime victim or encounters someone seeking to report criminal activity anonymously.

The ACLU also wants to ban the use of cameras on elementary and secondary school grounds, except when officers are responding to “an imminent threat to life or health.”

With regard to handling footage once it’s taken, the civil liberties group would have police agencies do away with most video automatically after six months.

“The idea with body camera footage is that 99.9 percent of it is going to be absolutely useless,” Marlow told InsideSources Wednesday. “It’s very important that those videos remain private and get deleted in short order.”

However, when footage captures the use of force, a felony, events leading up to an arrest for a felony, or an encounter that caused a civilian complaint, the ACLU believes it should be kept on hand for three years. The organization thinks these same factors should determine whether videos are available for public release.

Sen. Tim Scott, R-S.C. said policing should remain a local concern, but the federal government has a role to play “to make technologies available to local departments looking for ways to keep both their officers and the public they serve safer.”

Marlow expects model legislation to help lawmakers advance their body camera discussions, both on Capitol Hill and in the states.

“Frankly, it gives them something a little bit more tangible to talk about and debate,” he said.