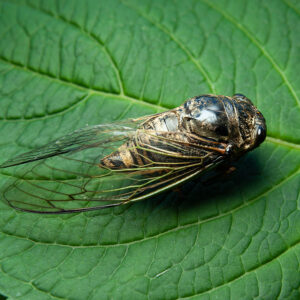 Adam Smith Versus Bamboo and Cicadas

I set out to write an essay on spontaneous order—billions of living beings acting in concert without central direction. My idea was to explore the sharp dissimilarity between spontaneous order among animals and among humans. I thought to call it “Cicadas and Adam Smith,” only to discover that, in 1977, the late evolutionary biologist Stephen Jay Gould wrote an essay—grievously wrongheaded, in my view—titled “Of Bamboos, Cicadas, and the Economy of Adam Smith.”

The literal truth of that statement has hovered under the sun around our Virginia home for weeks. My wife and I have box seats to an opera of Brood X (Brood 10) cicadas. The choreography is miraculous. After 17 years of sucking tree roots, billions of nymphs emerged when the soil temperature reached precisely 64 degrees. Males rattled nonstop throughout daylight hours to attract females. Then, countless hummingbird-looking females flitted about our trees, laying eggs. The din is calming now as an entire generation dies, one-by-one. Soon, hatchlings will drop from the branches and burrow underground. The opera’s curtain will soon descend, with no performance scheduled until 2038.

An engaging writer, Gould sometimes combined the erudite with the erroneous. His attempt to parallelize the life cycles of bamboo and cicadas with the economy described by Adam Smith is such a case. Ironically, Gould briefly alights on and then flies away from exactly why spontaneous order among humans has little in common with that of the natural world.

Gould hypothesized why certain bamboo species flower only once every 120 years and why periodical cicadas’ life cycles extend across prime numbers of years. (There are 17-year and 13-year species.) They likely do so to assure that no predatory species can develop a lasting taste for them. Gould’s insights into these phenomena are worth reading.

But the spontaneous order of cicadas and bamboo arises from decentralized actions of mindless automatons. Gould says, “Darwinian theory advocates no higher principle beyond individuals pursuing their own self-interest.” That adequately describes Darwinian theory and likely presents an accurate description of bamboo and cicadas.

But Gould greatly misunderstands economics when he writes, “The problem is similar to that faced by Adam Smith when he advocated an unbridled policy of laissez-faire as the surest path to a harmonious economy.” Citing Smith’s famous “invisible hand” from “The Wealth of Nations,” Gould summons forth the frequent caricature that Smith’s individuals “follow no path beyond the pursuit of their best interests.” In 2019, in Edinburgh, I found that sentiment scrawled on a sign at Smith’s gravesite—likely painted by some bampot who had feasted on the same intellectual tree roots as Gould.

Smith was a philosopher with a profound interest in human morality. His other magnum opus, “The Theory of Moral Sentiments,” begins with the declaration, “How selfish soever man may be supposed, there are evidently some principles in his nature, which interest him in the fortunes of others, and render their happiness necessary to him, though he derives nothing from it, except the pleasure of seeing it.” His two great books grapple with the symbiosis of altruism and self-interest.

Gould mentions and then ignores what differentiates humans from flora and fauna. Again, bamboo and cicadas evolved their calendrically odd cycles to prevent predators from exploiting their cycles. No species can predict their next flourishing, Gould says, except “one peculiar primate that records its own history.” And therein lies what he and others miss about Smith.

Humans record their histories and, since the dawn of writing, vast quantities of those records entail contracts covering commerce, property, marriage, bequests, and other aspects of human life. Charity, courtesy, empathy, and sympathy are integral parts of the self-interest that enables Smith’s economic agents to live in harmony. Like others, Gould conflated market economics with the cartoonish survival-of-the-fittest Social Darwinism of Herbert Spencer and his ilk.

Having said my piece, I will retire to my deck, listen to the music of the cicadas, and perhaps send a few checks to my favorite charities.