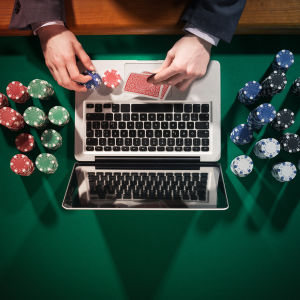 When a Republican holds hands with Dianne Feinstein, odds are good the deck is stacked and the game is rigged.

The Republican in question is Lindsey Graham of South Carolina, who recently co-signed a letter with Feinstein to Deputy Attorney General Rod Rosenstein urging the Justice Department to leverage an ancient law — the 1961 Wire Act — to put the kibosh on a modern phenomenon: legal online gaming.

The Wire Act was written at the behest of then-Attorney General Robert F. Kennedy to combat the interstate laundering of money generated via backroom betting on sporting events, such as horse racing and boxing. The “wire” part of the act’s name referenced the transfer of illicit money across state lines.

In other words, the act was written specifically to target illegal, off-the-books sports betting — which the Mafia used to rake in millions in off-the-books income on which it avoided paying taxes.

It was, fundamentally, an anti-racketeering law.

It was certainly never intended to outlaw legal online gaming, things like online poker and state lotteries. All of the foregoing are legal businesses and generate a great deal of on-the-books tax revenue for the states in which these activities are permitted. The gaming is also strictly regulated by state authorities.

So why the letter? And why Graham?

Because of Sheldon Adelson, the billionaire casino magnate. He makes a very healthy living via gaming. But he does not like online gaming because it sidesteps his gaming operations, which require patrons to physically be in Las Vegas, where his casinos are. They must come to him — and that usually means also springing for an expensive hotel room as well as food and all the other things.

People who game online can skip all that — and also skip doing business with Adelson. And that is the real problem.

It irks Adelson that the internet is cutting into his business. He faces the same competitive pressure that bookstores and other “bricks and mortar” retailers are having to deal with from Amazon.com and other online storefronts that do not have to have physical storefronts and so are able to sell for less as well as more conveniently, giving them a competitive advantage.

But should online competition be made illegal?

Adelson not only thinks so, he’s put his money — lots of it — where his mouth is. And into the pockets of politicians such as Lindsey Graham, whose interest in banning online gaming suddenly became as obsessive as that of his patron.

Adelson and his wife each personally donated more than the federally allowable maximum individual contributions to Graham’s re-election campaign (a part had to be refunded for this reason) and have hosted big-bucks mass fundraisers for the senator at the Venetian, one of Adelson’s Vegas casino-hotels.

But it’s not just Graham. Adelson has poured money into the war chests of politicians on both sides of the aisle, including former Senate Majority Leader Harry Reid of Nevada — a Democrat — and the Republican presidential campaigns of both Newt Gingrich and Mitt Romney, which together were reportedly the recipients of more than $90 million of Adelson’s largesse.

Ideology apparently doesn’t matter so long as everyone’s onboard when it comes to this particular issue.

Adelson has also given generously to the campaigns of state attorneys general and governors, notably in states where the issue of legalizing online gaming has been or will be on the table. For example, Adelson reportedly gave several hundred thousand dollars — via PACs — to the 2014 election campaign of Florida Gov. Rick Scott, where a debate just happened to be going on about legalizing online gaming.

This latest letter — which also talks up “our children” and makes it sound as though people have no ability to decide for themselves whether to visit online gaming sites, or buy lottery tickets online — was probably triggered by Pennsylvania’s recent legalization of online gaming.

Clearly, online gaming is very much worth battling … to Sheldon Adelson. No one spends the kind of money he has spent — is spending — Just Because. His protestations that online gaming is “fools’ gold” has cost him a lot of real gold.

The kicker, though, is that Adelson himself has been the object of a federal money- laundering investigation. The very thing the 1961 Wire Act was specifically written to combat.

As opposed to legal online gaming.

He reportedly paid $47.4 million to settle that one. Kettle meet Black.

But unlike Adelson, state regulated online gaming isn’t unlawful, doesn’t line Mafia’s pockets and was never meant to be targeted by a law that was written nearly 40 years before there was such a thing as “online” anything.

It’s understandable that Adelson doesn’t like competition and would rather roll in the easy money he’s used to making. But using his money to sway politicians to outlaw his competition amounts to the Mafioso tactics the ’61 law was written to combat.