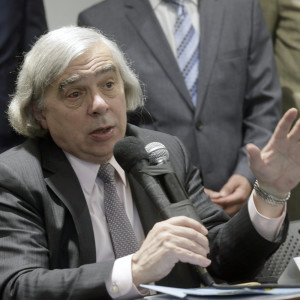 Administration ‘Confident’ of Ability to Catch Nuclear Cheating by Iran

Energy Secretary Ernest Moniz, testifying on Capitol Hill Tuesday, pushed back against a recent report raising concerns about the international community’s ability to detect whether Iran is cheating on the nuclear deal brokered by the Obama administration.

In an appearance before the House Appropriations Committee, Moniz said the administration, which is lobbying to push the Iran deal through a skeptical Republican Senate, is “quite confident” with the safeguards written into the agreement.

“As James Clapper, director of National Intelligence has said, you can never say 100 percent on any particular activity,” Moniz said. “But … the insight that we get is dramatically enhanced, certainly the barriers to trying a clandestine program are substantially higher. There are unparalleled verification measures in there. We feel quite confident about it.”

Moniz was being questioned by committee Chairman Harold Rogers, R-Ky., who cited a General Accounting Office interim report, released a week ago, that details lingering questions about the Joint Comprehensive Plan of Action, or JCPOA, that is designed to deter Iran from the development of nuclear weapons.

The JCPOA is considered a key legacy achievement for the Obama administration and for Secretary of State John Kerry, who brokered the deal.

In its report, the independent, nonpartisan GAO concludes the International Atomic Energy Agency, charged with enforcing the nuclear accord, “may face potential challenges in monitoring and verifying Iran’s implementation of certain nuclear-related commitments in the JCPOA.

The report set off a new round of criticism by Capitol Hill Republicans and GOP presidential candidates, including Donald Trump who regularly dismisses the agreement on the stump as “disastrous.”

The GAO report raised eyebrows among Democrats as well.

“This preliminary report raises real concerns about putting our national security interests into the hands of a multilateral organization that — although doing its best to meet overburdening new requirements — does not have the capacity, in terms of staff and funding, nor the authorities, in terms of compelling Iran to comply, in order to meets its charge of monitoring and verifying Iran’s commitment under the JCPOA,” he said last week.

Just three days after the GAO report, a French news organization reported Iran is in compliance with the nuclear deal, according to an internal IAEA assessment.

The Vienna-based agency’s first report card since the deal took effect on Jan. 16 showed Iran “has not pursued the construction of the existing Arak heavy water research reactor” and has “not enriched uranium” above agreed-upon levels, according to a report from Agence France Presse.