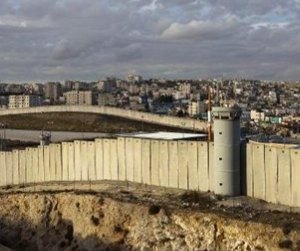 The separation wall between Israel and the West Bank.
[IS] Opinions

Advice From Israel: Build That Wall!

Thousands of migrants are ensconced on the Mexico-USA border, now even demanding extortion money – $50,000 for each migrant – to return to their home countries. Meanwhile, President Trump is locked in a head-to-head battle with Democrat leaders Charles Schumer and Nancy Pelosi over funding for Trump’s border wall, a conflict that may lead to a government shutdown. The Dems are insisting that upgraded patrols and technology are sufficient, while Trump is adamant in his stand that without a serious physical barrier, increased technology and patrols won’t do the trick. Despite the rancor on both sides, is it possible that a pragmatic examination of the “wall issue” could lead to a resolution?

Are Schumer and Pelosi really interested in a serious solution to the seemingly intractable problem of illegal immigration from America’s southern border or is this simply being used by the pair as a bludgeon with which to hammer the president? Assuming good will, that they are truly interested in resolving this major challenge to American sovereignty and laws, perhaps they would like to learn from Israel’s valuable experience in building a similar wall several years ago, and thereby stopping the illegal immigration in its tracks.

From 2010-2012, 55,000 illegal migrants – a huge number for a tiny country like Israel, which is barely the size of New Jersey – had entered from Eritrea and Sudan, settling mostly in the predominantly working-class southern neighborhoods of Tel Aviv and causing a sharp increase in murders and rapes in a city (and in fact a country) that had previously known only very minimal street crime. Terrorism was, and continues to be, a major challenge, but street crime in Israel is rare by American standards.

Under enormous grassroots pressure from the residents of southern Tel Aviv, as well as from residents of other depressed towns with substantial illegal immigrant populations, Israel’s government reached a decision to construct a high-tech steel wall on the Egypt–Israel border.

The barrier was completed over several years, with most of the work concluded by the beginning of 2015. By the end of 2015, 213 illegals had infiltrated Israel, a great improvement, but still not acceptable, which prompted the raising of the height to 25 feet and the installation of additional “smart-fence technology”. The results were remarkable. In 2016, just 11 illegals managed to get through, but in 2017, there was zero illegal immigrationfrom that border, prompting a fact-finding visit by US Homeland Security Secretary Kirstjen Nielsen to examine what America could learn from the Israeli experience in combatting what had become a major challenge for the United States.

In his conversations with the Mexican president and in other settings, President Trump has cited Israel’s wall as an example of what should be done at the US-Mexico border. “People want protection,” Trump said. “And a wall protects. All you have to do is ask Israel. They were having a total disaster coming across, and they built a wall. It’s 99.9 percent stoppage,” Trump said.

President Trump’s face-off with the Democrats on this issue is reaching a head, but the Israeli experience should be cited by those who truly want a solution, rather than just kicking the can down the road, in favor of throwing political hardballs back and forth.

Israel’s physical barrier has empirically worked, in halting the steadily increasing flow that had threatened to overrun its depressed neighborhoods with rampant street crime and massive social tension. Now no one is complaining, while simultaneously, legal productive immigration to Israel continues. Is any more evidence needed?

David Rubin, former Mayor of Shiloh, Israel, is the author of “Trump and the Jews”. He can be found at www.DavidRubinIsrael.com.