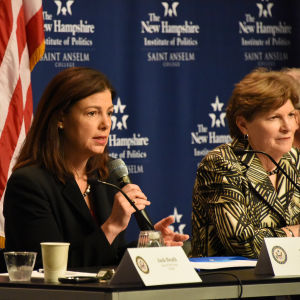 When Kelly Ayotte made the case Thursday for including Carly Fiorina in Saturday’s Republican presidential debate, the New Hampshire senator’s argument had nothing to do with gender.

Yet despite this straightforward approach, it’s hard not to discern a bit of larger symbolism in Ayotte going to bat for her party’s only female White House hopeful. She and Fiorina are a rare breed in American politics — conservative Republican women who defy conventional gender politics. They oppose government spending and abortion rights with equal vigor, and they’re both challenging traditional (read: liberal) notions of feminism even as a more traditional feminist may win the Democratic presidential nomination.

Of the two, Fiorina is more explicit about trying to change the dialogue. In a presidential field full of Republicans who attack Hillary Clinton, she’s perhaps the Democratic candidate’s chief antagonist. She talks constantly about wanting to debate Clinton in the general election and she’s attacked the former secretary of State harshly in the meantime. (“Unlike another woman in this race, I actually love spending time with my husband,” she said at a Fox Business debate last month.)

Fiorina also sought explicitly to redefine feminism in a speech on the subject in October. “Feminism began, of course, as a rallying cry to empower women,” she said, “to vote, to get an education, to enter the workplace. But over the years, feminism has devolved into a left-leaning political ideology where women are pitted against men and used as a political weapon to win elections.”

As a candidate, Fiorina has rejected “the progressive view of feminism,” talking instead about reducing out-of-wedlock births and supporting over-the-counter birth control.

Ayotte is also making this conservative case for contraception as she’s facing a tough re-election bid in New Hampshire. She even raises the issue in one of her early campaign web videos. Left-leaning women’s groups argue she’s trying to distract from her opposition to the Affordable Care Act and its contraception mandate — and that her plan would make birth control more expensive — but the senator’s stance allows her to square limited government principles with a message aimed at women.

It’s not her only such message either. Ayotte is running on her support for “flex time ” for working mothers as well as employers providing “reasonable accommodations” for women working during pregnancy. Almost all of the videos on her campaign YouTube page thus far are targeted at women, including a flattering feature story on CBS News about how she and other female senators work well together in a bipartisan way.

“While values trump gender, one thing we do find about women is they’re generally more collegial and focused on problem solving,” said Mindy Finn, founder of the conservative women’s group Empowered Women. Finn thinks conservatives like Ayotte and Fiorina are valuable to disproving the fallacy that all women agree on political issues.

“It’s still not as common for conservative women to run, but it’s becoming increasingly common,” she said.

Asked about the effect of Fiorina’s run, Finn said it gives young conservative women a model to emulate — a powerful right-of-center woman with a record of accomplishment.

“The reality is that there were many debates where the majority of pundits felt that she won,” Finn said. “She was able to move herself based on polling from the under card debate to the main stage. … She’s defied expectations.”
As of Saturday afternoon, Fiorina’s Super PAC was still pushing for her inclusion in ABC’s debate. The group’s creative team released a satirical promo for the news network: “On Disney’s ABC, we’ve Frozen Carly out, turned the debate Inside Out — all part of our Mickey Mouse operation.” Meanwhile, Fiorina’s campaign pledged to air a television ad in New Hampshire during Sunday’s Superbowl.