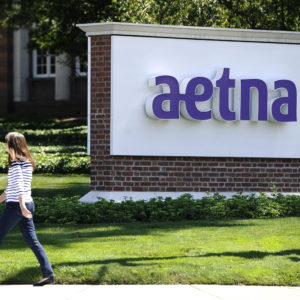 Health insurer Aetna announced it will begin offering employees and customers free and subsidized Apple Watches this week, a month after the third-largest health insurer in the U.S. said it plans to drop out of a majority of Affordable Care Act marketplace exchanges and raise premium prices in 2017.

Instead of claiming federal subsidies to offset the rising price of healthcare plans in all but four states next year, some of Aetna’s 23 million insured will instead get the option of letting the insurer subsidize one of Apple’s least-popular products in years, selling just 1.6 million units compared to 40 million iPhones in the second quarter.

According to a joint statement by Aetna and Apple, apps the insurer is developing for the device due out next year will let users pay their bills directly with Apple Pay, contact physicians, refill prescriptions and remind them to take medication. In exchange Apple no doubt hopes to boost the device’s flagging sales, down 55 percent in the second quarter. Part of Apple’s marketing has lauded fitness applications like a heart monitor and workout tracker on the smartwatch, which the company announced the second version of in September.

Aetna plans to offer the device at no cost to its almost 50,000 employees, but declined to tell Bloomberg how many non-employees might get Apple Watches. The deal is similar to others between fitness tracker device maker Fitbit and companies hoping a colorful, free calorie counter will encourage employees to adopt healthier exercise habits and bring down employers’ healthcare costs.

The announcement comes a month after Aetna said it will stop offering plans on Affordable Care Act exchanges in 11 of the 15 states where it currently does so, leaving markets in Pennsylvania, Florida, North Carolina, South Carolina, Texas, Kentucky, Missouri, Ohio, Illinois, Georgia and Arizona. Aetna will only offer plans on exchanges in Virginia, Delaware, Nebraska and Iowa.

Some 80 percent of Aetna’s more than 800,000 exchange customers will be forced to find new plans next year. Similar exits from exchanges this year by UnitedHealth Group and Humana mean 31 percent of U.S. counties will offer marketplace enrollees only one provider option this fall, according to the Kaiser Family Foundation. The group estimates 19 percent, or 2.3 million marketplace enrollees, will only have one choice of insurer in 2017.

Aetna claimed it made the decision after stating earlier this year it expected to lose $300 million on ACA plans, following the narrative of UnitedHealth and Humana, also reportedly posting hundreds of millions in ACA losses. The company has also announced rate increases averaging 13.8 percent for plans it will continue to offer on exchanges, and said it will offer plans outside of the exchanges in the states it exits in 2017, which will not be eligible for federal subsidies.

“We will see the dynamics of the market get tougher as we go forward if we don’t get those kinds of structural changes,” Aetna CEO Mark Bertolini told investors April after the insurer released its first-quarter 2016 earnings. “We look for the right cost structure, we offer the kinds of products that we believe people need, but at some point, unless we make these kind of changes, the market will be challenged.”

Democrats in the Senate led by independent Vermont Sen. Bernie Sanders and Democratic Sen. Elizabeth Warren say there’s another reason. Less than a month before Aetna’s announced Obamacare departure in 11 states, the Department of Justice filed a lawsuit to block Aetna’s bid to buy competitor Humana for $37 billion, saying the merger would hurt competition for private and exchange-purchased healthcare plans, leading senators to accuse Aetna of taking its ball and going home in retaliation.

“We are particularly troubled that Aetna’s decision to leave the ACA exchanges appears to have been motivated by the Justice Department’s decision to challenge Aetna’s proposed $37 billion merger with Humana — a deal that the Justice Department and many experts predicted would harm competition in the health insurance market and negatively impact the cost and quality of health care. Aetna could not have been surprised at the concerns raised by regulators about this merger,” Sanders, Warren and Sens. Ed Markey of Massachusetts, Sherrod Brown of Ohio and Bill Nelson of Florida wrote to Bertolini in September.

“You now must answer both to your shareholders and to the thousands of Americans who trusted Aetna with their health coverage.”