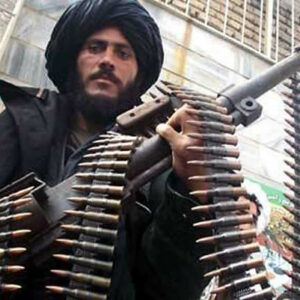 In the days since the U.S. completed its withdrawal from Afghanistan, the Biden administration has reiterated that it will “judge the Taliban by its actions, not its words.” But the Taliban’s actions are already failing to live up to the group’s flowery promises of reform.

On Saturday, it cracked down on protests in Kabul, assaulting women with rifle butts, tear gas, and metal clubs. It cemented its stranglehold over the country by overcoming resistance forces in Panjshir Province. Reports have emerged in recent days that the Taliban is preventing a handful of charter flights with Americans and Afghan allies from leaving Mazar-i-Sharif because, as Secretary of State Antony Blinken told reporters yesterday, there are some people “without valid documents” aboard that the Taliban says “at this point can’t leave.”

The starkest reminder that this is still the same old Taliban, however, came Tuesday when the group announced a governing team headed by many figures from its past.

The Taliban’s emir is Haibatullah Akhundzada, who has led the group since 2016. He ascended to power after a U.S. drone strike in Pakistan killed former leader Akhtar Mohammad Mansour. Akhundzada is a shadowy, reclusive figure, and is one of the Taliban leaders not on the United Nations sanctions list. The group tapped U.N.-blacklisted Mullah Mohammad Hassan Akhund as prime minister of the council of ministers. Akhund served as deputy prime minister and foreign minister when the group was last in power from 1996 to 2001.

Mullah Abdul Ghani Baradar— who became its No. 2 after the death of Taliban founder Mullah Mohammad Omar in 2013—will serve as acting deputy minister of the council. Baradar spearheaded negotiations with the United States and signed the February 2020 Doha agreement.

Perhaps most controversial among the picks is the group’s choice of Sirajuddin Haqqani as minister of interior. Haqqani, who authored a New York Times op-ed in February 2020 as deputy leader of the Taliban, is wanted by the FBI for his connection with a January 2008 attack on a hotel in Kabul that left six dead, including one American.

He is also leader of the Haqqani Network, a U.S.-designated terrorist organization with deep ties to al-Qaeda. And those ties don’t stop with Haqqani. “There are other Taliban leaders with links to al-Qaeda,” Bill Roggio, senior fellow at the Foundation for Defense of Democracies, told The Dispatch. “[Haqqani’s] just the most obvious.”

Tuesday’s announcement is almost assuredly the final nail in the coffin of the Islamic Republic of Afghanistan. There is nothing really new about the new government: It’s primarily composed of longtime Taliban leaders, many of whom were at the helm or in the leadership pipeline when the Islamic Emirate of Afghanistan was last in power.

Baradar told Al Jazeera the government will be “inclusive,” and spokesman Zabihullah Mujahid has claimed that the interim government “won’t be based on ethnicity.”

Unsurprisingly, claims of a kinder, gentler Taliban were false. No women, religious minorities, or members of the previous Afghan government are included, and nearly all of the group’s top leaders are ethnic Pashtuns. The Shiite Hazara community, which makes up a fifth of the nation’s population, is entirely unrepresented.

The Biden administration has thus far waffled on whether and how it will deal with the Taliban government. Gen. Mark Milley, chairman of the Joint Chiefs of Staff, told reporters in a press briefing last week that “it’s possible” the U.S. will work with the Taliban to fight ISIS-K, but Defense Secretary Lloyd Austin jumped in shortly after those remarks to say he “would not want to make any predictions.”

The Taliban cracked down on a second protest in Kabul that reportedly started off peacefully until Taliban fighters began firing their weapons into the air and beating back activists with clubs. There have not been any reports of fatalities stemming from the protests.

But experts see these crackdowns as a warning of what’s to come. In the two decades since the Taliban last ruled the country, many Afghan women obtained access to education and the job market for the first time. Now, many fear a return to a repressive system where they are unable to go out in public without male accompaniment and face harsh public beatings and floggings if they violate the government’s restrictions.

A version of this article first appeared at The Dispatch.

Rachael Larimore is managing editor of The Dispatch. She wrote this for InsideSources.com.