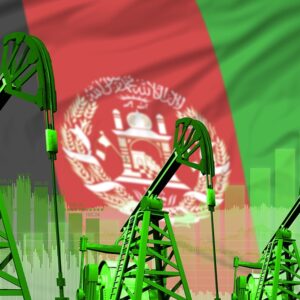 Afghanistan Should Be a Global Energy Player. It Won’t.

When the U.S. invaded Afghanistan 20 years ago, conspiracy theorists on the Left cried, “No War for Oil!” The real reason for the Bush administration’s invasion was to topple the Taliban government and make way for a lucrative oil pipeline sought by friends of oilman Dick Cheney.

The fact that these same progressives had just spent years accusing these same oilmen of being allies of the Taliban for the same reason was a mere “inconvenient truth.”

As the U.S. leaves Afghanistan in a cloud of chaos and political incompetence, will the return of the Taliban have any impact on energy policy going forward? In theory, yes. Not because of the war for oil, but rather the new war on oil.

Afghanistan may only have modest fossil fuel resources, but it’s sitting on “trillions of dollars” worth of lithium and other rare earth minerals vital to green technology like electric vehicles and solar power. This battle-torn corner of the world as the resources to be a significant player in the energy sector of the future.

Days before the U.S. exit, Chinese diplomats were posing for pictures with the Taliban. Those photos got people thinking that China will try to make Afghanistan part of its One Belt One Road Initiative. That could mean – many years from now – China’s corporate takeover of key new metals and minerals.

The Coalition for a Prosperous America, a think tank and advocacy organization promoting domestic manufacturing, almost immediately called on the Biden administration to take preemptive action to deter or penalize China and Russia should they seek to partner with the Taliban to secure those resources.

Florida Sen. Marco Rubio (R) agrees. “The Chinese Communist Party (CCP) dominates the rare-earth market globally, giving them leverage over the United States and other nations,” he says. “We have seen Beijing weaponize access to rare earth supplies as a tool of coercion against Japan in 2010. The international community must work together to prevent Beijing from controlling Afghanistan’s rare-earth supplies, which would only strengthen the Taliban and CCP and we must send a clear message to corporations that they cannot, under any circumstance, import these rare earths.”

Sure, China would like Afghanistan’s resources. But they are more concerned with the Taliban going haywire in Pakistan, a One Belt One Road client state. There was a recent terrorist attack against Chinese workers there on July 14. Pakistan said those involved came from Afghanistan.

China’s tried to pull things out of the ground there before. In 2008, the Metallurgical Corporation of China and Jiangxi Copper took on a 30-year lease for the largest copper project in Afghanistan, called Mes Aynak. This giant asset of 11 million tons of copper has yet to be developed.

An internal Department of Defense memo way back in 2010 described Afghanistan as “the Saudi Arabia of lithium,” a key ingredient for Tesla batteries.

A 2017-18 report from the U.S. Geological Survey said Afghanistan has deposits of spodumene, a lithium-bearing mineral, but did not provide tonnage estimates, while the 2019 Afghan report made no mention of lithium at all because Afghanistan lithium isn’t being mined.

And neither is oil and gas.

According to the most recent industry data on Afghanistan oil and gas production, they produced no oil and produced 6.6 million cubic feet of natural gas. They imported and exported none of it.

The war on terrorism windfall for defense contractors is over. Oil services firms no longer have government contracts to keep them there. The Taliban isn’t hiring Halliburton, and Halliburton would look foolish working for them.

Afghanistan couldn’t afford them anyway. It is a poor country, poorer than Eritrea on a per capita basis, based on World Bank data.

Alaska Sen. Dan Sullivan (R) thinks the U.S. should not be importing critical resources from China, regardless.

“We have critical minerals here. Alaska has tons of gas. We should source that traditional energy, renewable energy, critical mineral energy, and minerals in America, never from communist China,” Sullivan said in a recent interview.

Afghanistan is a perpetual war zone. Who would want to invest a billion dollars in a mine or oil well? Imagine the protection that would have to be paid to the Taliban to stop their friends from blowing it up? There’s no infrastructure there. There’s plenty of fossil fuel and mineral riches in neighboring ‘Stans, minus the drama.

Write this down: When it comes to key global resources, Afghanistan’s riches will only ever look good on paper.

Kenneth Rapoza is a former WSJ correspondent in Brazil. He covered China as a senior contributor to Forbes beginning in 2011. He wrote this for InsideSources.com.