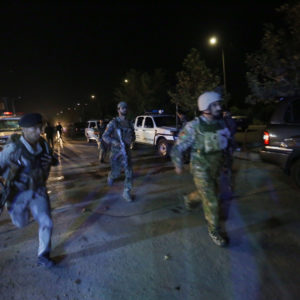 The Afghanistan War Is a Costly Failure

President George W. Bush justified the invasion of Afghanistan as a means to bring those who were responsible for the September 11, 2001, attacks to justice. Barack Obama’s administration can take credit with the removal and subsequent death of Osama bin Laden. However, once this accomplishment was realized, the globally supported International Security Assistance Force, with NATO partners, valued an exit strategy.

Little to no surprise though, the fighting continues. Violence remains potent within the rural districts of the Islamic Republic of Afghanistan as innocent civilians, and our troops, continue to die. The Obama administration de-escalated force involvement, and American and NATO forces remain on a mission to support regional and domestic stabilization. Donald Trump’s administration reauthorized overseas contingency funding early in his tenure to further contribute to these actions; however, the results denote a military failure that spans three administrations.

Based on recent findings from a leading U.S. government watchdog agency, failure is an understatement. According to the office of the Special Inspector General for Afghanistan Reconstruction (SIGAR), the U.S. government has wasted billions on failed stabilization and reconstruction efforts.

Thrusting blame for reconstruction and stabilization failures primarily on the Obama administration, the efforts to stabilize Afghanistan after years of fighting are a mess. Obama is responsible for his failed cleanup efforts. Bush can’t be dismissed for his warmongering. And Trump? He is complicit for continuing the war.

In total, the American taxpayers have bankrolled the conflict for hundreds of billions. From SIGAR’s findings in a different report, $15.5 billion of that commitment has been wasted one way or another. The agency acknowledges this total accounts for a part of the waste. One report was spurred from a request submitted by congressional representatives in September 2017. Congressman Walter B. Jones of North Carolina, with colleagues Peter Welch, a Democrat from Vermont, and Tim Walberg, a Republican from Michigan, filed their request with the Special Inspector General for Afghanistan Reconstruction John F. Sopko. The expected result was a dollar amount that represents total “waste, fraud, and abuse” SIGAR has investigated.

Jones, Welch and Walberg further justified the request as a means to also advocate for continued oversight. Sopko, in return, provided the requesting members with a report and findings that took 10 months to formulate.

“Our assessment included a total of 238 audits and inspections, 475 closed investigative cases, and 51 special projects that we completed during that period. We assessed the total value of the projects, programs and cases reviewed to be approximately $40.7 billion, or 32 percent of the $126 billion that has been appropriated for Afghanistan reconstruction,” an enclosure attached to Sopko’s response letter to Congress reads. Consequently, the scope of this work delivered a staggering number — being the $15.5 billion sum.

Another recent report from SIGAR documenting the efficacy of the central government corroborates further characterizations that the U.S. government’s financial commitment to reconstruction is costly. Citing a characterization from the Department of Justice calling the Afghan government “largely lawless, weak and dysfunctional,” SIGAR concludes that American costs increase due to influential, corrupt actors.

For example, this report covered the loss of influence in Afghanistan’s contested districts. The watchdog concluded that the Afghan central government’s control and power has diminished by 16 percent, according to data obtained since November 2015. In turn, those regions lacking government influence turn to the control or influence of insurgent groups has increased by seven percent. This significant shift of power can be attributed to pure force and corruption of local officials and ministries.

Insurgent control is at a low compared to past years, according to this report. Overall central government control continues to diminish further. The central government’s attorney general’s office also has failed to commit to the full initiative of stamping out corruption. SIGAR representative Jennifer George-Nichol characterized this finding regarding the AG’s failure as an indicator of the office’s “poor record of prosecuting powerful and influential corrupt actors.”

Failures, including this, have attributed to a “taxpayer black hole,” as characterized by the last three administration’s collective inability to withdraw American military forces. Through recent actions by the Trump administration, the costs will continue to increase. Trump has positioned for peace talks between Taliban political envoys and the United States; however, these negotiations can’t deteriorate.  Though speculation, failed negotiations could be detrimental to the existing U.S. federal budget.

Obama’s negotiations, though welcomed, failed. The only solution is a lasting and robust international accord between Taliban political envoys and the United States. We can’t legitimize the Taliban organization; however, we can’t dismiss their requests in peace negotiations.

Effectually, the real settlement that will result in lasting peace within Afghanistan is a coordinated political agreement that also includes the legitimate Afghan central government. Policymakers need to divert American funding from Afghan officials as peace between Taliban leaders and the conflict’s partied governments is negotiated. Until that happens, the Afghanistan war remains a costly failure that several presidents — and world leaders — have to account.