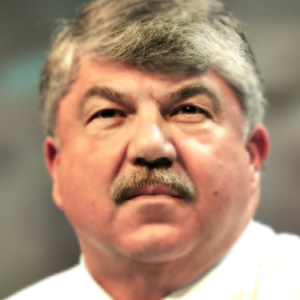 As Republicans aim to attract aggrieved white workers in this year’s presidential election, the American labor movement faces an unsettling reality: some of its prospective voters, particularly men who might support union causes, may embrace the politics of racial resentment led by GOP front-runner Donald Trump.

It was in this context Thursday that Richard Trumka — president of the 12.5 million-member AFL-CIO, the nation’s largest union organization — made a new push to condemn racism and xenophobia in the campaign.

Trumka headlined a panel at his group’s Washington headquarters, “Dog Whistle Politics: Race Baiting and Right Wing Populism in the 2016 Election,” and cast divisiveness as detrimental to the interests of all working people. He later told InsideSources that Trump’s bigotry is “far more overt” and “far more pervasive” than anything he’s seen from previous Republican candidates.

“I mean, it’s his strategy,” Trumka said. “His campaign is based on racism.”

Trumka’s comments followed the release of a new report for the AFL-CIO, “Race and Economic Jeopardy for All: a Framing Paper for Defeating Dog Whistle Politics.” Written by law professor Ian Haney-López of the University of California, Berkeley, the document warns of “the gravest threat facing the labor movement and indeed our democracy: the power of wealthy elites to use racial scapegoating to turn working people against each other and against good government, allowing them to seize ever more wealth and power while hollowing out the working class.”

To push back against “divide-and-conquer politics,” Haney-López proposes that labor increasingly “connect race to class, and class to race” in its activism.

“Dog whistle politicians constantly warn that liberal government and unions care more about appeasing minorities than about protecting hardworking whites,” he writes. “This drumbeat makes it risky for labor to mobilize around nonwhite concerns, because it can make conservative accusations ring true to many white workers.”

“But the solution cannot be to avoid race and to exclusively address class interests,” he continues. “To talk solely about economics leaves racial demagoguery unchallenged, allowing it to continue dividing workers. It also leaves workers of color alienated and angry that the labor movement is ignoring the gross injustices they confront.”

Joining Trumka and Haney-López to discuss all of this on the panel was Democratic pollster Stan Greenberg, journalist Tsi-Tsi-Ki Félix and Heather McGee, president of the liberal think tank Demos. In addition to the new report, the group talked about how many Americans — including young people — are even skeptical of the need for a labor movement.

“We’ve developed a narrative that individuals rise and fall on their own merit. And if that’s true, then you don’t need collective enterprises like unions,” Haney-López said. “You’re on your own, and if you succeed you should keep everything. And if you fail, blame yourself but do it quietly because we don’t want to hear your misery. That narrative is absurd on it’s face.”

Yet even many liberal Millennials buy into the narrative, as McGee detailed. She acknowledged members of this generation supporting interracial marriage, but said they don’t perceive persistent systemic racism.

“Of course Millennials are pro-individual liberty and falling in love with whoever you want,” she said. “It’s Romeo and Juliet! But on the question of how racism lives today, which is embedded in fundamental questions about the power of government and labor unions versus the markets —  a subtler and deeper but more powerful and strategic form of racism —  it is up for grabs.”

Haney-López concurred. “We don’t just need a libertarian liberalism that says, ‘Free to be you and me’ as individuals,” he said. “We need New Deal liberalism that says we have an obligation to recognize our shared humanity and take care of each other.”