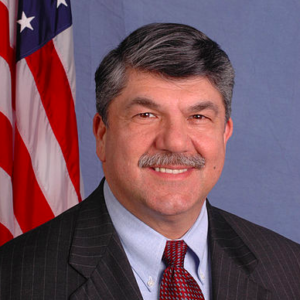 The American Federation of Labor and Congress of Industrial Organizations (AFL-CIO), North America’s largest labor federation representing some 12 million workers, opposes the Green New Deal “as currently written,” according to the organization’s leader.

The announcement from AFL-CIO president Richard Trumka came during an event hosted by the nonprofit Economic Club of Washington, D.C.  During a panel, Trumka was asked about his position on the signature climate change proposal of progressive Democrats and he responded with concern and frustration.

“We weren’t part of the process [in drafting the proposal] so workers’ interests weren’t completely figured into it,” Trumka said, according to reporting from the Washington Examiner. Trumka previously expressed skepticism for any radical climate justice proposal in September of 2018 during an address at the Global Climate Action Summit in San Francisco.

“Simply demanding that plants, industries and projects be stopped or shut down, with no plan for the people who are put out of work, no call for shared sacrifice, and no dialogue or solidarity with those whose lives and communities are dependent on carbon-based fuels, that poisons the well politically,” Trumka told the summit. “It is not good enough to simply call for an end to carbon emissions—we have a responsibility to think thoughtfully and strategically about how to actually make that change.”

Trumka’s comments also come as a symbol of his concern for the health of the industries and workers of those industries his federation represents.  In March, the AFL-CIO Energy Committee sent a letter to the proposal’s sponsors stating that it could cause “immediate harm.”

“We welcome the call for labor rights and dialogue with labor, but the Green New Deal resolution is far too short on specific solutions that speak to the jobs our members and the critical sectors of the economy,” read a letter signed by the United Mine Workers of America President Cecil Roberts and International Brotherhood of Electrical Workers President Lonnie Stephenson. “We will not accept proposals that could cause immediate harm to millions of our members and their families. We will not stand by and allow threats to our members’ jobs and their families’ standard of living go unanswered.”

Based on this context, the Green New Deal is widely opposed due to what opponents characterize as a lack of detail and reality. Benjamin Zycher, an economist for the conservative-leaning American Enterprise Institute, recently released a report he authored measuring the economic impact the climate proposal could have on the American economy. According to a press advisory announcing the release of his report, Zycher found that the Green New Deal would “yield no benefits while imposing substantial economic and social costs.”

Zycher confirmed this point of view to InsideSources, proclaiming that he was not surprised at the AFL-CIO’s opposition to the current form of the Green New Deal.

“The AFL-CIO opposition is understandable,” he said.

Zycher noted in his report that the Green New Deal would cost the economy almost $9 trillion per year. This total includes all costs to advance the American electrical grid to 100 percent clean energy sources and excludes the costs of the bill’s proposed massive shift away from fossil fuels in the nation’s transportation sector.

“The figures also exclude many of the economic costs of the adverse environmental effects of the GND electricity mandate and the costs of the inexorable increase in government authoritarianism attendant upon the GND,” the report reads.