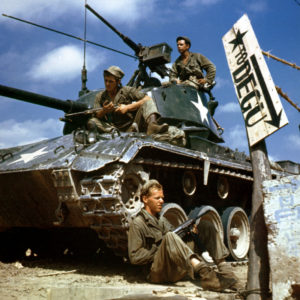 Crew of an M-24 tank along the Naktong River front during the Korean War.
[IS] Opinions

After 69 Years, Still Waiting for a N. Korean Apology

The 69th anniversary of the North Korean invasion of the South on June 25, 1950, conjures bitter memories and ridiculous controversy. The memories are bitter because the ensuing war resulted in the deaths of at least 2 million people, more than half of them civilians. The controversy is ridiculous because pro-North scholars, propagandists and activists persist in claiming that South Korea, and the United States, were responsible for provoking North Korea.

There was never any doubt as to who started the war. The Americans by the time it began had about 500 troops in South Korea, all of them in advisory or administrative roles. The United States, under President Harry Truman, had refused to provide the South with fighter planes, armored vehicles, armor-piercing anti-tank weapons or artillery needed to fend off attack. The division of the peninsula at the 38th parallel between North and South was no doubt artificial and arbitrary, but the Americans believed it was stable.

The American public, in the aftermath of World War II, including the Pacific War against Japan, had ceased to focus on Asia. Nearly nine months before the North Korean invasion of the South, the Red Army of Mao Zedong on October 1, 1949, completed the communist takeover of the Chinese mainland. Having expended vast sums in support of the anti-communist “Nationalist” regime of Chiang Kai Shek, the United States decided firmly against wasting American lives on the Chinese mainland. The United States would stand by Chiang’s regime on the island redoubt of Taiwan, to which he and his forces had fled, but Truman was firmly opposed to fighting a “land war” anywhere on the Asia landmass.

Secretary of State Dean Acheson underlined that policy in an address at the National Press Club in Washington on January 12, 1950. “A new day” had “dawned in Asia,” he said. “We can help only where we are wanted and only where conditions of help are really sensible and possible.”

Specifically, he sketched a “defensive perimeter” from the Aleutian Islands, off the U.S. territory of Alaska, to Japan and then on to the Ryukyu Islands, as he referred to Okinawa, annexed by Japan in the 1870s.  From there, the perimeter would extend to the Philippines, which the United States had ruled as a colony for more than four decades, then lost to Japan in World War II. The Americans, after driving out the Japanese in fierce fighting in 1945, recognized the Philippines as an independent country on July 4, 1946, the 170th anniversary of the American declaration of independence from Britain, but remained a tight military alliance.

Acheson did not have to remind his audience that the United States had huge bases in Japan, notably Okinawa, where U.S. forces had defeated the Japanese in the fiercest land battle of the Pacific War. In the Philippines, the Americans had returned to the same major air and naval bases they had held before the war.

South Korea was a different story. Acheson’s misguided outline of a defense perimeter did not include the Korean peninsula. The word “Korea” did not appear in his remarks. U.S. intelligence was so terrible the Americans were unaware that North Korea’s new ruler, Kim Il Sung, a Soviet army officer in Khabarovsk during World War II, had been begging Mao and Soviet ruler Josef Stalin to support his dream of invading the South. Acheson’s vision of a new era in Asia made clear how ill-prepared, how unaware, were the Americans of the holocaust that Kim was about to perpetrate.

Older South Koreans remember the North Korean onslaught of 69 years ago. Many of them recall as children the sight of North Korean troops taking over Seoul, capturing young men and sending them to the North, never to return.

Middle-age and young people, however, seem to have forgotten. South Korean officials, anxious for inter-Korean reconciliation through dialogue, ignore the North Korean role. The topic has gone carefully unmentioned in summit talks between President Moon Jae-in and Kim Jong-un or, for that matter, between President Donald Trump and Kim. Obviously, it’s deemed too sensitive, a sure way to end all dialogue, a needless reminder of the past.

No one, however, should ignore the lessons of history. Kim Jong-un imitates his grandfather’s hairstyle and general appearance as well as his cruel repression of foes, real and imagined. It should be plain, by building up his nuclear and missile capabilities, that he would love to follow in his grandfather’s footsteps and absorb the South. South Korea and the United States both should demand that North Korea not only admit its guilt for the invasion of the South but apologize deeply.

North Korea has much else for which to apologize, notably the harsh dictatorial system that consigns tens of thousands to a vast gulag from which most never come back. While calling for the North to give up its nukes and missiles, South Korea and the United States should demand an end to the unspeakable abuses perpetrated on North Korean citizens, including release of political prisoners.

It would be unrealistic to think that South Korea and the United States are going to follow this advice, and it would be still more unrealistic to imagine that Kim would respond in any way other than to hurl rhetorical taunts and insults. North-South dialogue will be meaningless, however, without facing up to realities. One way to begin would be to call on the North to apologize for invading the South 69 years ago.