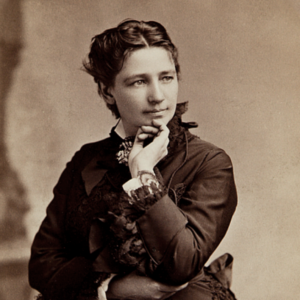 There’s been much discussion about whether a candidate can be too old to run for president. It’s not surprising, given that President Biden turns 80 in November and has indicated he plans to run again. If Donald Trump announces another run, we might have a late septuagenarian and octogenarian vying for office.

It turns out that while there is no law declaring an upper age limit for presidential candidates, there is a law mandating a minimum age. Specifically, one must be 35 at the time of inauguration.

Enter Victoria Woodhull. In 1872, Woodhull ran for president against Ulysses S. Grant — the first woman to run for that office. She wasn’t taken seriously for various reasons but had she won, Woodhull would have been 34 at the time of the inauguration, either nullifying her win or requiring a constitutional amendment.

Woodhull’s story reads like a Netflix drama. She was a descendent of the Massachusetts-based Scots-American Claflin family. Her father was a con man, committing arson of his family’s gristmill in hopes of collecting insurance. When his plan was discovered, the Woodhull family was penniless and forced to leave town.

Victoria would come to her family’s rescue. From an early age, Victoria maintained that she was guided by spirits and could tell fortunes. Her family used her claims to run a traveling medicine show where they also sold patent medicines.

At 15, Victoria married a patent medicine salesman, allowing her to escape her abusive father. Unfortunately, her husband was cut from the same cloth — an alcoholic, a womanizer and — eventually — an abuser. They had two children and would divorce 11 years later.

Victoria was always independent-minded and held a series of beliefs that did not jibe with the times. Maybe because of her troubled marriage and the difficulty women had in divorcing their husbands, Victoria came to believe in free love. She proclaimed a larger set of values, including women’s suffrage, labor reform, sex education, spiritualism, vegetarianism and licensed prostitution.

Not long after securing a divorce, Woodhull met her soulmate, Colonel James Harvey Blood, who served in the Union army and was said to be a kind and educated man. He also believed in free and monogamous love, though it is thought they were eventually married.

Woodhull was soon to build an even larger world presence. She became the spiritual adviser to railroad magnate Cornelius Vanderbilt after he lost his wife. Vanderbilt taught Woodhull about finance and banking and then chose to bankroll Victoria and her sister so they could start a brokerage firm. Theirs was the first female brokerage firm on Wall Street, and it did pretty well.

From her profits on Wall Street, Woodhull then became the first woman to start a weekly newspaper. The issues Woodhull fought for were highly unpopular in her day. Beyond women’s suffrage, and labor reform, sex education and licensed prostitution were flat-out radical. Her weekly paper featured her political platform that launched Woodhull’s crusade.

At only 33, but with the success of Wall Street and her newspaper behind her, Woodhull ran for president. The newly formed Equal Rights Party nominated her in 1872. Her party also nominated Frederick Douglass for vice president, though he never acknowledged the nomination.

While full of spirit and spunk, Woodhull did not receive any electoral votes, thus ending her campaign and a potential challenge to the Constitution.

Woodhull’s life is interesting for many reasons. First, there is her personal story — rich with drama and comeback. Then, there is her remarkably progressive platform. Who knew that in 1872 labor reform, sex education and licensed prostitution could be campaign issues?

That she wasn’t old enough to be elected should give us pause for thought. We don’t impose a “do-not-exceed” age limit. One possible explanation is that our forefathers could not foresee the rise in average life expectancy. A White male in 1900 lived on average 48 years. In 2020, the number was 75.

Nowadays, we live longer, but our minds, as well as our bodies, lose vigor.

Maybe we need to take that into account as the 2024 election nears. If Victoria Woodhull was too young to be sworn in, when are we too old?