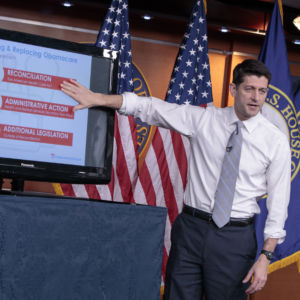 House Speaker Paul Ryan of Wis. uses charts and graphs to make his case for the GOP's long-awaited plan to repeal and replace the Affordable Care Act, Thursday, March 9, 2017, during a news conference on Capitol Hill in Washington. (AP Photo/J. Scott Applewhite)
[IS] Opinions

After the AHCA, the Gift of Introspection

The Affordable Care Act remains wounded. But the House GOP couldn’t even muster enough support to bring its partial repeal-and-replace bill — the American Health Care Act — to a vote. Both the ACA and the AHCA focused on rearranging the insurance system — shifting demand for care around while leaving the supply relatively untouched. After the GOP plan’s collapse, the ACA’s demise seems likelier to come from its own frailties than from willful effort.

Fortunately, this offers ACA opponents the opportunity to rethink patiently their traditional ideas and find new ones. Let’s start with three ideas that often top conservatives’ menu of policy proposals. Each has virtues, but none is the game-changer enthusiasts imagine:

In Virginia, in 1988, I bought a life insurance policy from a Pennsylvania company. For 29 years, it has had to ask only three questions: How was my health the day I purchased the policy? Am I paid up on my premiums? Did I die?

If I move to Alaska or Thailand, little or nothing in our low-maintenance relationship changes. I die, they pay. In contrast, a Pennsylvania company wishing to sell me health insurance must first build a network of doctors, hospitals, therapists and laboratories in Virginia. They then have to evaluate and process dozens or hundreds of medical expenses I incur yearly.

If an out-of-state insurer really wants to sell me health insurance, it simply acquires a Virginia license. Hence, Aetna, Cigna and United are familiar names across the country. Conservatives sometimes imagine residents of, say, mandate-heavy New York purchasing policies written and regulated under the laws of, say, mandate-light Idaho. While the idea sounds appealing, the logistics would be nightmarish.

EXPAND HEALTH SAVINGS ACCOUNTS: HSAs are designed to give patients “skin in the game” — personal financial interest in economizing. But once the patient reaches his annual deductible, catastrophic policies typically pay the lion’s share of expenses. Once that happens, there’s no longer skin in the game. In fact, the HSAs’ incentives largely vanish earlier — when the patient knows his annual expenses will surpass the deductible. HSAs can be valuable in curbing smaller expenses, but their effect on expensive critical or chronic care is likely minimal.

FIX MALPRACTICE LAW: One often hears claims like, “One-third of total U.S. health care costs result from malpractice actions and defensive medicine.” In fact, the best estimates place the number more in the realm of 2 percent to 5 percent — not trivial, but not the Godzilla conservatives, physicians and others often imagine.

Conservatives would do well to focus more on policies that encourage technological and managerial innovations to lower per unit costs of maintaining and improving health. To a considerable degree, this means unleashing competitive markets to shift care to non-physician providers, machines and patients themselves. Fortunately, digital technologies are poised to facilitate all three shifts.

A good place to start is modernizing the Food and Drug Administration’s increasingly antiquated system of drug and device approvals. Another important reform component is reducing the extent to which governments prop up incomes of doctors, hospitals, insurers, and drug and device manufacturers. The props generally cement current technologies in place and stave off innovative competitors.

A good aspect of tacking toward innovation is that it can garner an amiable hearing from people on the opposite side of the aisle. After the AHCA meltdown, the importance of broad support should be apparent.