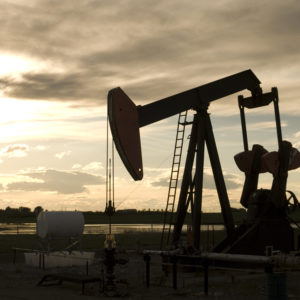 A lack of pipelines running between Canada and the U.S. has left oil producers in Alberta sitting on 35 million barrels of surplus oil, and the effects are being felt all the way to the Middle East.

At the start of the year, Canadian oil production cuts ordered by Alberta Premier Rachel Notley took effect, dropping output by 325,000 barrels a day or about 8.7 percent. The Canadians were trying to help preserve their own energy sector. Inadvertently, they also helped OPEC.

Soon after, Emerati Energy Minister Suhail Al Mazrouei, who stepped down as president of the OPEC in December, mentioned the unexpected Alberta cuts in a speech, saying that they prevented OPEC from taking more severe cuts. “Russia has changed, we have changed, the producers from the United States have changed as well. No one was expecting that the Canadian producers in Alberta would cut production. It happened!”

The production cuts were intended to stabilize the price of oil and to prevent Alberta operations from being forced to close. At this point, they are intended to last through the end of 2019, when the new Enbridge Line 3 begins operation and is able to help ease the shipping backlog.

“What’s happened in Canada–and what has been happening for a long time–is their oil is stranded,” Dan Kish, senior vice president for policy at the Institute for Energy Research (IER), told InsideSources, crediting resistance from environmentalists with slowing down the pipeline construction.

“This is entirely by design. This is why the environmentalists focus on pipeline projects like the Dakota Access Pipeline. If you can drive up the cost of shipping then the producers gets less money, which means less money to reinvest in new processing and production facilities,” he said.

In late November, before the production cuts were announced, Canadian oil was selling for as little as $11 per barrel at the wellhead, at times selling for as much as $50 less per barrel than West Texas crude.  A significant price gap is nothing new. Oil sands oil generally sells for about $10-15 less per barrel than West Texas crude because it’s more difficult to refine. The remainder of the recent price difference, however, reflects how difficult is has been for Canadian producers to get their product to market.

Pipelines are the cheapest way to ship oil. Shipment costs generally range between $5 and $13 a barrel. A lack of capacity has increased these costs and left producers waiting for a chance to ship their product. In the meantime, many have switched to shipping by rail, which costs between $12 and $20 a barrel. Operating under these constraints, Canadian producers aren’t always able to make the numbers work.

While two new pipeline projects (Keystone XL and the Trans-Mountain Pipeline) have been planned, environmentalists have been able to prevent delay construction, leaving Canadian producers little choice but to wait.

Part of this reflects the realities of bitumen, or oil sands, the sort produced in Alberta. Unlike hydraulic fracking, bitumen wells have high initial drilling costs but can maintain a consistent rate of production for decades. From a market perspective, they are operated almost like a mine, where operators can plan with a good degree of certainty how much can be produced over the lifetime of the operation and plan to recoup their high initial expenses over that period.

It also means that if wells are forced to close early, companies stand to lose large amounts of money. By cutting production and allowing prices to recover, the industry hopes to prevent well closures, something that Kish sees as driving Notley’s decision.

“If everyone is going to be starved to death by an overproduction of a commodity, typically there is an oil and natural gas conservation provision in the government’s powers and that’s why [Notley] acted,” he said. “Otherwise they would have been pulling the plug on existing operations.”

The Canadian story demonstrates the importance of infrastructure. Although production cuts may stabilize prices in the short term, they do not address the foundational problem of inadequate energy infrastructure. Industry analysts estimate that it will take four to six months to re-establish previous shipping patterns when production increases again.

The slow down will also decrease investment, including the purchase of specialized equipment manufactured by American firms and, thus, impacting future production.

“If the curtailments persist, obviously that’s going to depress overall levels of investment in the energy sector,” wrote Edmonton Chief Economist John Rose, who fears that the cuts will have a long term impact on the industry.

Others in the industry, however, are more fearful of increased reliance of government intervention to beat market competition.

“Oil companies will continue to push for access to the necessary pipeline infrastructure needed to grow their business, but now the door has been opened to rent seeking, or lobbying for government exemptions to get a leg up on the competition,” wrote Thomas Pyle, president of the American Energy Alliance. “This new government mandate will only contribute to the downward spiral of the Albertan oil industry in the long-run.”

What Americans may not realize is how similar the Canadian situation is to domestic drilling in places like Alaska’s Outer Continental Shelf. As with bitumen production, drilling in the continental shelf requires a significant upfront investment and companies stand to lose billions of dollars if their surveys are incorrect or market conditions make the shipping costs prohibitive. Despite the large profits energy companies post, sometimes their margins are very slim.

For the time being, both Canadian producers and OPEC will be watching to see how the markets respond, with both sides ready to increase production if the market seems to be recovering. This may not affect American domestic producers as much, but it has impacts on the world stage, including by increasing payments to countries like Russia.

It’s not just a question about infrastructure. It also shows how energy connects America to its allies.

“It is an untold story but the message of the Obama administration to the Canadian producers was [that] we aren’t a reliable partner anymore,” said Kish. “How is a pipeline between Canada and the United States not in the interest of both countries?”