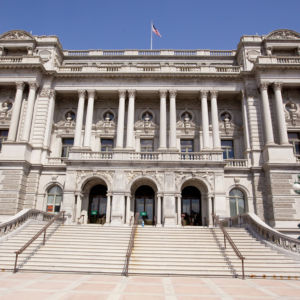 House Republicans want the Library of Congress to use the term "illegal alien" to describe people who came to the United States illegally. Democrats are opposed.
News

Debate on illegal immigration to the United States is, among other things, a war over words. What do we call people who come here illegally? And who gets to decide that? Should popular perception of certain language change legal terminology?

These questions are back at the forefront in Congress this week, after a committee in the Republican-controlled House approved a plan directing the Library of Congress to resume use of the term “illegal alien,” which it discontinued in March. The library’s rationale was that the term “has become pejorative” and should be replaced with “noncitizen” along with references to “unauthorized immigration.”

Jon Feere of the Center for Immigration Studies, which seeks to restrict immigration, thinks the term is innocuous. “It can be a legal alien, like a tourist, or an illegal alien, like someone who overstays their visa,” he told InsideSources.

In Feere’s view, the goal of changing language is to blur the distinction between legal and illegal immigration — proper and improper behavior — and “prevent any clarity of conversation on this issue by controlling the discussion and controlling the language.”

Democrats, unsurprisingly, see it differently. Texas Rep. Joaquin Castro — who along with his twin brother, Housing and Urban Development Secretary Julian Castro, is a progressive rising star — defended the Library of Congress in a statement Monday.

“We shouldn’t be using a harmful, dehumanizing term like ‘alien’ to categorize individuals who contribute so much to our country,” he said. “In the past, as society has come to understand the pain certain words can cause communities, we’ve done the right thing and eliminated those terms from our acceptable vocabulary.”

California Rep. Linda Sanchez, chair of the Congressional Hispanic Caucus, used even stronger language. “Referring to an entire community as ‘illegal’ is dehumanizing and antiquated,” she said in a statement. “If Republicans had it their way, they might still be referring to Mexicans as ‘wetbacks.’”

New York Times writer Emily Bazelon wrote last year about the “unwelcome return” of the term “illegals” to American politics. ‘‘It dates to the 1924 Immigration Act, when the United States solidified a quota system for immigration, which was explicitly racial,’’ Yale historian Stephen Pitti told her.

But one issue Bazelon raised, the fact that “advocates for immigrant rights” favor “undocumented” terminology, is part of what Feere objects to about the Library of Congresss — and the Associated Press, which discontinued “illegal immigrant.” Taken together, he sees these shifts as a wholesale acquiescence to activists by both government and media.

“The media has almost entirely embraced the demands of the activist crowd, and it’s unfortunate, because it results in the public respecting the media that much less,” he said.

Another example Feere cites is the use of the charged term “amnesty.” He said there was a time when this, too, was less controversial, but he’s not surprised that those days are gone.

“The people who are really behind the scenes trying to warp our language fundamentally believe that there’s no difference between a citizen and a person who waltzes across the border and evades our border patrol,” he said. “There’s really no way to describe illegal aliens in a way that will appease them, until we’re just referring to them as fellow citizens or Americans.”