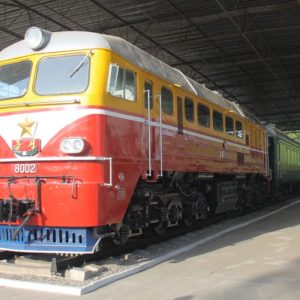 All Aboard on the Korean Peninsula

Rail travel has a special fascination for me. My home in New Jersey was near the tracks of the mighty Pennsylvania Railroad, about 45 minutes from New York. I remember watching the trains roar by as a kid, counting the number of cars on the long freight trains with names of different railroad lines painted on the sides, waving at people staring out the windows of the passenger trains. A lot of them waved back, leading me to wave longer, as if bidding farewell to friends and relatives.

The trains are still running, but the “Pennsy” is long gone. Now the passenger trains are run by Amtrak, an amorphous quasi-national corporation, an acronym from the words America and track, carrying passengers all over the United States and into Canada. The freight are owned by an amalgam of huge carriers. So vital is freight service that often passenger trains are delayed, waiting while the freight trains rumble by, sometimes more than 100 cars carrying products for export and import, to and from around the world.

Railroads for passengers may seem old-fashioned, a lot slower than planes, less convenient than vehicles speeding to individual homes and companies, but there is a romance about railroads that never dies. It’s partly for that reason that the prospect of opening railroads from Seoul to Pyongyang is so alluring.

Imagine the fun of boarding at Seoul Station and getting off three hours later in central Pyongyang or perhaps going all the way to the Chinese border, crossing the Yalu or Amnok River at Sinuiju, stopping at Dandong on the Chinese side. Then there would be the east coast route, up from Busan to Gangneung and Sokcho, alighting at Mount Geumgang, then going up to the Rason special zone and across the Tumen River on the way to Vladivostok.

It’s got to happen that way someday, but when? It’s exciting to think of South and North Korean planners and engineers getting together to figure out how and where to run the tracks, open the stations and get the trains rolling. They may be far from laying down the tracks, upgrading and repairing the rail system in the North, but you have to begin somewhere.

But wait. Aren’t there a couple of railroads already linking North and South? What about the single-track lines built largely by Hyundai Engineering and Construction nearly 20 years ago, one running up the west side, past Dora Station and on to the Gaeseong Industrial Complex inside North Korea? And then, on the east side, there’s the line  built to carry train loads of tourists to Mount Geumgang, also just inside the North.  Both these lines link up to North Korean tracks with the potential for going up the map of North Korea to China and Russia.

These lines were opened with such pomp and circumstance, such expressions of hope and optimism, that it’s hard to believe they never carried a thing. For a time freight trains did run once a week from Dora Station to the Gaeseong complex, but they were only doing test runs. And on the east side, as far as I know, no trains ever ran on the track that I saw gleaming a few hundred meters to the right of the road the last time I visited Mount Geumgang more than six years ago.

Rail service up the Korean peninsula, though, should be more than a luxury or fantasy. The Russians for years have been pushing for trains to carry freight from the port of Busan all the way up the east coast, into Russia and on to Europe. The possibilities are tremendous. North and South Korea could both assess huge charges for the use of the tracks. Passengers could be whisked up to Vladivostok on super-expresses and go from there on existing trans-Siberian tracks.

Neglect of railroads is just one more sad result of North Korea’s squandering resources on nukes and missiles. Shutting off traffic on the lines built by Hyundai was North Korea’s way of punishing the South for its pro-American policies.

In the process, North Korea was punishing itself. Now the North Koreans want to take advantage of the skills and resources that have made the South Korean system one of the world’s best. As always, the question is what they’ll give in return.