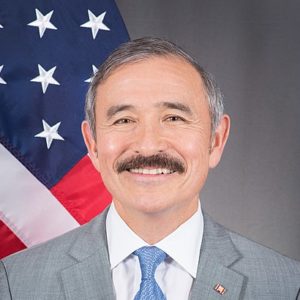 A young ensign is reputed to have told Adm. Bill “Bull” Halsey, commander of U.S. forces in the Pacific in World War II, “Your every wish is my command,” to which Halsey replied, “You’re damn right it is.”

Another former commander of U.S. forces in the Pacific, Harry Harris, now ambassador to South Korea, clearly feels the same way. He’s reported to have advised Korea leaders to act “in consultation with the United States” in dealings with North Korea. Otherwise, he said meaningfully, there could be “misunderstandings.”

Harris, who retired from the Navy as a four-star admiral before coming to Seoul, conveys the sense that his remarks comprise more than a wish list. He talks with authority, as if he’s issuing decrees, maybe orders, albeit couched in polite language for the benefit of an opaque audience that might otherwise not know how to behave. When he observes that “South Korea is a sovereign country and will do what it sees as best for its national interest,” he gives the impression of a condescending master patting the puppy, “Good doggie.”

Koreans don’t need to be reminded that the Republic of Korea is a sovereign country, they know that. It’s no wonder, then, that Korean officialdom responds with indignation to the ambassador’s comments.

From the Blue House to the unification ministry to the ruling Democratic Party, the view is that Harris was rebuking President Moon Jae-in for searching for a way to resume tours to North Korea, notably the Mount Geumgang zone, and also possibly reopen the Gaeseong Industrial Complex, all closed by Moon’s conservative predecessors. It clearly was, as a Blue House official put it, “very inappropriate for the ambassador to make such a mention in the media over remarks by the president of the host nation.”

Too bad, Harris’ comment led to questions that have yet to be answered. What did he mean when he said that “misunderstandings could trigger U.S. sanctions or U.N. sanctions”? The United States and United Nations have imposed no end of sanctions against North Korea for its nuclear and long-range missile tests, but sanctions for reopening the border to tourism or trade, however odious to the United States, are inconceivable.

“Things should be done in consultation with the United States,” said the ambassador. Was he implying the United States might sanction its American ally, South Korea, for defying Washington’s wishes?

Not to dispel illusions, but notions of the United States sanctioning South Korea are beyond absurd. As the Blue House observed, who comes and goes between South and North Korea is “to be decided by the government” — Moon’s government, not the American.

It’s possible the ambassador had not thought through what he was saying when he suggested the South Koreans “take this idea they have and run it through the Working Group.” What’s that, anyway? This “working group” rarely gets mentioned, but the State Department did say that Stephen Biegun, now deputy secretary of state, and Lee Do-hoon, special representative on the South Korean side, had “co-chaired a U.S.-ROK working group in Washington November 20.”

“The participants discussed complete denuclearization and lasting peace on the Korean Peninsula, as well as the implementation of U.N. Security Council resolutions and inter-Korean cooperation,” said the State Department, but is this “working group” imbued with the authority to make decisions? Are those two top-level officials the entire group, and what “work” did they do as a “group”? Were they sitting there with stats and maps talking about how to reopen North Korea while standing firm against any deal dictated by Kim Jong-un? How did the meeting conclude and when does this “group” meet again?

Harris’ remarks muddle the mystery, but for sure to judge from what he said the group is a channel for the U.S. side to manipulate the South Koreans out of doing anything on their own. That is, if such a group really exists.

Since his retirement from the Navy, Harris has gotten laughs by sporting a mustache. People compare his new sartorial look to that of the late Japanese Emperor Hirohito, to whom Harris, whose mother was Japanese, bears a certain resemblance. Such talk is a distraction, however, from the admiral ambassador’s evident mission, to impose a blockade worthy of Admiral Halsey on Moon’s desire to accommodate North Korea while Kim refuses to give up his nukes.

Talk about mission impossible.  The most experienced diplomats have gotten nowhere talking Kim dynasty rulers out of their nuclear program. Harris is not making things easier if he thinks his style diplomacy is likely to bend recalcitrant Koreans to Washington’s will.