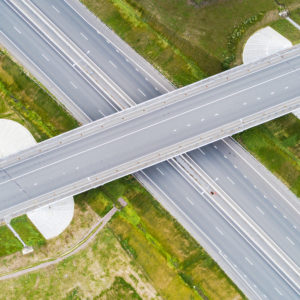 The Senate Commerce Committee in February took up how multiple transportation modes — trucking, railroads and ships — can best collaborate to maintain and upgrade a transportation network built to support the American economy and consumers. No such system can exist without a well-functioning highway system. Like anything in Washington though, the ability to do so comes down to money and how best to generate it.

While many in Washington, including the Chamber of Commerce and National Association of Manufacturers, continue to advocate for increasing the gas tax, a more immediate change could be enacted to help fund roads and bridges and address deteriorating conditions: charge heavy trucks by the mile and the weight of their vehicle, instead of the amount of fuel they consume.

The reasoning is simple.

Since 2008, Congress has taken $143 billion from the general taxpayer funds to pay for infrastructure projects out of the Highway Trust Fund. This is due to the clear shortfalls of the gas tax — last modified in 1993 — which cannot keep up with present demand. Cars and trucks are more fuel efficient, meaning that they fill up at the gas pump less often, which undermines the ability for gas tax revenues to pay for highway projects.

In the case of electric vehicles, which the federal government already subsidizes and which many progressive politicians hope will grow in popularity, drivers pay zero in gas taxes. Yet these vehicles use the roads the same as most drivers sticking with the combustible engine.

This has led politicians across Congress — both Republicans and Democrats — to increasingly embrace the notion of a vehicle miles traveled (VMT) fee or a mileage based user fee (MBUF), which would charge drivers based on the miles they drive.

Both the chairman and ranking member of the House Transportation & Infrastructure Committee continue to voice support for a change. And in January, a host of organizations — including Consumers Action for a Strong Economy — sent a letter encouraging Congress to move forward with national VMT pilot program. The idea is hardly new, as the 2009 National Surface Transportation Infrastructure Financing Commission recommended a wholesale shift to a VMT over time.

Yet American Trucking Association president and CEO Chris Spear was right when he recently told Congress such a transition would be complicated and require retrofitting for millions of automobiles. What Spear and the trucking lobby didn’t acknowledge, however, is that a VMT fee program for trucks could be enacted easily. These behemoths already have “electronic logging devices,” which track mileage, and these vehicles impose the largest, uncovered costs on the highway system.

While commercial vehicles are critical to the economy and pay a considerable amount in taxes, studies across the board show they do not financially make up for the burden they impose. Robert Atkinson, former chairman of the National Surface Transportation Infrastructure Financing Commission, says the implementation is “simple.”

“The truck receives a one-way GPS signal to allow it to identify its location and an onboard computer loaded with price-per-mile data for all the roads across America. Additionally, trucks would be equipped with wireless axle-weight sensors, allowing the onboard computer to calculate an additional surcharge based on pavement damage (a formula that factors the type of road and the truck axle weight). The computer would then remit taxes monthly to the federal Highway Trust Fund and to every state the truck traveled through.”

As the R Street Institute, who also signed the letter to Congress notes, such a system would also be more equitable. “Empty trucks on resilient roads and easy-to-fix roads would pay less for their trips than heavy trucks on costly-to-fix roads. The distinction makes sense, since repaving busy urban arteries is more disruptive and costs more than fixing less vital ancillary routes. Some states, like Oregon, have already embraced this approach to positive effect.”

Congress will continue to evaluate infrastructure financing over the next two years especially. The Trump administration seeks a large bill to revitalize our roads and bridges. While just one piece of the puzzle, a commercial VMT would be an easy place for lawmakers to start.