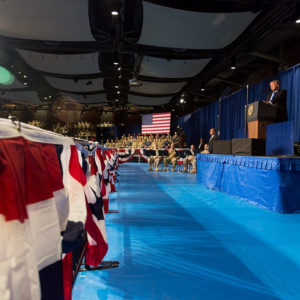 America Must Weigh the Costs of Continued War in Afghanistan

President Donald Trump’s primetime address at Fort Myer announced to the world that America’s longest war would continue longer. Presidents have often made the case for war and the use of force directly to the American people–a time-worn tradition employed because Congress has already given a blank check authorization to the executive via a 2001 Authorization on the Use of Military Force. Reactions to the president’s speech have expectedly ranged widely, but in truth, there’s no speech that Trump could have given that would satisfy everyone.

From the isolationist Bannonites to the resolute neoconservatives, criticisms seem to endlessly flow while no one can seem to turn on the solution spigot. If we should have learned anything from nearly 16 years of fighting in Afghanistan (and almost as many in Iraq), it is that the honest answer to the famous question, “tell me how this ends,” is both “we don’t know” and “possibly never.”

In announcing a resurgent U.S. troop presence in Afghanistan to prevent it from becoming a terrorist safe haven again, President Trump (likely unwittingly) was alluding to the idea that there are essentially two kinds of errors: errors of commission and errors of omission. Trump’s plan prioritizes avoiding an error of omission, the likes of which arguably set the conditions for the rise of the Islamic State in Syria and the Levant. However, what isn’t clear in the case of Afghanistan is that an error of commission in this case would ultimately be less costly—indeed we’ve already directly spent over $1 trillion on the conflict there. In the long run, blood and treasure spent in Afghanistan will continue adding up.

By premising our continued involvement in Afghanistan on preventing terrorist safe havens, the president is essentially implying that America is willing to spend an infinite amount to prevent a single terrorist incident. This logic gives license to authorize almost any action in Afghanistan—or anywhere in the world where terrorists can take “safe haven.” It seems the president is willing to make many errors of commission in an attempt to avoid errors of omission, even though terrorists bent on attacking the United States are more often those who are radicalized via the Internet at home than those who arrive from abroad.

Additionally, the president’s case did little to explain the costs of this continued involvement to the American people. The audience at Fort Myers was composed of active duty military personnel, a small, all-volunteer military caste that has disproportionately carried the Afghanistan burden. We’ve been at war for 16 years, but most of the American public has either willingly forgotten or deliberately ignored it; few if any polls measuring public attitudes towards Afghanistan have been taken since 2015.

The war doesn’t pierce the public consciousness because very few Americans bear the costs. But the public should be concerned about the opportunity costs of war—the U.S. budget is zero-sum, and there are more than a few fancy facilities that we built in Afghanistan. Meanwhile our bridges and roads at home are crumbling. We borrowed heavily to pay for our modern wars—debt that will be paid mostly by millennials and Gen X, the same people that fight and die in southwest Asia. Perhaps it is time for everyone to bear the costs directly via a tax. Maybe then the public will start paying attention again.

It seems that we can’t find the answer to the question “tell me how this ends” because we are either unwilling or unable to address the root causes of the political instability that enables extremist groups to thrive. You can’t kill your way to victory; the reservoir for terrorist and extremist recruitment is deep, and our military efforts in the region may be deepening it. We’ve also never been allowed to address the havens that exist in neighboring Pakistan (where we found and killed Bin Laden). Modern wars end when a satisfactory political solution is reached; Afghanistan is no different. So what is the political plan, and who will execute the plan if the Trump White House cuts the State Department budget by 30 percent?

Getting to an answer to that question—and the right policy—on Afghanistan starts with Congress owning this war, in turn transmitting that ownership back to the American people by a conversation about updating the outdated and nonspecific 2001 authorization for continued U.S. action in Afghanistan. Meanwhile, the Trump national security team needs to fill in all the details on conditions for success in order to give Americans a better sense of whether they would be willing to bear those costs. And finally, perhaps this is the moment to have a national conversation about what are acceptable costs to ensure America’s safety—including endless war abroad.

If all Americans agree that this is the case, then we can continue our Sisyphean march towards the 20th anniversary of American involvement in Afghanistan. But we should do so consciously and fully aware of the costs: continued blood spilled by valiant warriors who loyally take up the call to arms when so many others ignore or willfully forget that there is a war going on “over there.”