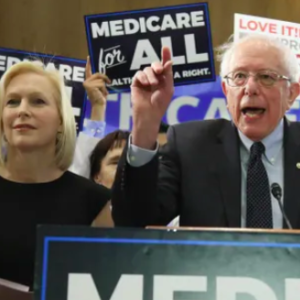 American Democrats Are Moderates. Their POTUS Candidates? Not So Much.

At the same time, the announced field of 19 (and counting) 2020 candidates features some of the most liberal, progressive figures in the party today. Setting aside former Vice President (and current fence-sitter) Joe Biden, Democratic voters looking for candidates who represent the traditional, centrist wing are largely left out in the cold.

Analysis of the votes cast by the 2020 candidates who’ve served in Congress reveals that this crop of candidates is among the most liberal — and most partisan — to ever seek their party’s nomination. How big is the divide?

Recent polls by Gallup and Pew Research both found that 54 percent of Democrats want their party to be more moderate as opposed to more liberal. According to the Wason Center’s data, the overall liberal vs. moderate/conservative breakdown among Democrats is 31 to 65 percent–almost a mirror image of the 2020 candidates themselves.

According to the ratings at ProgressivePunch.org, of the eight most liberal members of the U.S. Senate, five are running for the White House. That includes Sen. Elizabeth Warren, with a lifetime progressive rating of 99.36 out of 100– the highest in the Senate. She’s followed closely by Senators Kamala Harris, Kirsten Gillibrand, Cory Booker and Bernie Sanders.

The exception is Minnesota Sen. Amy Klobuchar, whose lifetime progressive rating is a “moderate” 89.72. To put that in perspective, actual moderate Democrat Joe Manchin has a rating of 65, nearly 25 points lower.

The average progressive rating of these six U.S. Senators seeking the White House? 96.8.

On the flip side, these same six Democrats have an average lifetime rating of less than six (5.45) from the American Conservative Union–best known for its annual CPAC gathering of conservative and far-Right figures.  The most “conservative” of the group is Sen. Sanders, whose 6.78 rating makes him look like a #MAGA supporter by comparison.

“It’s his support for the Second Amendment, or should I say ‘former support,'” ACU president Matt Schlapp tells InsideSources. “Plus Bernie is a contrarian and a lot of these votes are binary. In other words, he might have voted ‘no’ on a liberal bill we opposed, except he voted ‘no’ because it wasn’t liberal enough.”

But don’t doubt Sanders’ progressive bona fides. While he may trail a bit in the ideology ratings, he’s the single most partisan member of the U.S. Senate.

The nonpartisan Lugar Center’s Bipartisan Index uses both votes cast and legislative history to rank members of Congress on their willingness to engage with members of the other party. Sanders comes in at #100. And once again, close behind are Harris (#95), Booker (#88), Gillibrand (#84) and Warren (#68).  The exception is Klobuchar once again, whose record of bipartisanship, though modest, is strong enough to make her #23 on the bipartisanship list.

So is Sen Klobuchar and her “Minnesota Nice” the moderate alternative Democrats may be looking for?  Schlapp says no.

“She’s a midwestern moderate, right? That’s what people are saying? Look at her record. Last year her conservative rating was a five. The year before that it was a zero. She’s a nice midwestern moderate with a radical’s score,” Schlapp said.”

There are other candidates in the race, of course, including members of the House of Representatives like Rep. Eric Swalwell (lifetime progressive rating, 95; lifetime ACU rating, 4), and candidates like former HUD Secretary Julian Castro and former Washington State Gov. Jay Inslee who have no congressional record for comparison.

But these candidates do have positions on progressive issues like Medicare For All, the Green New Deal, eliminating the Electoral College and paying reparations for slavery. And those positions tend to be on the fringe –not just of American politics, but their own party.

For example, Sen. Sanders has widespread support among his fellow candidates for a Medicare For All plan that would move Americans onto a single-payer system and shut down the private health insurance industry.  Among the voters themselves, however, the support isn’t nearly so widespread. Only 17 percent, including 23 percent of Democrats, support ending private insurance.

Last weekend, 13 of the Democratic presidential candidates appeared at Rev. Al Sharpton’s National Action Network event and pledged their support either for slavery reparations or for a bill establishing a reparations commission.

Currently, only 20 percent of Americans— and just 28 percent of Democrats– support paying reparations for slavery. But 79 percent (or more) of the Democratic POTUS candidates do.

Perhaps this divide explains why Joe Biden remains both an unannounced candidate and atop the early primary polls.  Moderate Democrats may have the sway to pick their party’s nominee over the objections of their progressive party members.

Or maybe in a party where more than 60 percent of its members support moving America toward socialism, there just isn’t much room for moderates anymore.