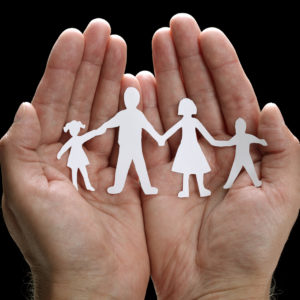 Washington, D.C. is full of polling. Rolling averages provide a numeric quantification of how Americans think about political scandals as they are developing and give day by day popularity rankings for nearly any public figure. Despite the vast quantity of data, one important sector of American life is comparatively understudied: the family. In an attempt to fill this gap, the Deseret News and the Center for the Study of Elections and Democracy at Brigham Young University began conducting the American Family Survey three years ago. The 2017 results were released at an event co-hosted by the American Enterprise Institute and the Brookings Institution on Thursday. The survey found that while views about the importance of family and marriage have remained consistent, respondents said that the problems facing families had changed.

“Once upon a time, the pollsters regularly asked Americans about ordinary life. These questions are largely missing today in favor of the latest poll on political news or political scandal,” said Karlyn Bowman, a senior fellow at AEI, who compiles and analyzes American public opinion using polling data. “Something very important has been lost.”

The American Family Survey asked more than 3,000 people from a broad demographic swath of the population what they thought about the role of the parent, the state of marriage and the family in the U.S., as well as their thoughts on hot button issues like healthcare, addiction, and immigration. On the whole, the survey showed remarkable consistency of opinion.

“Every year since we began conducting the American Family Survey, we have been surprised by its findings, and this year they were even more fascinating as we were able to look particularly at Trump voters, Clinton voters, and non-voters,” said Allison Pond, editor of the Desert News In-Depth team. “As our cultural and political divide seems to grow wider by the day, it is important to note that most people align in terms of how they live their family lives–but there are some glaring differences in how they view public policy.”
The survey’s results showed that 66 percent of Americans believe that marriages make kids and families better off financially, while 63 percent believe that marriage is needed to make strong families. In general, the researchers found that people believe that their own marriages are stronger than the institution overall. About half of respondents said that their marriage or relationship was stronger than it was a year ago, but only 8 percent believed that marriages in general were stronger.
Realities of modern life, including the increased use of smart phones, are changing families, but the survey is hesitant to attempt to assign causality. The researchers noticed that people who checked social media on their phones multiple times a day were more than twice as likely to believe that their relationship was in trouble than someone who did not check social media. At the same time, people primarily use their cell phones to stay in touch with family.
The biggest shift reported by the survey was that more people believe today that the most serious problems facing families are economic, rather than social or cultural. Since 2015, there has been an 11 percentage point increase in those saying that the biggest problems were economic, while the percentage of those saying that the biggest problems were cultural dropped by 17 points.
In previous years, the researchers used the American Family Survey to examine how Americans, despite political differences, hold many of the same opinions. This year, they opted to focus on differences, highlighting how Trump and Clinton voters differed in their familial and social lives. They found that, on the whole, Clinton voters were more socially connected to people outside of their families than were Trump voters. This led to some surprising results on a few seasonally-appropriate questions.
With Thanksgiving on the horizon, the survey also asked questions about how and with whom Americans celebrate. The results were unexpected.
“How many of you have read this story in the news about how people dread going to their extended family Thanksgiving?” asked Jeremy Pope, co-director of the Center for the Study of Elections and Democracy at Brigham Young University.
“It’s actually only about three or maybe four in ten Americans who will actually be at one of those events,” he answered. “Most people spend Thanksgiving with their immediate family and it’s actually Clinton voters who are just a tiche more likely to be out spending Thanksgiving with their extended family. It’s not a huge difference, but it is interesting.”
This focus on the surprising statistics rather than an analysis of the numbers makes the survey interesting reading. When it delves into specific policy issues, the questions aim to show how varied groups of people look at the questions differently, without assigning blame. For instance, when it comes to healthcare policy, Trump voters want more flexibility to opt out of insurance, low premiums, and tax breaks. Meanwhile, Clinton voters were more concerned about coverage for preexisting conditions, helping the poor afford insurance, and making insurance accessible for all.
A similar political split could be seen in responses to questions about immigration. The American Family Survey opted to vary the wording of a question that asked if respondents favored or opposed deporting illegal immigrants. Half of the respondents were asked if they favored deportation “even when it separates family members,” while the other half left out the reference to the family. The researchers found that reminding respondents about the possibility of breaking up families lowered support for deportation by 18 points.
Tradeoffs like these are at the heart of many major political debates today. Research like the American Family Survey helps to show how people come to different conclusions despite sharing many of the same foundational priorities, such as the importance of the family.
Follow Erin on Twitter.