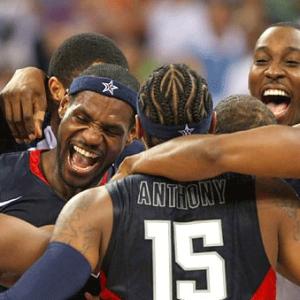 Americans hold firmly onto the belief that we have the most productive workforce in the world. But why has productivity failed to translate into international success in advanced industries? For an explanation, we should take a lesson from the failures of the 2004 U.S. Men’s Olympic Basketball Team, which was full of NBA all-stars but fell well short of gold.

As good as we are at manufacturing in high-tech, competitive industries (now or in the past), we are almost certainly better at basketball. There is simply more basketball talent inside U.S. borders than outside. The 1992 Dream Team won Olympic gold so easily that they didn’t call a single timeout during the entire tournament. The United States also went undefeated during the 1996 and 2000 Olympics, dominating all their competitors. The United States used to be similarly dominant in manufacturing, especially in advanced industries. After WWII, the United States developed a technological advantage that other countries could not come close to matching.

Enter the 2004 Men’s Olympic Basketball Team, a team once again loaded with top NBA talent led by two former league MVPs in Allen Iverson and Tim Duncan. Yet there were troubling signs from the beginning. The U.S. team only got together to practice 10 days before the games began. More importantly, the roster contained four small-forwards (all of whom played with similar styles), no three-point specialists, and only three guards. Star rookies LeBron James, Dwayne Wade, and Carmelo Anthony were selected more for their celebrity than their ability to contribute to the team. Argentina’s Manu Ginobli commented “I saw their roster and I knew we would beat them.” The team lost to Puerto Rico by a whopping 19 points, then to Lithuania, and then to Ginobli’s Argentina. They also barely scraped out narrow victories against Greece and Australia. Though the talent pool on many of these teams is more akin to American college teams than to the NBA, the United States was completely unprepared for the high-energy, guard-centric style favored by many international teams and the cohesion that comes from years playing together. Defenses would have to shut down one player at a time instead of taking on a true team.

Moreover, the U.S. performance in Greece was not a one-time anomaly. Two years earlier they had lost in the International Basketball Federation (FIBA) tournament, finishing sixth. They would lose again in the 2006 FIBA Championships. Even knowing that their lack of teamwork and over-reliance on one-on-one play calling left them vulnerable, the U.S. stuck to the same debilitating lack of coordination and collaboration, trusting individual talent to correct the assumedly anachronistic past defeats.

In the last decade, our manufacturing sector has been similarly bloodied and embarrassed on the international stage. U.S. traded sectors are frankly being outhustled and boxed out by international competition. The U.S. lost 37 percent of its manufacturing jobs between 1997 and 2012, a rate that eclipses almost every other industrialized nation. These losses were not predominately caused by superior productivity abroad, and, contrary to popular myth, are not currently being ‘reshored’ as part of some manufacturing renaissance. Most disturbingly these manufacturing losses mean a large and sustained increase  in our international trade deficit, including a deficit in high-tech goods every year since 2001, which shows no sign of recovery.

Unfortunately, our current outlook for export-oriented manufacturing reflects many of the weaknesses and oversights which doomed the 2004 Olympic squad. The current U.S. manufacturing strategy is akin to sending in a team of all-stars with little variance in playing styles and less international experience, negligible coaching, little scouting or preparation, no coordinated game plan and a roster only capable of challenging opponents in one-on-one, NBA-style showdowns. We tend to imagine firms competing directly with foreign competitors without influence from supporting industries, government policy, or international trade regulations. Just like in 2004, we are shocked when our “Dream Team” very predictably falls short. Quite simply, the U.S. forgot what it’s like to encounter real international competition and has adopted a dangerously laissez-faire approach to global trade.

Reeling from the 2004 embarrassment, new head coach Mike Krzyzewski led an all-star laden “Redeem Team” to Olympic gold in 2008. Gone were the shoot-first oriented small- and power-forwards, replaced by pass-first guards, three-point weapons, and faster big men. Players understood their roles and expected solid competition from their adversaries. After losing to the U.S. squad in the finals, Spanish center Pau Gasol commented: “It’s not that they’re a lot better individually, as a team they’re working better together.”

The United States has not lost a single game at a major international tournament since. Only a few weeks ago, the U.S. team won the 2014 FIBA world championship with a roster full of young talent, including sharpshooters Stephen Curry and Klay Thompson, dynamic point guards in Kyrie Irving and Derrick Rose, and defensive-minded post starters Kenneth Faried and Anthony Davis, who were selected largely for their ability to matchup with faster international big men and make hustle plays. More importantly, the team prepared for and respected their opponents and began practicing together over a month before playing the tournament. This team knew how to pass, how to stretch the floor, push the transitional attack and how to make the defense worry about all five Americans on the court. They made winning look easy. Watching this team, it was easy to forget that just 10 years ago the U.S. was chased out of a gym by Puerto Rico.

The same type of reversal is possible for U.S. manufacturing, which is far from dead. We still have a talented workforce, strong innovation potential, and are on the technology frontier. However, we need a reversal every bit as drastic as the steps that led to the basketball reversal. Much like we can’t go back and win the 2004 Olympics, some of our manufacturing jobs are lost forever. We can, however, ensure that future advanced industries are developed and cutting-edge goods are produced here at home.

1. Acknowledge that we are competing

First, the United States needs to understand that we face fierce international competition from countries capable of beating us at our own game. Currently, the U.S. manufacturing sector looks like we are still in our warmups preparing for an exhibition game. While we are used to easy wins, we are now facing determined opponents used to having to scrap for every victory.

In the minds of many analysts, policymakers and pundits, if a manufacturing firm goes out of business or moves overseas or if America loses an entire sector of production, it is because of the pure will of the “invisible hand” and has nothing to do with policy decision making. However, many times distortions are caused by foreign mercantilist policies, short-term market fluctuations, or the lack of appropriate American government action and policies which hamper U.S. firms and industries leading to “losses” that could have been prevented. We need to acknowledge that the global manufacturing environment has changed and adjust how we are “playing the game” accordingly.

The quickest way to a turnaround is to implement a national manufacturing strategy to boost productivity and competitiveness in competitive industries. Like in the Olympics, teams can’t win on talent alone. Neither can our manufacturing sector. It doesn’t matter if we have the most talented workforce in the world or the best innovation capacity if we have excessive corporate taxes, restrictive regulations, lack of support for pure and applied R&D, insufficient entrepreneurial support, and an immigration system that limits the talent allowed to enter the country.

A national manufacturing strategy is akin to the preparations and considerations of the U.S. coaching staff in preparing their team for international competition. A proper strategy can also counter policies by foreign governments seeking to poach market share in advanced industries with tariffs and non-tariff barriers to trade. Essentially, coaches and teamwork can help prevent firms from being muscled out, double-teamed, or caught in poor defensive positions. Coaches are also needed to appeal to the officials, in this case foreign governments and international organizations such as the World Trade Organization and teach firms how to avoid being bullied by cheaters.

Our insistence that the government should not pick winners and losers is our current strategy, and it’s a bad one. The Panglossian, laissez-faire fatalist ‘let the best team win’ attitude adopted by many Americans dooms our industries to deliberate inattention. However, the government does have a role in manufacturing competitiveness, just like a coaching staff has a role at the Olympics.

Politically, this standpoint is rather unpopular. The left believes that government does too much to bolster the success of the one percent (including big corporations), while the right points fingers at what they believe is “crony capitalism.” If there is to be any progress, critics on both sides need to realize government’s role in providing support on an inherently un-level international playing field. Backing domestic industries hurt by aggressive foreign non-market interventions or providing credit to exporters does not constitute the government picking winners, but instead provides necessary tools for the winners that have already emerged.

The Dream Team, however, is not guaranteed to always hail from the U.S. The next Michael Jordon, LeBron James, or Kareem Abdul-Jabbar could quite feasibly be perfecting his jump shot on a court in China. Americans tend to view their basketball players as by nature superior to those from other parts of the world. It is the same narrow-minded biases that lead to the often cited yet increasingly untrue blanket statement that America’s workforce and technology development are the most productive in the world. The idea of American exceptionalism is pervasive in both basketball and in export manufacturing. However, the simple truth is that if we do not make commitments towards fostering young athletes and young minds, America will soon be forced to recognize the absurdity of these assumptions.

Investing in research and design, both with federal funding and with incentives for private R&D will help keep the United States at the forefront of the international technology frontier. In addition, we need to enhance our overall STEM education and workforce development systems while also easing immigration restrictions and red tape for highly skilled workers and potential entrepreneurs. Cutting edge research and commercialization programs, combined with policies and institutions designed to ensure the most talented innovators continue to be based in America, will allow the United States to develop the next big ideas, products, and processes that will fuel future advanced industries and promote competitiveness and economic health for years to come.

America has the best basketball players in the world, but that mattered little when the team faced a determined teamwork-oriented opponent with experience in competitive international play. On the contrary, the stacked teams relied on one-on-one play and a tendency to select the top pure scorers even if they all play the same position. Unfortunately, our nation’s manufacturing sector is equally unfocused, ill-prepared for international competition, and unable to utilize its advantages. Like the 2004 U.S. Olympic Basketball Team, our manufacturing sector has forgotten how to overcome challenges to our superiority.

Adams Nager is an Economic Research Analyst with the Information Technology and Innovation Foundation.