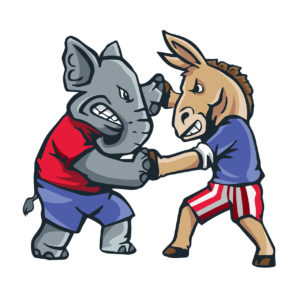 Intractable gridlock and increasing partisan polarization have many Americans pessimistic about the future of the nation’s political system. One group of political strategists believes it has found a way to “hack” the two party system and unblock logjams stalling the agendas in statehouses and in Washington.

Nick Troiano is the executive director of The Centrist Project, a Colorado based non-profit that is working to get Independents elected to key offices around the country. Troiano, who spoke about his work with InsideSources, is currently gearing up for a press event his group is hosting in Washington at the National Press Club on Wednesday. That event will be headlined by Alaska’s Independent Governor, Bill Walker, along with a number of other key state-level Independent politicians.

Troiano knows first-hand how difficult it is to win a competitive political race without the support of one of the two major parties. In 2014, Troiano, who was only 24 years old, earned national media attention and more than 20,000 votes in an unsuccessful bid to unseat Rep. Tom Marino, the Republican Congressman representing Pennsylvania’s 10th district. Then, as now, Troiano is convinced that the two-party system is failing the American people, and that electing a mere handful of thoughtful Independents could upend the political status quo in the people’s favor.

“The overall vision and attention of the group is just to get government working again, and to counteract a lot of the partisan tribalism that is standing in the way of getting things done,” said Troiano.

Tactically, The Centrist Project and its leadership recognize the prohibitive difficulty of building up a full-scale national political machine to rival the Democratic or Republican parties. Instead, Troiano’s group is eyeing a “fulcrum strategy.” Rather than attempting to compete for every seat in every race, Troiano, and the experienced operatives he works with, are targeting key seats in evenly split legislative bodies.

Take for example, the U.S. Senate, where the GOP maintains control with a three-member majority. If three of those seats were to be flipped into the hands of Independents, the thinking goes, then no party would be able to rule unilaterally, and both major parties would be forced to come together and iron out compromises on difficult issues. In other words, Troiano’s team is less dedicated to building a third party to take outright control of politics, as much as empowering “unparty” candidates to deny majorities to the traditional establishment forces.

“Every time an Independent runs for higher office, they start from scratch,” said Troiano, which is a dynamic his group is trying to reverse. Despite the fact that there are more registered Independents nationally than there are members of either major political party, the donor networks and campaign infrastructure typically just don’t exist to support the candidates, he explained. Particularly at the federal level, this can make running as an Independent even more difficult, especially if a candidate does not have personal wealth to draw from.

Earning The Centrist Project’s endorsement is not as simple as renouncing one’s party affiliation, however. While Troiano insists that there is room for disagreement on many issues within the budding movement’s ranks, there is also an expectation that the Independent centrists take a stand for good-governance on a series of issues. The group’s list of “principles” includes vows to be good stewards of the environment, to reform entitlement programs for fiscal sustainability, and to overhaul campaign finance laws, among others.

“We think of it as taking the best from both sides,” said Troiano. “57 percent of Americans don’t fit neatly with either party, they agree with Democrats on some things and with Republicans on others. What if we had a group of leaders that were able to draw on these ideas rather than just sticking to a party line?”

The principles outlined by The Centrist Project have been helpful in the effort to recruit politicians to join their cause. Owen Casás, a war veteran and an Independent in Maine’s state legislature, had already won his seat when he heard about the group in 2016, but decided to join their efforts because of how closely their platform lined up with his political priorities.

“Being outgunned and outnumbered, as a Marine, that’s exactly where I wanted to be,” said Casás of the race he won by a razor-thin margin of 12 votes. But for other prospective Independent candidates, he said that having a national group to help them organize mailings and basic campaign infrastructure could be essential in convincing quality candidates to run.

Once he won his seat, Casás said he began to realize that there were real perks associated with being unaffiliated to either of the major parties. For one, he says that he gets less pressure from party power-brokers to vote one way or another, which makes it easier for him to vote his conscience and his district’s needs than it might be for some of his colleagues. He also said that he paradoxically gets more face-time with leaders in the legislature who work harder to recruit his support for ballot measures than they otherwise would for back-benchers within their own parties.

“It’s doable,” said Casás of winning a seat as an Independent, “it’s hard work and its stressful, but welcome to politics. It’s doable.”