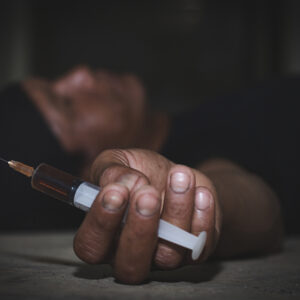 Over the last decade, a superpower has quietly invaded a peaceful country and killed hundreds of thousands of its citizens. The superpower isn’t Russia, and the victims aren’t Ukrainians. The weapons of war aren’t conventional weapons, they’re chemical weapons. The culprit is China, and the death toll is that of our fellow Americans.

The United States has been flooded with synthetic fentanyl and other opioids from China. The Centers for Disease Control and Prevention reported last week that 71,200 Americans died of overdoses of these drugs in 2021.

This poison has destroyed families, communities and is crippling our healthcare infrastructure. But the opioid epidemic is not just a drug problem — it’s a national security threat. It is well past time that we treated it with the seriousness of one.

Fentanyl presents a unique challenge to all levels of counter-narcotic efforts. Its synthetic chemical make-up is particularly deadly, its high concentration makes it nearly undetectable in small amounts, and its incredibly cheap production costs make it a desired alternative to other less deadly, more expensive drugs. Mexican drug cartels have found that they can increase their already significant profits by diluting drugs like cocaine and heroin with fentanyl.

What you may not know is that the precursor chemicals are manufactured in China and typically smuggled to Mexico, where the opioid is synthesized by drug cartels. From Mexico, the fentanyl is trafficked on the same path that many immigrants travel to cross the southern border. We have spent years politely asking China to crack down on the manufacturers and shippers of this poison, but despite the many promises and pledges, there has been no improvement.

It’s a mistake to view these American deaths as mere negligence. Our experience with COVID made it clear for all to see: the Chinese government will not take responsibility for the plagues it has unleashed on the world. While the Chinese government locked down travel in between Chinese cities, they permitted flights to leave the country and spread COVID across the world. This logic is extended to drugs: they will not crack down on the drug producers so long as the trade kills their enemies and enriches themselves.

We must change their calculus through any means necessary. Here’s an easy idea —  we should hit senior Chinese leadership where it hurts them personally: through bans on educational and tourist visas as well as real estate ownership for senior Chinese Communist Party leadership and their family members who wish to enjoy the United States. No more family trips by the “princelings” to buy Louis Vitton bags and Maserati’s in Los Angeles, no more buying luxury condos in downtown Manhattan. Once the flow of fentanyl stops, they can come again.

Harsher measures should be reserved for the drug cartels in Mexico. These cartels operate like many of the world’s deadliest terror groups, and they are responsible for the deaths of thousands of innocent civilians. They hold absolutely no regard for the dignity of human life, they torture and rape women and children and conduct mass murder and warfare around our southern border.

The media recently made a show of alarm and indignation when reports circulated that then-President Donald Trump considered firing missiles at drug labs across the border. The fact is these labs are just as dangerous to Americans as the terrorist camps that we spent decades targeting in the Middle East. Their deadly wares claimed more American lives last year than terrorists have in the past century.

The cartels maintain highly professional and sophisticated business conglomerates, develop advanced shipping channels, and maintain a standing security force. These drug networks act much like Hezbollah or Hamas, so it’s time to treat them like terrorists. Let’s unleash the full legal, economic, diplomatic and military might of the United States against this scourge.

To solve the opioid problem, it’s time for revolutionary thinking: Congress should pass new legal authorizations so that our military and counterterrorism officials have the legal tools to target drug labs and their owners. We should take the lessons learned from our wars against ISIS and al-Qaeda, and work with the Mexican government to stamp out the cartels. The departments of Justice and Treasury should work to dismantle and prosecute these terrorist networks all the way back to their origins in China.

This epidemic hasn’t been covered with the headlines we see from Afghanistan, COVID, or Ukraine that catalyzes Congress to act. The deaths from opioid overdoses may not pull at our heartstrings or fill us with anger, but they should. Every single American life is worth protecting. We’ve all read the newspapers across America that are filled with painfully short obituaries. Together they tell an unforgivable story: that the United States hasn’t done its job to stop this silent slaughter of American lives. Let’s fix that today.

Morgan Ortagus is the founder of POLARIS National Security. She wrote this for InsideSources.com.