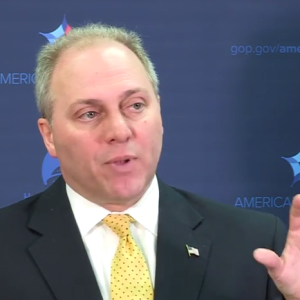 An Era that Must End with Scalise

It seems that when Republicans begin to make progress on issues of race, they become entangled once again by countless mistakes of the past.

One of those mistakes is House Majority Whip Steve Scalise (R-LA).

It was just a few years ago that Republican National Committee Chairman Ken Mehlman attended the annual convention of the National Association for the Advancement of Colored People. “Some Republicans gave up on winning the African-American vote, looking the other way or trying to benefit politically from racial polarization,” said Mehlman. “I am here today as the Republican chairman to tell you we were wrong.”

Mehlman was speaking on behalf of a party that had erred. The GOP’s “Southern Strategy” that sprung from the campaigns of Barry Goldwater and Richard Nixon had peeled the South from the Democratic column, but the Party of Lincoln lost its soul in the process.

Steve Scalise was one of the ultimate beneficiaries of the racially-laced politics of decades past.

The event now in question occurred in 2002. Scalise was a State Representative in Louisiana. He attended and spoke at the convention of the European-American Unity and Rights Organization (EURO), which was founded by former Ku Klux Klan leader David Duke. EURO fights for “white civil rights.”

For his part, Scalise, through a spokesperson, has noted he was giving a lot of speeches at the time and was unaware EURO was a hate group. But the EURO conference had been in the news. It was reported the Iowa Cubs baseball team was forced to stay at a different hotel to avoid the event. And of course, Scalise could have been tipped off to the organization’s purpose by the fact it was Howie Farrell and Kenny Knight, two close associates of Duke, who invited him to attend.

It also doesn’t help Scalise that he was one of only six members of the Louisiana House to vote against making Martin Luther King Day a holiday in 2004. Or that in 1999, he suggested the key difference between he and Duke was not issue positions but electability.

Is Scalise a racist? Let’s give him the benefit of the doubt, as Louisiana Democratic Congressman Cedric Richmond, who is black and has worked with Scalise on a number of issues, has done. “I don’t think Steve Scalise has a racist bone in his body,” said Richmond.

But does it matter whether Scalise is racist? No. Exploiting the politics of racial division is no better. That is why Republicans are where we are. The Southern Strategy set Republicans on a path from which we must decisively break.

Mitt Romney’s support in 2012 was 88 percent white. That’s unacceptable, and it speaks to an inability by the GOP to speak to non-whites. Republicans have an opportunity to reach out. We are closely aligned with minority communities in support of school choice. And we must work to better explain our opposition to well-meaning economic policies that ultimately place the greatest burden on minority communities.

Republicans have generally been doing better. We had several historic wins in November. Mia Love became the first black, female Republican elected to Congress. Former CIA Officer Will Hurd became the first black Republican elected to Congress from Texas. And Tim Scott of South Carolina was elected to a full term as the South’s first black Senator, of any party, since Reconstruction. Meanwhile, Kentucky Senator Rand Paul has been outspoken that the GOP brand “sucks,” and he has actively worked to reach out to minority communities.

These are steps in the right direction, but Republicans have a long road of atonement ahead.

Scalise is likely to survive without needing to resign his Congressional seat, but is this someone the GOP should continue allowing to serve as the number-three Republican in the House? Some Republican leaders have circled the wagons to defend him. Scalise may not be a racist, but his service in Congress is the result of decades of erred judgment and a willingness to abandon principle to gain power. This era must end with Scalise.