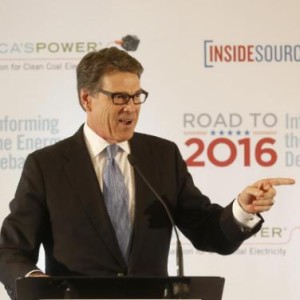 IMAGE DISTRIBUTED FOR ACCCE - Governor Rick Perry delivers remarks at the ACCCE/ InsideSources energy policy forum in Des Moines, Iowa on Thursday, April 9, 2015. The American Coalition for Clean Coal Electricity and InsideSources kicked off the first of six energy policy discussions leading up to the 2016 elections. (Conrad Schmidt/AP Images for ACCCE)
[IS] Opinions

Welcome to the Department of Energy. It is a cornucopia of scientific wonders, brilliant people and, to be true, some duplication and wasted effort.

Oil, natural gas and coal are not the overriding concern of the DOE. Until President Jimmy Carter created it in 1977, fossil fuels were the province of the Department of the Interior.

The DOE was preceded by the Energy Research and Development Administration. This was a short-lived agency that combined the non-regulatory functions of the Atomic Energy Commission with the Federal Energy Administration, a policy coordinating body.

To be sure, DOE has had a manful role in coal gasification, fracking and carbon capture and storage.

But its main role is to be the nation’s armorer; to build and maintain the U.S. stockpile of nuclear weapons, and to detect bad guys testing weapons in places like North Korea and Iran.

In your own state of Texas, as you must know, is the Pantex facility. That is where the weapons are constructed and dismantled. That is ground zero, if you will, of weapons making. That where the “pits” are assembled and disassembled. Weapons are designed and engineered in the weapons laboratories.

You will find that cleanup of nuclear waste — much of it from earlier weapons production — in places like Hanford, Wash., and Los Alamos, N.M., is a continuing and seemingly endless task that chews up talent and money.

Some of the other work of the DOE may surprise you. It was a major player in the human genome project and it helps U.S. companies improve their manufacturing technology. It has developed ceramics for all sorts of non-nuclear uses, like car engines. Its work with 3-D seismic and advanced drill bits has made the fracking revolution possible.

You are, in fact, about to lead the largest science department anywhere in the world.

When you get the feel of the place, one hopes that talk of disbanding it will disappear. Likewise wild talk about rooting out climate science, which has the department in shock. The DOE is not part of climate science conspiracy. Please examine your charge before you trash it.

The DOE national laboratory system is a national treasure, the science mind of the nation. It collaborates with dozens of universities.

If President-elect Trump is determined to renegotiate the Iranian deal, you will be a player. The present secretary, Ernie Moniz, handled the negotiations brilliantly for the treaty we have with Iran. He knew as much about the workings of a hydrogen bomb and its supply chain as his opponent, Ali Akbar Salehi, who also went MIT. If there is another negotiation as the president-elect has suggested, you will have to support the chief negotiator, the secretary of state, with expertise from your department.

First and foremost, the DOE is a nuclear agency, charged with making the weapons that protect the nation. But it also does some amazingly disparate things at its labs, from improving coal combustion to studying cancer to examining the very nature of matter. And, of course, climate science. It has been said that it takes a new secretary a year to find out what the department does.

Because the DOE operates in many states through the laboratory system, Congress rides it hard. Congressmen fight for dollars and projects in their states. An example — and one you will have to adjudicate — is the battle over whether to continue with the construction and operation of the mixed oxide fuel fabrication facility at the Savannah River Site. The Obama administration has said it should be terminated; Congress says no.

As there is throughout government, there is waste in the lab system. But it is a small problem compared with its huge value to the nation. A suggestion: work on making it even more user friendly to technology transfer. That is how we assure the future of U.S. competitiveness: science and more science.

You have a great charge, Gov. Perry, and it has very little to do with oil.