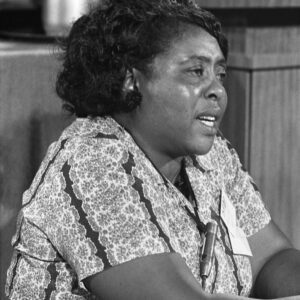 An Unlikely Civil Rights Leader Who Took on the DNC

The whole nation watched as a dirt-poor Mississippi cotton picker called on Americans to walk with her toward equality and justice.

On August 22, 1964, civil rights activist Fannie Lou Hamer sat nervously in front of the Democratic National Committee’s Credentials Committee at their convention in Atlantic City. The forty-six-year-old sharecropper with a sixth-grade education and a borrowed dress had come to the convention as a representative of the fledgling Mississippi Freedom Democratic Party to challenge the seating of Mississippi’s all-white party delegation.

Mississippi denied more than 95 percent of its Black citizens—who constituted nearly half its population—the right to vote. Hamer and her colleagues and supporters, including Dr. Martin Luther King, hoped to convince the committee to let the diverse Freedom party delegation sit on the convention floor and represent their state. Positioned at a table in front of the densely packed hearing room, with the muffled sound of television cameras whirring in the background, she folded her hands to steady herself.

“Mr. Chairman, and to the Credentials Committee, my name is Mrs. Fannie Lou Hamer, and I live at 626 East Lafayette Street, Ruleville, Mississippi, Sunflower County…It was the thirty-first of August in 1962 that eighteen of us traveled twenty-six miles to the county courthouse in Indianola to try to register to become first-class citizens.” Her white landlord, she told them, evicted her that night because, he told her, “we are not ready for that in Mississippi.”

Without notes and from her heart, Hamer recounted the struggles, terror, and violence she had endured trying to do the most basic thing a citizen of any country can do: vote. She described the death threats and gunshots, the brutal beating in 1963 she endured at the hands of the police because she was teaching others how to register to vote. Many audience members gasped; their eyes welled with tears. Her eight-minute plea ended with a question that haunted listeners: “Is this America, the land of the free and the home of the brave, where…our lives be threatened daily, because we want to live as decent human beings, in America?”

The white Mississippi delegates shook their heads in apparent disagreement. President Lyndon B. Johnson, watching live coverage in the Oval Office and eager to secure the Democratic Party’s nomination for the presidency, quickly called for a press conference in the middle of her testimony to draw the news media away from Atlantic City. Though a proponent of civil rights, Johnson feared losing the last vestiges of support from southern delegates, a powerful coalition of segregationists who held the Democratic Party hostage to white supremacy. Johnson needed to win his party’s nomination so that as president he could pass long-overdue civil rights legislation. He miscalculated. The television cameras in the hearing room had captured her entire testimony, and evening news programs replayed it and the ovation that followed.

Johnson would win his party’s nomination without Mississippi’s white delegation a few days later: they walked out of the convention, returned home, and campaigned for the anti-civil rights candidate, Republican Barry Goldwater. Once elected, President Johnson signed the Voting Rights Act of 1965, which enforced rights secured by the Fourteenth and Fifteenth Amendments of the Constitution. The act made poll taxes and literacy tests illegal, and voided other laws obstructing the rights of American citizens to vote. It provided for federal registrars to enter states with a history of disenfranchisement to monitor voter registrations and elections.

Four years later, in 1968, the Democratic National Committee denied seats to the all-white Mississippi delegation at the Chicago convention; they seated Hamer’s party instead, permanently changing the Democratic Party. Millions of people, including Blacks, the poor, the uneducated, and other minorities could finally vote.

Hamer continued to fight for equality and civil rights for nearly a decade more. Her extraordinary gifts—her unforgettable singing, her commanding presence, her deep confidence in God’s love—drew people to her. A deeply spiritual woman, Hamer found solace and strength in her Christian faith. Tested repeatedly and questioned often, that faith helped her survive and triumph. She endured trauma that would have driven others into darkness, yet she kept moving toward the light. She faced her enemies with amazing grace and forgiveness, channeling her anger and frustration into a fierceness that sometimes confounded them and their hatred for her.

Hamer’s hard-won gains are slipping away. In 2013 the United States Supreme Court overturned two sections of the 1965 act in Shelby County v. Holder, opening the doors to changes in voting laws in those states once subject to federal oversight, allowing the closure of thousands of polling sites, shortened voting hours, purging of voter rolls, and passage of strict voter ID laws. Today, more than 450 bills have been introduced across the country renewing suppressive voter laws and access to the polls. Thirty of them have already passed.

Hamer waged a civil rights battle that finally cost her life. Weakened by lingering debilitating effects from the beating in 1963, too poor to access good health care, she died in 1977 at the age of fifty-nine. But the seeds she helped sow germinated in fertile soil and her bold courage to stand up reminds us that at the center of any movement sits grassroots resistance and leaders like her.

Hamer might have worn a borrowed dress at the moment when the nation first took note of her, but the woman with the sixth-grade education still stands tall, holding a mirror to Americans and showing us how broken our democracy has become.

Dr. Kate Clifford Larson is a historian, lecturer and the author of the book "Walk With Me," The Story Of Civil Rights Activist Fannie Lou Hamer. She wrote this for InsideSources.