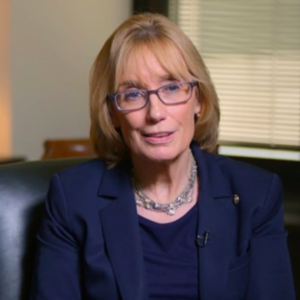 Between a tough 2022 map and retirements by incumbents in Pennsylvania and Ohio, Republicans haven’t caught many breaks when it comes to taking back the U.S. Senate next year. But last week’s Univerity of New Hampshire poll gave the GOP a glimmer of good news from the Granite State.

First-term Sen. Maggie Hassan’s poll numbers are problematic, to say the least. In a state that likes its incumbents and knows the former two-term governor well, Hassan’s favorable/unfavorable rating is a tepid 41/36 percent, or +5.

And while it’s not quite an apples-to-apples comparison, it’s worth noting that Sununu’s job approval among Democrats (52 percent) is higher than Hassan’s favorable number among all Granite Staters.

Not surprisingly, Republicans in D.C. are desperate for Sununu to challenge Hassan next year, while the governor insists no decision will be made until “well into 2021.”

“Senator Hassan has repeatedly beaten Republicans in tough years for Democrats, and she will resoundingly beat whomever challenges her next year,” New Hampshire Democratic Party chair Ray Buckley told NHJournal. “Her low unfavorable ratings are the same as Senator Shaheen’s, and Senator Hassan’s standing will only get stronger as election season picks up and people focus on her record of delivering for our state – from leading bipartisan efforts to end surprise medical bills to delivering a massive increase in funding to combat the opioid crisis.”

“Bipartisan efforts?” That’s not the signal President Biden is sending out. And, as with the Obama/Biden presidency in 2008, that could mean bad news for Democrats like Hassan in 2022.

“Senator Maggie Hassan has the distinction of being the weakest Democratic incumbent in the country,” says GOP strategist Patrick Griffin. “Worse, Democrats under Biden are already overreaching. By the time she has to face the voters again, they’re going to be tired of what the Democrats have been doing.”

And whatever it is Democrats have been doing when next year’s election rolls around, Republicans will be able to hold Hassan accountable thanks to the 50-50 Senate: Every vote Hassan casts will literally be “the deciding vote.”

If, for example, Democrats choose to push forward with Biden’s $1.9 trillion COVID bill, with its $15 minimum wage and multi-billion bailout to overextended states, it will be via a 50-50 vote and a vice-presidential tiebreaker. And Hassan’s “deciding vote.”

Will there be a vote to kill the filibuster? How about Biden’s plan for illegal-immigration amnesty without any increased enforcement? Student-loan forgiveness for affluent college grads paid for by taxpayers? Higher energy costs to pay for Biden’s version of the Green New Deal?

None of these issues poll well in the abstract, and they’re likely to become less popular as they get closer to becoming political realities — and Sen. Hassan may have to cast a vote on nearly all of them. And if President Biden’s flurry of progressive policy executive orders are any indication, there are likely many more tough votes coming down the legislative pike.

Yes, West Virginia’s Sen. Joe Manchin may shield Hassan from some of them. He’s already staked out his opposition on ending the filibuster and other progressive plans. But he also serves as a reminder of the power of a single vote in this unusual political moment. Any party-line partisan bill that becomes law will only do so if Sen. Hassan chooses to let it.

Still, Hassan is an incumbent. And she’ll have all the money she needs as Sen. Chuck Schumer tries to hold onto control of the Senate. Plus, speculation is rife within the NHGOP that Gov. Sununu simply doesn’t want to relocate his family to D.C. or become a legislator.

“You can’t beat somebody with nobody,” as the saying goes, and if Sununu and former Sen. Kelly Ayotte stay on the sidelines, there’s not much of a Republican bench.

That may be enough good news to keep Maggie Hassan in the Senate for another term.