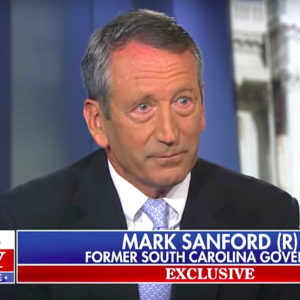 “I am here to tell you now I am going to get in,” Sanford told Chris Wallace on Fox News Sunday. “I think we need to have a conversation on what it means to be a Republican. I think that as a Republican Party, we have lost our way.”

Sanford has been discussing a possible run for weeks, and he spent two days in New Hampshire last month talking to party leaders and activists — including a stop at the Center Right Meeting in Manchester hosted by former NH House Speaker Bill O’Brien.  Sanford told NHJournal Sunday night that he will be back in the Granite State “sooner rather than later,” though no dates have been set.

Sanford enters a field that already featured former Massachusetts Gov. Bill Weld and former Illinois Rep. Joe Walsh, not to mention an incumbent Republican with close to 90 percent support within the GOP. A spokesperson for the Trump campaign promptly dismissed the Sanford announcement with a single word: “Irrelevant.”

President Trump reacted to the announcement via Twitter on Monday morning, mocking Sanford over the infamous “Appalachian Trail” incident when, as governor, he was caught having an extramarital affair and labeling his primary opponents “The Three Stooges.”

Meanwhile, South Carolina was one of three states, along with Nevada and Kansas, announcing over the weekend they will not hold a GOP presidential primary. According to SCGOP chairman Drew McKissick, it’s an unnecessary expense.  McKissick says a primary would cost the state’s taxpayers around $1.2 million and it’s unnecessary because there is “no legitimate primary challenger” to the president. Tough words from Sanford’s own state party chairman.

“It goes without saying that I’m disappointed because I believe the contest of ideas to be the very basis of political activity and involvement,” Sanford said.

Walsh’s campaign spokesperson Lucy Caldwell was more blunt: “This is not the kind of thing that is supposed to happen in America. This is the kind of disgusting, terrible behavior that we rail against in countries like North Korea and China, but those are the places that Donald Trump admires, so it’s not surprising that his party is looking to bring those tactics to the U.S.”

There hasn’t been much backlash back in South Carolina, however. “I don’t hear any Republicans here in the Palmetto State saying, ‘Give us an alternative to President Trump,” RJ May III, president of South Carolina-based Ivory Tusk Consulting told NHJournal. “The fact is, President Trump has delivered on his Supreme Court and judicial nominees, on jobs and the economy, and on slashing federal regulations. Republicans here are pleased with that.”

Both Walsh and Weld have aggressively gone after President Trump on issues of character and personal behavior, but Sanford has largely stuck to his message of fiscal responsibility. However, he has commented on what he believes are the impacts of the Trump presidency on America’s civic institutions.

“We need to have a conversation about the degree to which institutions and political culture are being damaged by this president,” Sanford said Sunday. “A tweet may be interesting, it may be newsworthy but it’s not leadership.”

So will Sanford be going on the attack against President Trump?

“I’ll always lead with debt, deficits and spending,” he told NHJournal “But if you go to my website, you can see my concession speech from the 2018 campaign. And back then, I was talking about the importance of our civic institutions and political culture. So really, it’s the same conversation I’ve been having.”

And how does Sanford feel about his chances?

“This is just a first step, but I’ve been encouraged by the emails, phone calls and texts of support I received after my announcement this morning.  I couldn’t keep up with them. I got a call from an American living in London who wanted to know what he could do to help. Still, there’s a long way to go.”

Bill Kristol, the best known of the so-called “Never Trump” Republicans, has been urging members of his party to step up and challenge President Trump in the primary. When NHJournal asked him for his reaction to the news that Sanford had entered the race, he responded: “The more, the merrier.”