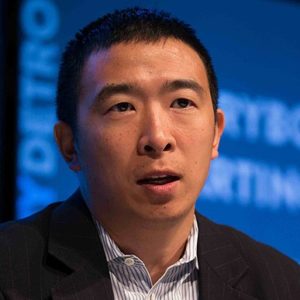 Democratic presidential contender Andrew Yang uttered an inconvenient truth during the recent debate in Detroit. He pointed out, inarguably, that America isn’t the primary source of the carbon dioxide “emissions” we’re told (constantly) are causing the climate to change catastrophically.

Predictably, he was quickly denounced by his own side. Not for “denial,” but defeatism.

“‘We are ten years too late’ is the absolute sh – – – iest climate messaging I could imagine a presidential candidate using,” he wrote.

He prefers the hype.

Which is the basis of the Climate Change Cult’s dogma — which must never be questioned — that the planet is literally within decades of becoming uninhabitable because of a projected 2-3 degree increase in average temperatures, the projected increase based on computer modeling assumptions that have been shown to be as accurate as predictions about peak oil — which was supposed to have peaked in the ’70s and then again in the ’80s … no wait, the ’90s.

And here were are — awash in more oil than was on tap in 1970, when we were supposedly about to run out of it.

Those with memories longer than presidential election cycles may recall a similar serial getting-it-wrong-ism with regard to what the Earth is doing, with our help or otherwise.

First, the Earth was headed for the deep freeze, aka global cooling. Then the crisis pending was thrown into reverse. The globe was warming now. Well, from about 1982 through the late ’90s, which experienced several very hot summers during the latter half of that decade.

But the Earth has recently been cooling again. Drat!

The solution to this embarrassing public relations problem — for those with attention spans longer than that of a goldfish, at any rate — has been to characterize any climate change as pathological.

Even though not abnormal in the long-term scheme of things, let alone provably caused by man. American man.

But it was — and remains — a brilliant rhetorical tactic because it’s impossible to “deny” that that climate does, in fact, change. It would be like “denying” that the sun sets.  But it ought to raise questions — if only because of the oleaginous fluidity of the term.

Science is about defining things, specifically. About data — facts — that can be checked. It isn’t about feelings or politics — or projections based on incomplete/faulty data or assumptions.

At least, shouldn’t be.

Unfortunately — for Americans — it has become so.  Even if it isn’t so. Certainly, the climate changes. It would be absurd to say otherwise. But that doesn’t mean man (much less American man) has changed it — no matter how many believers say so.

And what of those who don’t believe — and back that up with their money? Like real estate developers, for instance — and the banks that finance their developments. These are presumably not stupid people — and whatever pieties they may offer regarding the impending climate catastrophe, they aren’t heading for the hills — figuratively or literally. And neither is their money. Which they are investing at sea level — in beachfront properties, which we are led to believe will soon be washed away by rising sea levels.

If so, the insurance companies will be on the hook for billions. Are they also run by stupid people? If not, the why do they continue to underwrite such ventures?

Why isn’t the federal government building dikes around the federal city? Won’t it be under water within a decade?

It makes no sense.

And — per Yang — what about the Chinese?

Even if we do beeelieve — put your hands on the TV! — in the imminence of a climate catastrophe, that catastrophe is not going to be averted by crippling the American economy while the Chinese economy continues going full throttle.

Which begs the question about the Chinese being stupid — something for which the Chinese aren’t generally known. Surely, they have looked into this catastrophic climate change business — and if they believed in its imminence, isn’t it reasonable to suppose they’d be first in line to impose carbon austerity on themselves?

And yet, they don’t.

So why are we expected to beg for it to be imposed on ourselves?

“The world has a finite amount of carbon it can emit before we set the worst impacts of climate change in motion,” says Gizmodo’s Kahn.

His tone is that of the fanatic.

Everything is presumed a fait accompli — even though the science is far from “settled” as regards the mechanisms driving changes in the climate, how much — or little these changes — may be and what, if anything, Americans can do about it.

Or be punished for doing.

It’s important to bear this in mind. All of the Democrats seeking Trump’s chair next year have “plans” for America that will impose costs on Americans. Higher taxes, more regulations.

Probably, this will cost people their jobs.

Andrew Yang inadvertently conceded these costs will probably accomplish nothing. Which makes one wonder why anyone in their right mind would support paying them.

That isn’t “defeatism.” It’s a breath of sanity in lunatic times. And it probably just cost Yang the nomination.