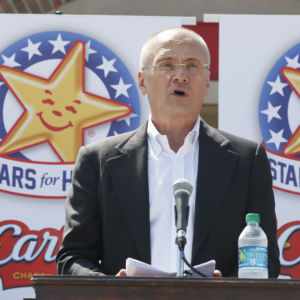 As President-elect Donald Trump rounds out his Cabinet, America’s job creators can expect a brighter future. Andy Puzder, CEO of CKE Restaurants — the parent company of Carl’s Jr. and Hardee’s — will become labor secretary in January.

Puzder’s appointment gives the federal government an experienced job creator who knows what it takes to run a business and hire thousands of employees. Most notably, he understands the importance of America’s franchise system, which has created 733,000 small businesses and supports 21 million direct and indirect jobs — a $2.3 trillion boon to the U.S. economy.

Franchising is popular across industries: The vast majority of hotel owners — with whom I work closely — are franchise owners, which allows them to expand their business and hire more employees in ways that are otherwise very difficult.

Unfortunately, federal regulations threaten this successful franchise model. The General Counsel of the National Labor Relations Board — America’s unelected arbiter of labor law and workplace rules — has issued a recommendation to make franchisors responsible for the employment actions of all franchisees. This leaves local business owners with higher costs while discouraging franchise owners from selling a franchise to an aspiring small business owner — erecting a roadblock before tens of thousands of job creators and millions of employees.

Based on his knowledge of and success with the franchise system, Puzder will work to protect it for all Americans.

Puzder is committed to the principles of economic freedom, while remaining vigilant against poorly designed, job-killing regulations. One such mandate is a $15 an hour minimum wage, which destroys entry-level opportunities for millions of young people. This arbitrary wage often forces small-business owners to either raise prices or cut back on staff — if not both.

In California — which adopted a $15 entry-level wage earlier this year — the new threshold could cost the state almost 700,000 jobs. Likewise in New York, where a recently adopted $15 threshold jeopardizes as many as 588,000 jobs. Applied nationwide, the Heritage Foundation estimated that a $15 entry-level wage would eliminate about 7 million full-time-equivalent positions by 2021.

This leaves America’s cashiers, food servers and hotel workers scrambling for options. That’s why Puzder embraces market-based solutions like the Earned Income Tax Credit, also known as the Working Americans Credit (WAC). Instead of reducing career opportunities, the WAC supplements the income of entry-level employees through the tax code, rewarding work and laying the foundation for upward mobility. It would directly benefit the 550,000 Americans over the age of 25 who earn the entry-level wage rather than putting their jobs on the chopping block.

This enables employees to climb the career ladder and find better-paying positions. According to a recent study from JPMorgan Chase, there are projected to be roughly 2.5 million middle-skill job openings next year, many of which pay annual salaries of $50,000 or more. Puzder realizes that ours should be a Fight for $50,000, not a Fight for $15. In his words, “Those with technical skills make good livings, while those who don’t have those skills are being priced out of entry-level jobs.”

With regulatory reform near the top of President-elect Trump’s agenda, Andy Puzder is the perfect pick to carry it out.

Chip Rogers is the president and CEO of the Asian American Hotel Owners Association and a member of the Job Creators Network.