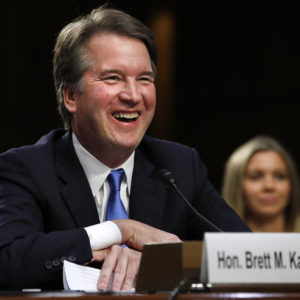 Both Anecdotes and Evidence Point to “Brett Bounce” in the Midterms

At the left-wing website Salon.com, a warning for their readers: “New poll shows Supreme Court fight is motivating Republican voters.”

In purple New Hampshire, Republican state senator Sharon Carson tells Inside Sources about a GOP gathering in Londonderry Tuesday night: “We had a surprisingly large crowd—a lot bigger than I was expecting, and they were all talking about one thing: ‘Kavanaugh.’”

Down in Atlanta, local radio talk host Erick Erickson tells Inside Sources about a rally for GOP gubernatorial candidate Brian Kemp in a small, south Georgia community. The Kemp campaign was expecting around 100 people, and were taken aback when more than 300 folks showed up.  “All they wanted to talk about was how badly Kavanaugh was being treated.  Anecdotes aren’t data, I know, but people are fired up over this in ways nothing else has fired them up,” Erickson said.

Erickson is right: Anecdotes aren’t data–but polls are. And from Quinnipiac to Marist to Fox, polls across the board show a surge in GOP voter enthusiasm and interest as the midterms approach—after months of lagging behind their more-energized Democratic counterparts.

“In our polling since last Thursday, I’m seeing a Kavanaugh effect in our races that is energizing Republicans like nothing I’ve seen this entire cycle,” pollster Chris Wilson of WPA Intelligence said Thursday.

The new NPR Marist poll finds that the 10-point Democratic enthusiasm advantage of July is now down to 2 points—a statistical dead heat.  The Democrats’ “generic ballot” advantage was +12 just three weeks ago. Now it’s down to + 6—within the range Republicans need to have any hope of holding onto the House of Representatives.

Similar generic-ballot numbers in the new Quinnipiac poll released Tuesday. Democrats were up 52-38 percent in mid-September, but now has the margin at 49-42 percent. The margin dropped in half since the Kavanaugh controversy began.

Fox News has a new poll that is more limited in scope but, perhaps, more significant. Fox looked at five battleground U.S. Senate races— Arizona, Indiana, Missouri, North Dakota and Tennessee—and found GOP enthusiasm up in every state.  “The number of Republicans feeling ‘extremely’ interested in the upcoming election is up by 2 points in Arizona, up by 9 points in Indiana, up 8 points in both Missouri and North Dakota, and up 11 points in Tennessee,” Fox News reports.

“In each state, Republicans are now just as likely as Democrats to say they are extremely interested — erasing an edge Democrats had in several states last month.”

In Missouri, Sen. Claire McCaskill has been showing a remarkable resilience in a state Donald Trump carried by 20 points and whose voters overwhelmingly support Judge Kavanaugh’s confirmation. The incumbent Democrat came out against Kavanaugh early—before the sex assault allegations became public—and yet has maintained a narrow lead.

But now Axios reports that the GOP super PAC Missouri Rising Action just got numbers back yesterday showing Republican Josh Hawley with a 52-44 lead—a huge swing from the 46-42 McCaskill lead the same poll found in June.

This is all good news for Republican campaigns who’ve struggled to find ways to match the passion across the aisle. As Democratic whip Steny Hoyer (D-MD) told reporters yesterday: “The women of America are very energized — and they started to be energized on the 21st of January 2017. It has not dissipated.  And while I believe there’s some energy on the other side as well, I don’t think it matches the energy that was created on our side, which was already at a high level.”

Erickson agrees: “One of the unintended consequences of the Kavanaugh story is that it’s helping solve the problem Republicans were having with their base. Republican voters simply didn’t believe the media reports about the bad polling, and they weren’t motivated to show up, knock on doors, etc.”

“Now these voters suddenly find themselves back on the front lines of the culture war, and they are ready to march,” Erickson said.