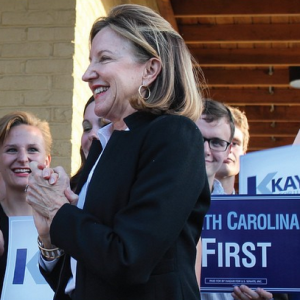 Another Conflict of Interest for Hagan

Sen. Kay Hagan is facing new questions over whether she personally profited from her support for legislation. According to an analysis conducted by InsideSources, Hagan would benefit financially from legislation that she has made central to her reelection campaign, support for Export-Import Bank reauthorization.

In late September, Politico reported that her family benefited from one of her first votes in the Senate—Barack Obama’s 2009 stimulus package—when JDC Manufacturing, a company co-owned by Hagan’s husband, Chip, received $390,000 in federal grants, $250,000 coming from the stimulus.

Hagan, who is currently locked in a close fight in North Carolina, has campaigned on reauthorization of the Export-Import Bank. She held a campaign kickoff event earlier this year at a company that benefits from the bank’s assistance, and she has attacked her opponent, Tom Tillis, for opposing the bank’s reauthorization.

Hagan has reported in her personal financial disclosures that her husband owns between $100,000 and $250,000 of stock in Mother Murphy’s Laboratories, a flavoring manufacturer based in Greensboro.

Further, according to the company’s annual reports, Chip Hagan has served as Assistant Secretary for the company’s board since 2007. The financial disclosure reports show that Chip Hagan has been receiving income from the company, as well. This has risen substantially since Sen. Hagan first took office in 2009. In 2010, her husband’s income increased by nearly $29,000 at Mother Murphy’s. The most recent report, from last year, shows that Chip Hagan maintains his equity stake in the company and received $27,555 in compensation.

For every year since 2010, Mother Murphy’s has been awarded $300,000 in loans from the Export-Import Bank. As of earlier this year, the company has received a total of $1.5 million in Export-Import Bank loans.

Sen. Hagan’s campaign did not respond to a request for comment on whether it was appropriate for her to vote on reauthorization of the Export-Import Bank when her family stood to profit from shares in the company.

When Hagan’s campaign was asked by Politico about the Senator’s support for the 2009 stimulus, it stated that Hagan had consulted with a respected ethics lawyer and was cleared to vote on the legislation. The Senate allows members to vote on legislation that will personally benefit them as long as the bill is broadly targeted to benefit a wider class of investors. A vote for the Export-Import Bank would fall under similar rules.

Still, Hagan’s actions raise questions in the midst of a close race. It is one more instance of conflict where Hagan has voted in her own interest.