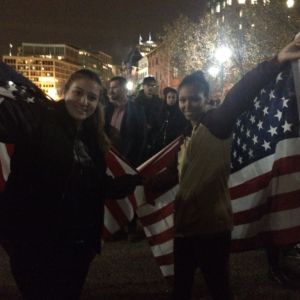 Trump was able to win the election with at least 276 electoral votes by the end of the night. Democratic rival Hillary Clinton, in contrast, was only able to achieve 218 votes. Several states remain too close to call.

Many in the crowd expressed disbelief as Trump pulled ahead before eventually securing victory. 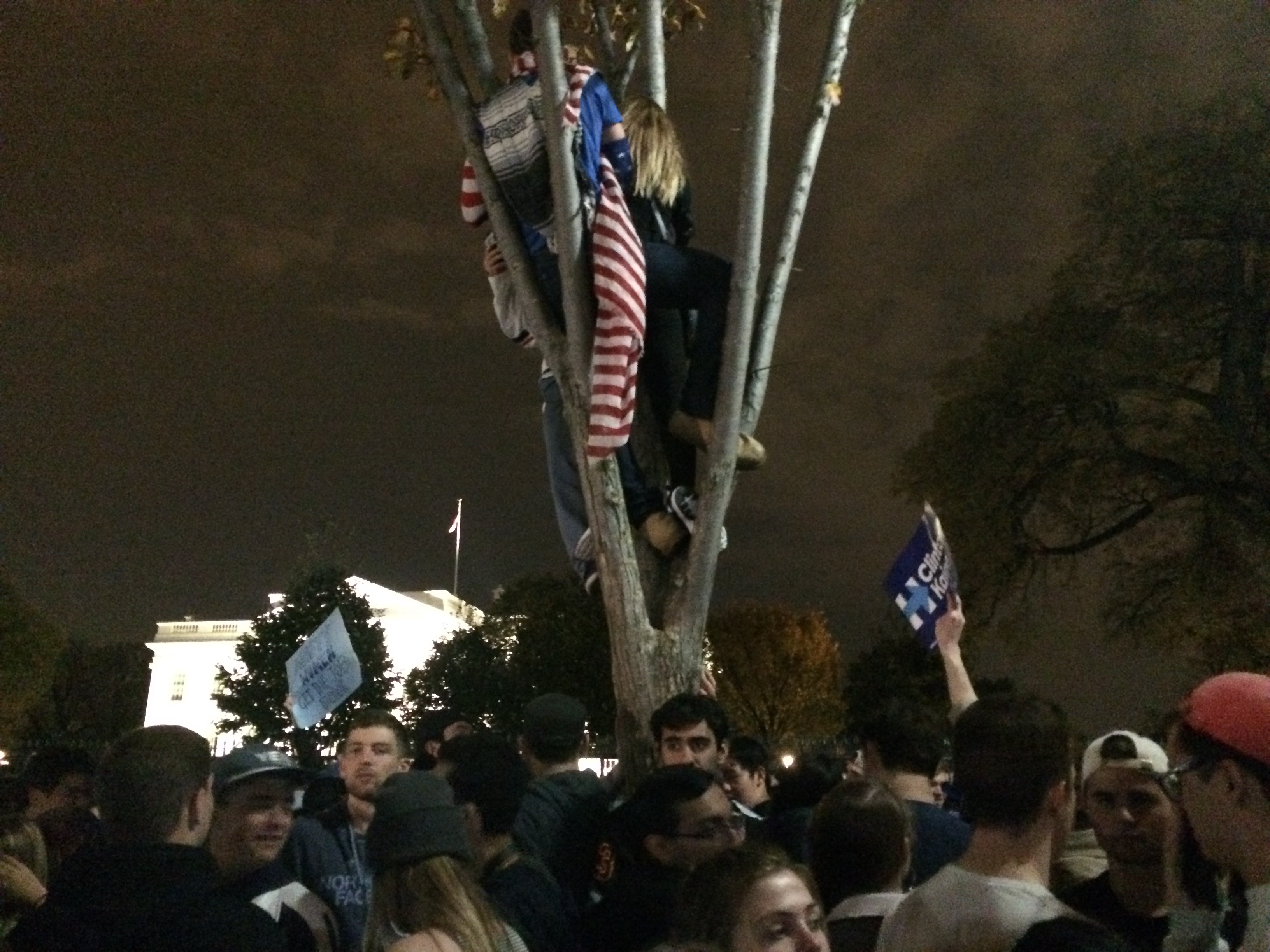 “I feel sorry for the country and I feel sorry for a lot of people,” Najai Warren told InsideSources from the crowd. “I don’t see how you vote for someone who has no respect for women, other religions, other races or says what he wants without holding his tongue at all. I don’t see how that’s fit for the president.”

The crowd gathered early expecting to celebrate a Clinton victory. Their excitement would soon turn to angry chants against the president-elect. 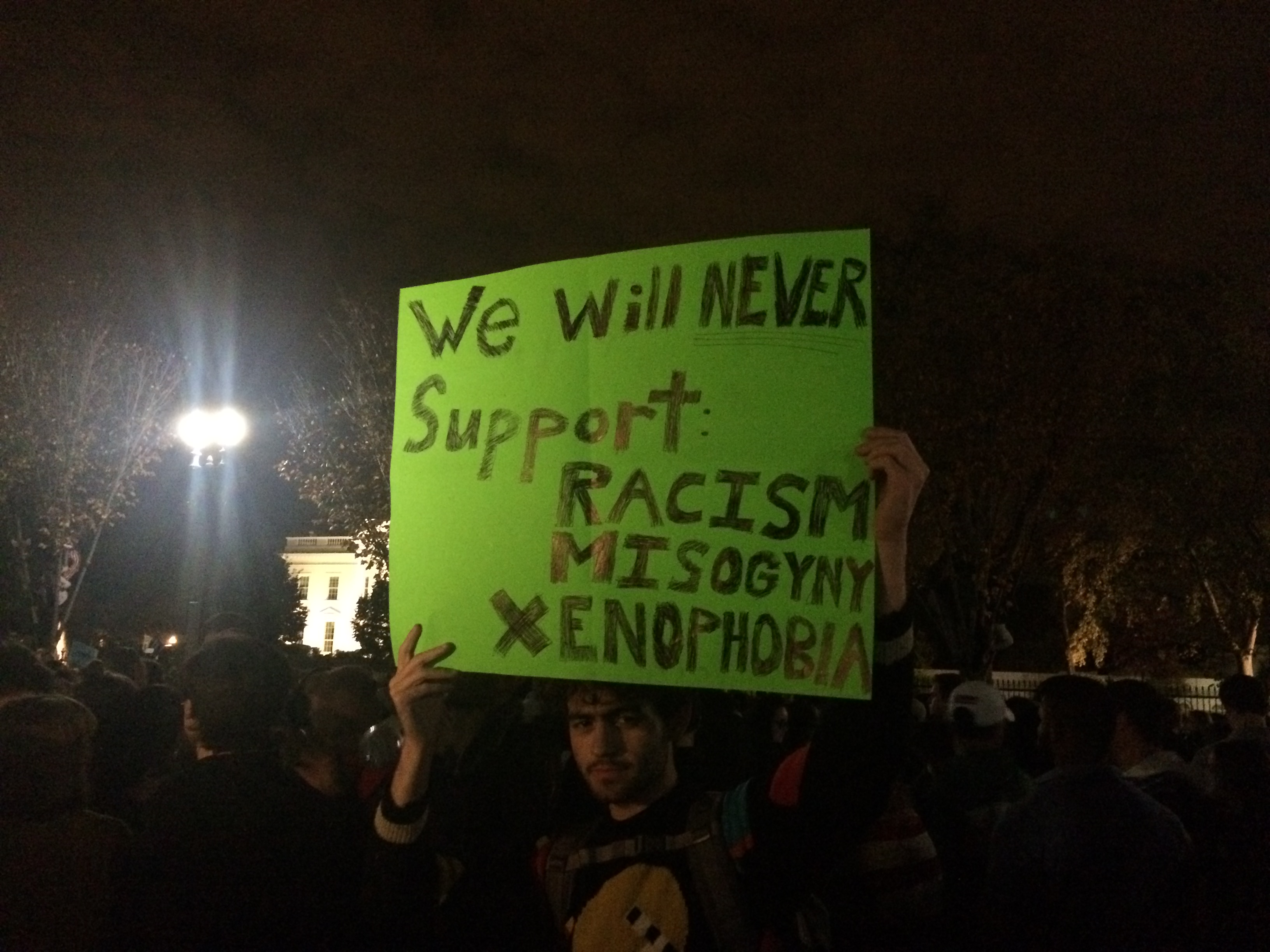 “That man is a fascist,” George Washington University student Andrew Myslik told InsideSources. “He has no authority in this country. He does not represent what we believe. I just hope the foreign news outlets understand this man does not represent the majority of our country.” 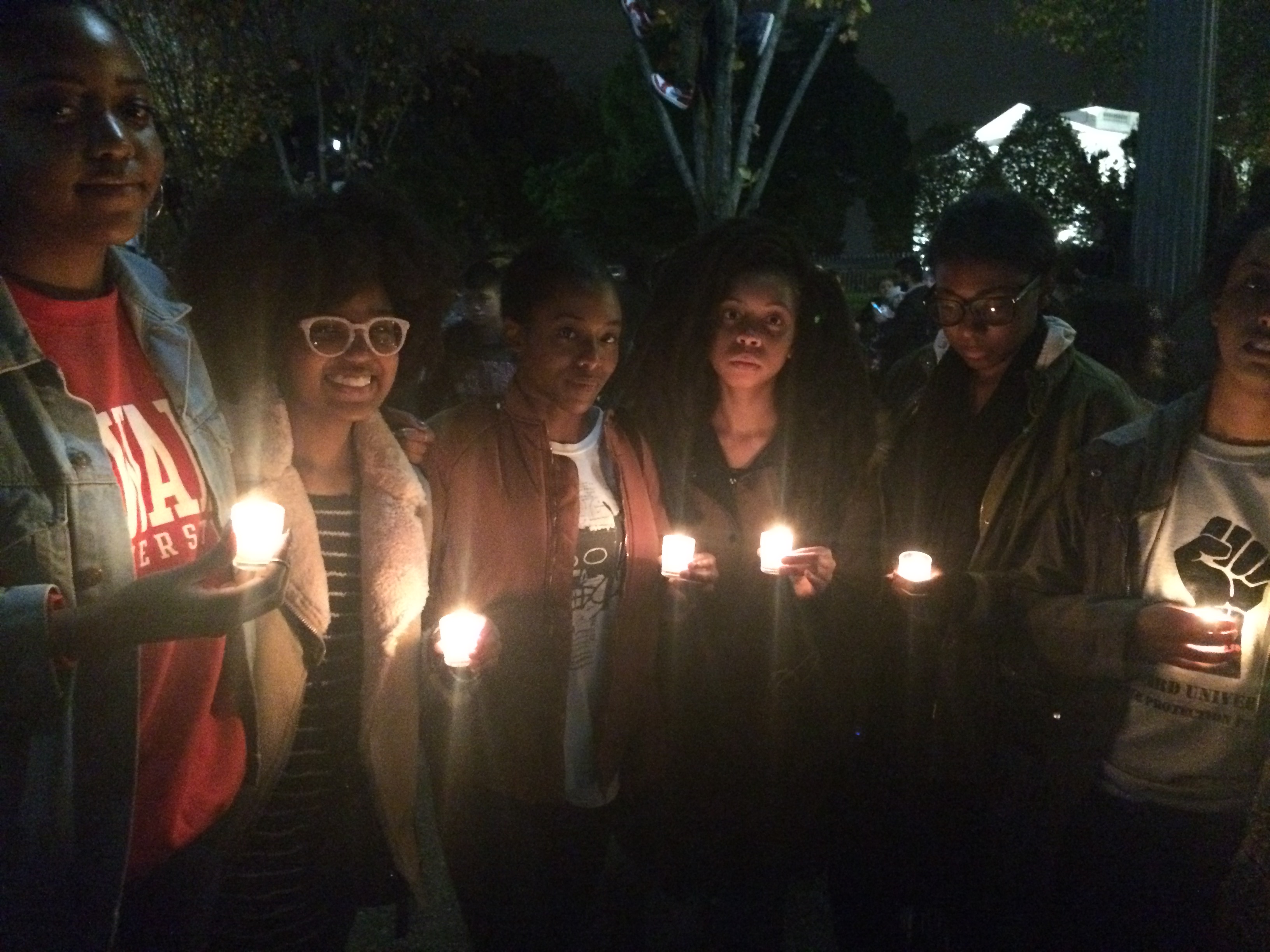 “It’s a complete surprise to me,” a protester who identified herself simply as Leela told InsideSources. “We’ve had Obama’s presidency for the past eight years. We’ve been so lucky and blessed with a leader who’s so even minded and so sound and used to speaking to all Americans and we have a man who is potentially speaking to one subset of the American people and it’s rather disappointing.” 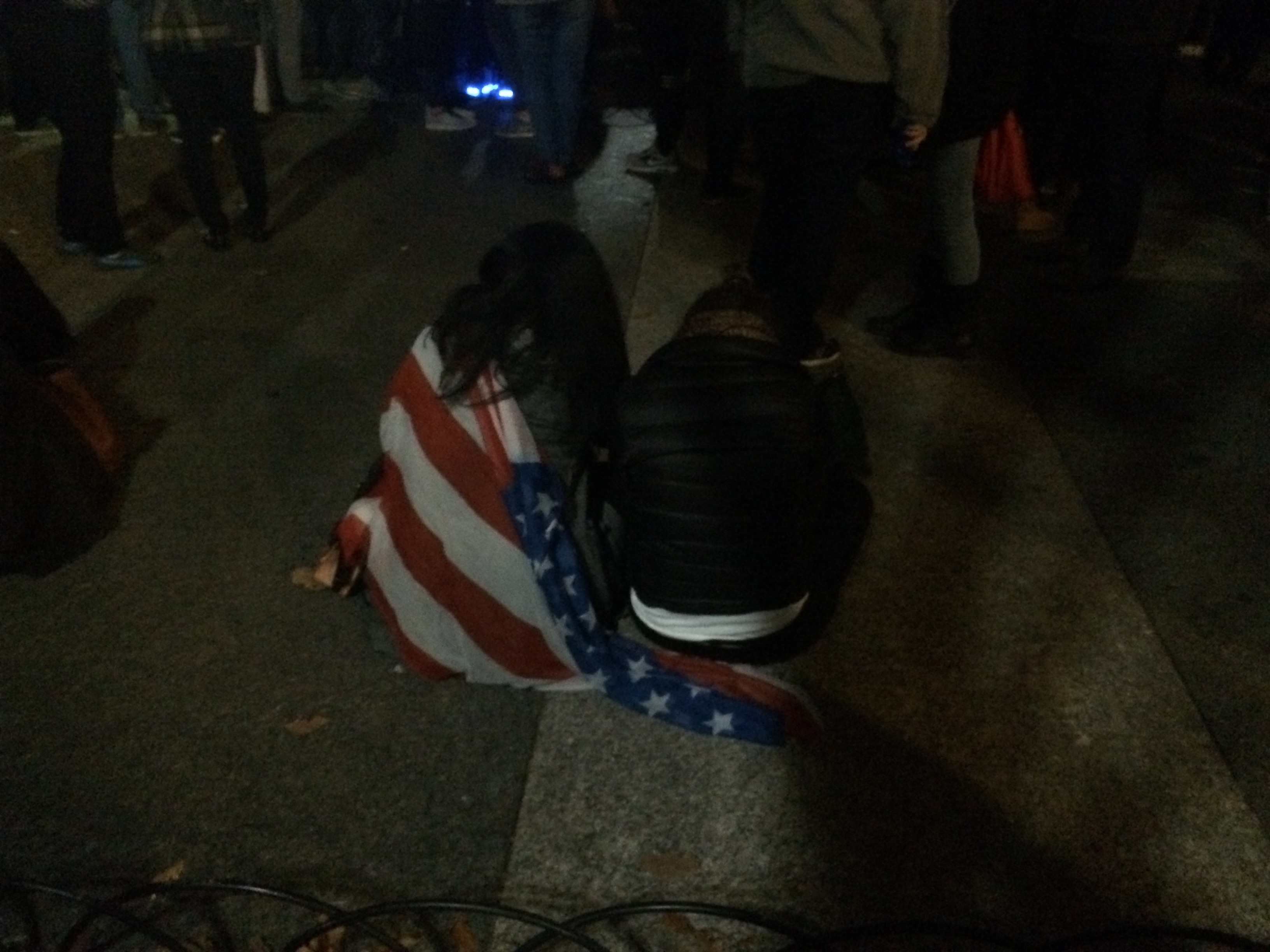 Only a few people in the crowd outwardly expressed support for the president-elect. Julie Strong noted that she doesn’t care for either candidate but was outright opposed to Clinton over allegations she violated the law without punishment. Clinton has been embroiled in several scandals throughout her campaign.

“I want Hillary to be accountable for the actions she has taken against the American people,” Strong told InsideSources. “I want justice to be served in the United States, and I will not sit back and watch what is happening with our judicial system in this instance. I don’t know why she is above the law.”

Clinton has faced allegations that she improperly stored classified information on a private email server. Many conservatives have also criticized her conduct during a terrorist attack in Benghazi, Libya when four Americans were killed. Strong argues her conduct deserves prosecution. 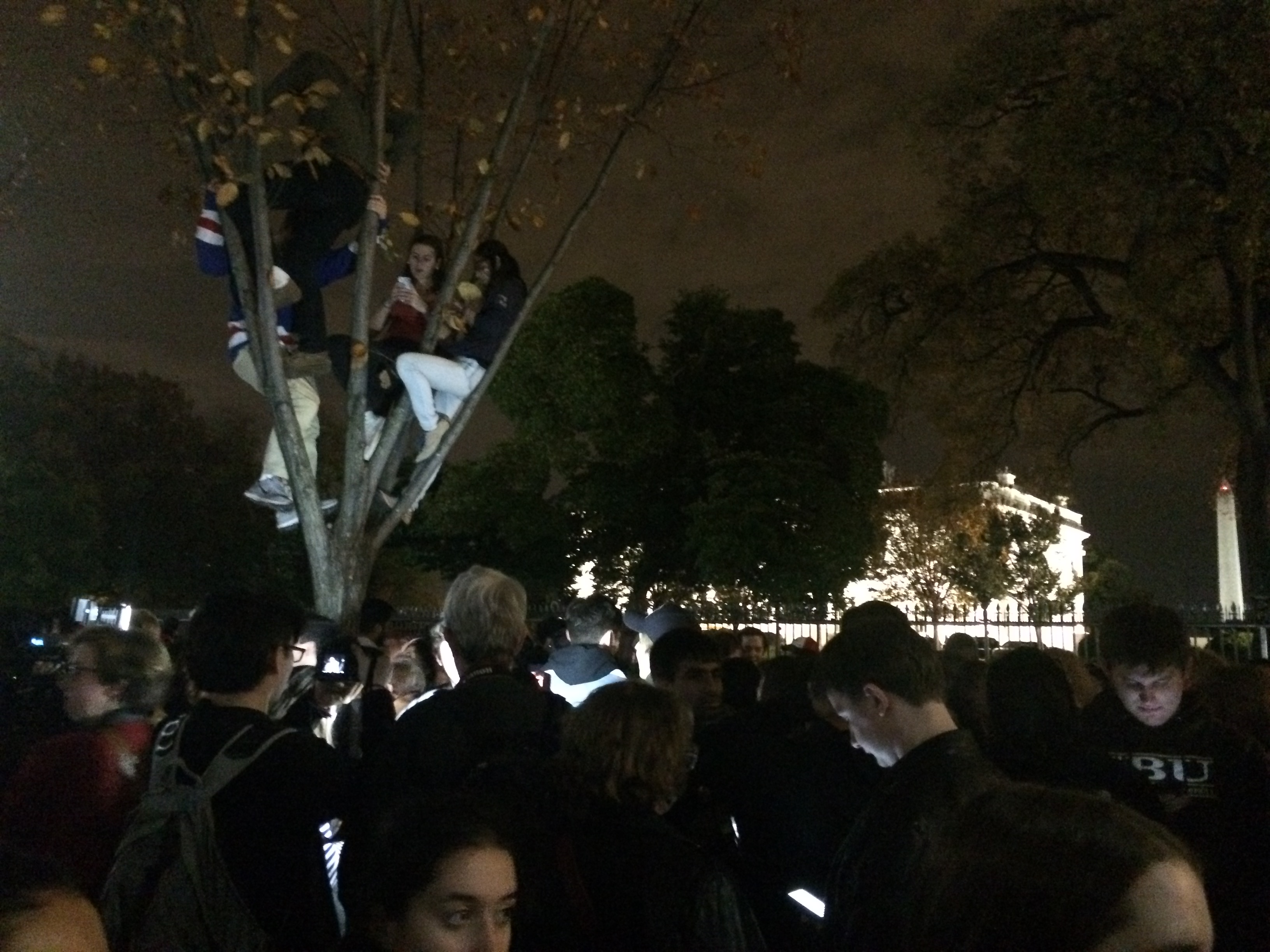 Daniel Vitagliano came out to support Libertarian candidate Gary Johnson. He admits that he didn’t expect Johnson to win but was still surprised with how the election turned out. Vitagliano notes that he thought Clinton would win over Trump.

“I’m surprised Gary Johnson didn’t get the five percent, I’m surprised Trump won,” Vitagliano told InsideSources. “I think everyone is surprised. I think the problem is maybe, a lot of Trump supporters have a lot of hate maybe. They have a lot of drive to go vote.”

Vitagliano describes himself as an American who advocates for libertarianism in Denmark. He notes that Clinton likely had more supporters based on polling before the election. Nevertheless, Vitagliano believes that support didn’t translate to enough people actually going out to vote for her. 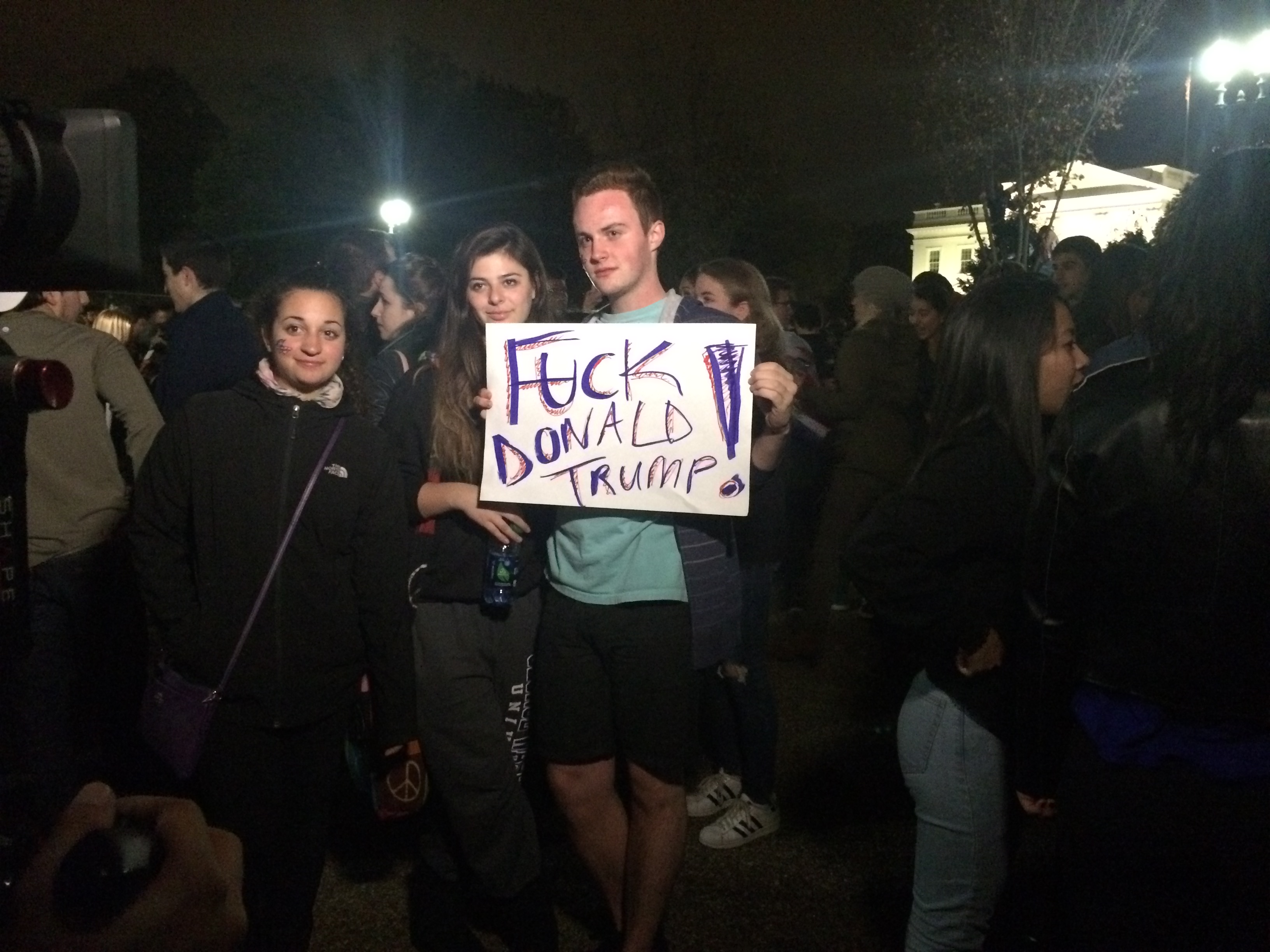 Trump will remain the president-elect until January 20, 2017, when he will be officially sworn in. He will be replacing Democratic President Barack Obama who served for the last eight years. Trump has promised to overturn several of his key policy achievements including the Affordable Care Act.