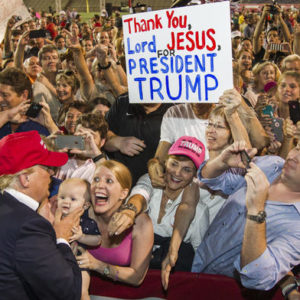 When the anti-Trump Republicans of the Lincoln Project crafted their first digital ad, they didn’t go after college-educated East Coast urbanites or suburban soccer moms.  Instead, they targeted some of the most passionate and some say, inexplicable of the president’s supporters:

Since Trump first burst on the political scene, he’s enjoyed strong support from white evangelicals, winning 81 percent of their vote in 2016 according to exit polling. Their devotion to a thrice-married Manhattan adulterer who’s bragged about his mistreatment of women strikes some political observers as a mystery. But these #NeverTrumpers see an opportunity.

The Lincoln Project, whose members include political pros like Steve Schmidt, John Weaver and Rick Wilson, makes no secret of its objective: Defeating Donald Trump. And they’re more than willing to elect a Democrat to do it. They believe if they can peel away just a few percentage points of his evangelical base in 2020, they could deny Trump another four years in the White House.

“Donald Trump is a clear and present danger to our country. If it means electing a Democrat to end that danger, so be it,” former New Hampshire state GOP chairman Jennifer Horn told InsideSources.  Like her fellow Lincoln Project members, Horn is an experienced political operative who’s worked on multiple campaigns and even run for Congress herself. The decision to make their first major pitch to evangelicals, as opposed to rank-and-file GOP regulars, reflects their politically-strategic approach.

The digital ad, entitled “The MAGA Church,” highlights unflattering moments from leading evangelicals like Robert Jeffress and Jim Bakker, interspersed with some of Trump’s most profane public utterances. It concludes with the message, “If this is the best American Christians can do, then God help us all.”

The ad offers an extremely unflattering portrayal of evangelical leaders and their fawning support of President Trump, so much so that one commenter responded to the ad by saying “Honestly, those evangelicals bother me more than Trump does.” Is attacking Christian support for Trump really going to change their minds?

“We’re not going after people of faith,” the Lincoln Project’s Ron Steslow told InsideSources. “This ad isn’t about faithful Christians. It’s about the charlatans who are exploiting the trust of their flocks for political power, money, and fame. The Jesus I grew up with would be horrified at what these leaders are saying and doing in his name.”

Steslow concedes that white evangelicals are still among Trump’s biggest backers, but he says that support is softening. In a new Marist/NPR poll released this week, Trump’s support among evangelicals is at 68 percent–higher than his 41 percent approval rating among voters overall, but well below his 89 percent GOP approval rating. It’s also noticeably lower than the 75 percent support Trump enjoyed from evangelicals last April. Perhaps most significant, Trump’s disapproval among these voters has risen to 26 percent.

“Evangelicals are not a monolith,” Steslow says. “Many of them don’t like the purely transactional relationship their leaders have with Trump. Many Christians believe that character should still count — and those poll numbers show they’re recognizing the fruit of their bargain with Trump’s GOP is rotten.”

That was the message of a controversial editorial by the prominent evangelical magazine Christianity Today calling for Trump to be removed from office.

“To the many evangelicals who continue to support Mr. Trump in spite of his blackened moral record, we might say this: Remember who you are and whom you serve. Consider how your justification of Mr. Trump influences your witness to your Lord and Savior,” Mark Galli, the magazine’s editor-in-chief wrote. “If we don’t reverse course now, will anyone take anything we say about justice and righteousness with any seriousness for decades to come?”

Politics, however, isn’t about righteousness. It’s about ballots. Can the Lincoln Project convince enough right-leaning evangelicals to abandon Trump to impact the 2020 elections? Many political pros are dubious.

“As an activist or donor, aligning yourself with a Never Trumper super PAC is a recipe for oblivion,” GOP donor and Trump supporter Dan Eberhart told the Washington Post. “All the action is inside the tent in the Republican Party right now, and you see that in the House and the Senate not breaking on impeachment, you see that in Trump having an extremely high rating within the party, and you see that within the current level of donors. The donors are with Trump; the base is with Trump.”

The latest PRRI poll of evangelical Christians released in early January appears to back up that analysis.

The challenge for Trump, and the potential opportunity for the Lincoln Project, lies in the fact that Trump’s overall approval remains closer to 40 percent than 50, and he’s underwater with independent voters. As a result, many political pros believe Trump’s going to need even more support, not less, from his white, evangelical base to win in 2020.

Could efforts like the Lincoln Project’s keep those numbers down?

“Even President Trump’s buddy Steve Bannon knows how precarious the president’s position is,” Horn said. “He said if the Lincoln Project peels away 3 or 4 percent of Trump’s support, the president is in trouble. Then look at new polls showing 20 percent of Republicans overall believe Trump should be removed from office. Bannon is right – the President is in trouble.”