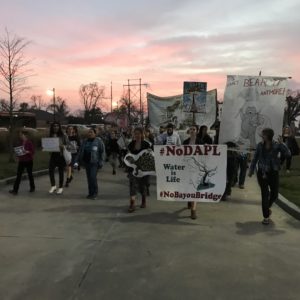 Protesters sing "You Are My Sunshine" while marching into public hearing on the Bayou Bridge pipeline in Napoleonville, La.
News

Over time, pipeline protests have faded from the headlines. However, the Trump’s administration’s support for infrastructure construction has not been enough to do away with them altogether. Work on the Bayou Bridge pipeline in Louisiana was halted by court order February 23. A District Court ruling found that the Army Corps of Engineers did not properly consider the impacts of construction in the Atchafalaya Basin and issued a stop work order. An appeal of that stop work order will be heard by the 5th Circuit Court of Appeals on Tuesday.

Last week, U.S. District Judge Shelly Dick issued a clarification of an earlier stop work order. Under the terms of the order, construction must stop within the Atchafalaya Basin, though work may continue along other sections of the 163-mile crude oil line. The stop work order was praised by the continuing protest movement, which has focused on shutting down construction of the Bayou Bridge and sought to redirect some of the energy of the failed Dakota Access Pipeline protests towards Louisiana.

“The court’s ruling recognizes the serious threat this pipeline poses to the Atchafalaya Basin, one of our country’s ecological and cultural crown jewels,” said Jan Hasselman, attorney from Earthjustice, which represented the environmental groups in court. “For now, at least, the Atchafalaya is safe from this company’s incompetence and greed.”

Others disagreed, worried that the judge’s rulings runs counter to existing regulations and case law.

“Judge Shelly Dick has adopted an aggressive reading of the phrase ‘arbitrary and capricious’ that arrogates unto the courts the power to decide which pipelines should be completed and which should be forced to remain in limbo long after construction has begun,” said Richard A. Epstein, a professor at New York University School of Law and a legal adviser to the Grow America’s Infrastructure Now coalition. “By judicial fiat, arbitrary and capricious has become a form of strict scrutiny never contemplated under [the National Environmental Policy Act] and the Administrative Procedure Act.”

Protesters in Louisiana have already been arrested for trespassing on the construction site and disrupting construction work. This came as part of a week of protest actions by environmental groups for February 26-March 4. A schedule of events shows that protests targeted Morgan Stanley, US Bank, Wells Fargo, Citibank, and UBS for providing financial backing for energy infrastructure construction. Protesters also planned to protest Army Corps of Engineers offices out of dissatisfaction with the permits that the Corps issued.

The stop work order marks one of the first wins for a protest movement that has largely failed to garner the media attention of the NoDAPL camps. Although protesters sought to influence permitting decisions by a variety of groups, they were in the end unsuccessful. Similarly, because of the topography of the bayous, creating a large-scale protest camp like the one at Standing Rock was impossible.

Although a protest camp, L’eau Est La Vie (Water Is Life), has been formed, its location is kept secret and people interested in joining the camp must first fill out a questionnaire listing their relevant skills, interests, and protest experience.

In part this demonstrates that while the spirit of Standing Rock continues, the form of protest has changed. Protest efforts in the state have taken a variety of different forms. Activist Jane Kleeb, who first joined the environmentalism movement trying to halt the Keystone XL pipeline in Nebraska, founded a series of organizations under the heading of the Bold Alliance. Bold Louisiana focused its efforts around stopping the Bayou Bridge pipeline. However, on February 1st, Mark Hefflinger, the Bold Alliance’s communications director, announced that the group was no longer active as Bold Louisiana. This announcement came alongside similar posts on sites for state affiliates in Iowa and Oklahoma. Instead, the alliance seems to be focusing its efforts on issues in Nebraska and Appalachia.

Energy Transfer Partners has been fighting the stop work order in court, saying that the order is costing them $1 million per day. In a statement, the company said that it “respectfully disagrees” with the court ruling and intended to seek immediate relief in court and stressed that the Army Corps of Engineers had already issued two comprehensive environmental impact reports during the review process. The company also stressed that construction continues along other portions of the pipeline route.