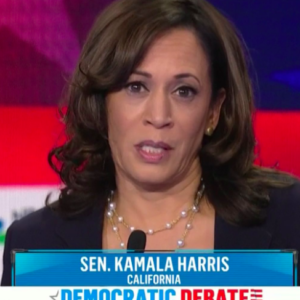 Are 2020 Democrats Throwing Themselves Under the Bus?

“Does anybody think it’s a good idea to put a kid on a bus, travel an hour to another school and to another neighborhood that he or she doesn’t know?”

That was Sen. Bernie Sanders during an interview with ABC’s George Stephanopoulos on Sunday. And the answer to his rhetorical question is clearly, “Yes!”

Sen. Kamala Harris (D-Calif.) has broken out of the 2020 pack thanks to her attack on Biden’s record on busing back in the 1970s, connecting it to what she believes are his problematic comments about working in the U.S. Senate with avowed segregationists in the 1970s.

“I do not believe you are a racist,” Harris began, before telling Biden “it was hurtful to hear you talk about the reputations of two United States senators who built their reputations and career on segregation … And it was not only that, but you also worked with them to oppose busing.

“And you know, there was a little girl in California who was part of the second class to integrate her public schools and she was bused to school every day and that little girl was me.”

According to a Morning Consult/FiveThirtyEight poll released the next day, Biden’s support dropped 10 points after the debate (41 down to 31 percent) while Harris’s number jumped by almost nine.

Scott Rasmussen found a similar, if smaller, trend in his polling from the post-debate weekend, with Biden down a point at 28 percent and Kamala Harris up five points to 11 percent.

And a CNN poll released Monday afternoon found similar results: a 10-point decline in support for Biden since the last CNN poll in May, but a 9-point pick-up for Harris and an 8-point increase for Warren.

It appears that backing federal busing mandates is a political win, at least in the short term. But is it a smart strategy to take the White House?

Many of the Democratic 2020 contenders apparently think so.  Sen. Kirsten Gillibrand D-N.Y.) has announced her support, along with Sen. Cory Booker (D-N.J.).

Former HUD Secretary Julian Castro criticized Biden for a policy “that allowed local communities to make a decision” on whether to bus their children. Sen. Elizabeth Warren (D-Mass.) said on Saturday “I’m already on the record on busing and using busing as a way to help communities that are diversified,” pointing to legislation she co-sponsored that would increase funding for busing.

Another co-sponsor of that busing bill? Bernie Sanders.

Despite his suggestion that nobody thinks forced busing is a good idea, the Vermont socialist includes it in his education policy proposal, which he calls “A Thurgood Marshall Plan for Public Education.” It includes “fund[ing] school transportation to help integration, ending the absurd prohibitions in place.”

A 1970 Gallup poll found that 86 percent of Americans opposing busing children from one school district to another. Two years later another Gallup poll found nearly 70 percent still opposed it.  Even at the height of the desegregation debate, more black voters opposed busing than supported it.

In 1999, the most recent Gallup poll on the topic, Americans preferred “letting students go to the local school in their community, even if it means that most of the students would be the same race” over “transferring students to other schools to create more integration” by an 82-15 percent margin.

And while it doesn’t specifically ask about busing, a May 2019 Pew Research poll found Americans supported students attending local schools over sending them to different communities to achieve racial diversity by 54-42 percent. 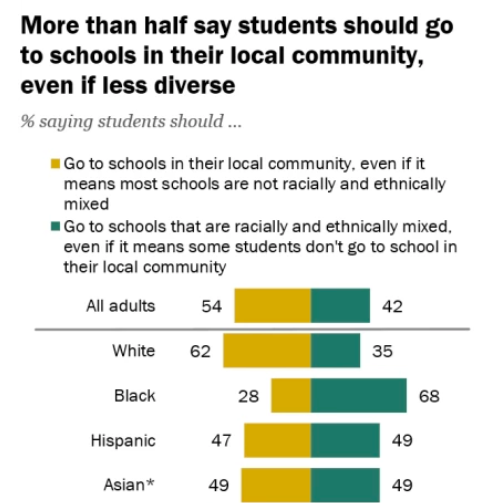 More significantly for Democrats trying to attract white, working-class voters in the general election, white voters prioritized local schools over desegregation by 62-35 percent, with Asian and Hispanic voters equally split. The only demographic that chooses integration over community schools is black voters (68 to 28 percent) and they already vote overwhelmingly Democratic.

“The Democrats are running a campaign that looks very appealing to California voters and very unappealing to Midwestern voters,” Rasmussen told InsideSources.

He also reports in his weekend polling that while Biden fell to 25 percent in the Friday-Saturday polling when the first wave of the busing debate was hitting, “he bounced back on the next polling day.” This could be a sign that the first impression of the issue isn’t the lasting one.

Veteran Democratic strategist Bob Shrum, director of the University of Southern California’s Center for the Political Future told InsideSources he isn’t concerned about the busing issue impacting the 2020 general election.

“I don’t think voters care about busing. That’s more us [pundits and the press] than the voters,” Shrum said. “The real issue wasn’t busing, it was Biden’s performance.”

Shrum dismisses talk that Biden is fatally wounded, but he does agree that his encounter with Harris was a setback.

“In the second debate, he can’t possibly afford the same kind of performance, because he’ll start bleeding support and voters will go shopping for other people,” Shrum said.  “He’s either got to prepare better and differently — or he’s just got to prepare for the next debate.”

“Forced busing was highly controversial and deeply problematic, and didn’t exactly sweep the nation as the best way to integrate public schools,” Dolan told InsideSources. “We badly need a debate on how to make sure all children receive a quality public education, but raising the issue of a decades’ old position on forced busing isn’t the way to start it.”