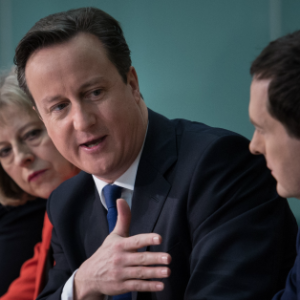 For years now, several prominent conservative commentators have been hailing British Prime Minister David Cameron as a leader the Republican Party should emulate.

New York Times columnist David Brooks and Atlantic editor David Frum have been among the most vocal, saying Cameron’s more communitarian brand of a right-of-center politics offers valuable lessons for the GOP, which has struggled to broaden its appeal in the era of President Barack Obama.

Both writers reiterated these arguments following the Prime Minister’s stunning victory in the U.K. general election last month, with Frum identifying key factors that he thinks have helped conservatives succeed in a variety of countries around the world. These include accepting gay rights, declining to “police women’s sexual behavior or to impose restrictions on women’s reproductive choices” and embracing the basic idea of universal healthcare:

Center-right parties in Australia, Canada, New Zealand, and the United Kingdom have all made peace with government guarantees of healthcare for all. These conservatives do not abjectly defend the healthcare status quo; they attempt to open more space for competition and private initiative within the health sector. But they accept that universal health coverage in some form has joined old-age pensions and unemployment insurance in the armature of an advanced modern economy.

“I would say, if American conservatives want to know how to compete in blue America, look at what David Cameron is doing,” he said.

But is the U.K. a realistic model for Republicans? Many conservative scholars have mixed feelings.

Since Cameron’s victory, two prominent right-of-center think tanks in Washington have held panel discussions assessing the Prime Minister’s performance in office. They highlighted economic accomplishments that many in the GOP would cheer — spending cuts, deficit reduction measures, changes to the welfare system — but they also raised concerns about Britain’s approach to government regulation and civil liberties, which likely would upset the increasingly libertarian Republican base.

Speaking at a Heritage Foundation panel on May 28, Ryan Bourne of the London-based Institute of Economic Affairs said the recent U.K. election was “undoubtedly a victory for economic freedom.”

But panelists at the libertarian Cato Institute on May 20 were troubled by much of Cameron’s record. Iain Murray of the Competitive Enterprise Institute said government intervention is “alive and well” in the U.K., recalling that the Conservative political manifesto promised British citizens “a plan for every stage of your life.” It’s a far cry from the “leave us alone” rhetoric that’s so common on the American right.

In terms of regulation, Murray said U.K. Conservatives are instituting “two new financial regulators — a financial policy committee and a financial conduct authority, which is a bit like a British version of the Consumer Financial Protection Bureau.”

He added that Cameron’s party is “imposing a version of the Glass–Steagall law that was repealed in the 1990s here, which separates investment banking operations from retail banking operations. They’re restricting bankers’ bonuses and interfering with executive compensation arrangements.”

While potentially appealing to American liberals, policies like these would be anathema to most U.S. conservatives, and Cameron’s record is even more disturbing to libertarians, according to Cato’s Tom Clougherty. His many concerns include Britain’s anti-extremism policies, which can grant police authority to limit “harmful activities” citizens many undertake.

All of this, combined with Cameron’s latest push for broader government surveillance powers, may make the Prime Minister an unlikely model for Republicans, at least in the near term. It’s difficult to imagine supporters of presidential candidates like Rand Paul and Ted Cruz getting behind much of what Cameron advocates, and his policies even seem like a bridge too far for relatively moderate candidates like Jeb Bush. Part of this is that American politics is just vastly more conservative than British politics as a whole.

“David Cameron came out in favor of gay marriage before Barack Obama did,” University of Chicago professor Richard Thaler said at the Washington, D.C., bookstore Politics and Prose on May 21. (Thaler has advised both the Cameron government and the Obama administration.) “It’s not clear that the right-wing party in the U.K. is much to the right of centrist Democrats. I think [Cameron is] to the right of Elizabeth Warren, but probably not to the right of Hillary Clinton.”

That might explain why Bourne of the Institute of Economic Affairs said he didn’t think there were many transferable lessons for the GOP to learn from Cameron. At the May 28 Heritage event, he joked, “If I were to give the Republicans one piece of advice for how to win an election, it’s to have a Democrat candidate as incompetent as [former Labour leader] Ed Miliband.”

Heritage’s Nile Gardiner recounted how the British press had savaged Miliband for his awkwardness and strange appearance during the campaign, even comparing him to the character Wallace from the animated series Wallace and Gromit. Several of the Heritage panelists noted that Republicans are unlikely to face a Democratic candidate with those kind of weakness at any point in the near future.