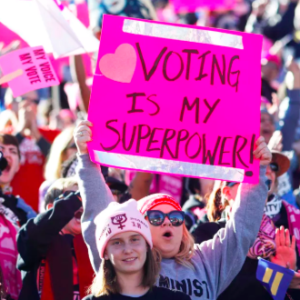 Are Democrats Overplaying the “Woman” Card?

Is it true that New Hampshire “needs a woman governor?”

So says Democrat Molly Kelly when she’s out on the campaign stump. Kelly, who’s running against incumbent Republican (and male) Gov. Chris Sununu isn’t shy about making a direct appeal for gender-based voting.  While she has yet to go as far as former Secretary of State Madeline Albright–who famously claimed that “there’s a special place in hell for women who don’t help each other”–Kelly has repeatedly stated explicitly that the fact that she is a woman is a legitimate reason for women to trust her with their votes.

“Women know how critical this election is and as governor I will continue to stand with women every single day,” Kelly said while campaigning with Sen. Kirsten Gillibrand (D-NY) in Concord, NH.

Sen. Gillibrand agrees. “This country would look different if more women held office,” she tweeted. “That’s why I’m going to NH to campaign with Molly Kelly, who will fight for our families and our futures.”

“They don’t mean that,” Penny Nance tells InsideSources. “Democrats don’t really mean the future is female, they mean that they’re marketing their party to certain, liberal women and ignoring the rest of us.” Nance is CEO of the conservative organization Concerned Women for America. And her reaction to the claim that New Hampshire—or any other state—“needs a woman governor?”

“Just because you’re a woman candidate doesn’t make you a better leader.  As the head of the largest public policy women’s organization in America, I wish I could say that being a woman makes us morally superior to men. We’re not. Everybody is broken, which is why conservative women aren’t looking for the best female candidate. We’re looking for the best candidate—period.”

Voters who are looking for women candidates have plenty of options. More than 400 women ran for Congress this year—twice as many as last year. And they are overwhelmingly Democrats.  A whopping 43 percent of Democrats running for Congress this cycle are women. If you exclude incumbents, it’s 50 percent.

In contrast, just 22 percent of GOP candidates for US Senate are women. At the House level, it’s a mere 13 percent.

This is in part because Republicans tend to reject identity politics. A Pew Research Center poll found that just 33 percent of Republicans believe that there are “too few women in high political offices,” while nearly 80 percent of Democrats feel that way. And as a result, Democrats argue, Democrats are better at handling so-called “women’s issues” like abortion and paid family medical leave.

RNC Chairwoman Ronna McDaniel disagrees: “Democrats and many in the media consistently try to pigeon hole women voters, but we are smart. If a candidate is going to get our vote we need to have more in common than gender,” McDaniel said in a statement to InsideSources.  Women care about the economy, our military, national defense and healthcare. The number one thing we should be looking at in terms of any candidate – male or female – is ‘how are they going to govern? Will their positions on issues help make our lives better?”

And Brett Loyd, President of the Polling Company, questions how effective this over-the-top strategy targeting women is likely to be. “If this strategy worked, then ‘I’m With Her’ would have beaten ‘Make America Great Again,” he told InsideSources.com.

Kimberly Jenkins of Moms for America says that the argument that America needs more woman politicians because women are better people than men is “ridiculous” and points to their behavior during the debate over the nomination of Judge Brett Kavanaugh to the Supreme Court.

“I just spent about 14 days in Washington, DC watching women behave in the most vile, despicable way I have ever seen,” Jenkins told InsideSources. “Meanwhile the men that behaved with complete integrity while they were being attacked and accosted by these women.  Some of them were scratching their nails on doors, literally going up and down elevators and stalking the hallways, trying find a Republican senator to scream at.”

A recent Morning Consult poll found that “security voters” may play a key role in the GOP coalition this fall and that women Republicans were more likely to be security voters than Republican men. The issues they care about include immigration and border security.

“Abolishing ICE is regarded by the majority of both Democrats and Republicans as a security issue, not an immigration issue, particularly for suburban women,” said Courtney Alexander, a spokeswoman for the Congressional Leadership Fund.

“Democrats always rely on identity politics,” says former NH state party chairwoman Jennifer Horn. “But it won’t work here. We’ve had women governors, we’ve had an entirely female congressional delegation (off-and-on) since 2013 —including Republican Kelly Ayotte, who was beaten by Maggie Hassan, another woman—and Democrats are telling the voters ‘shame on you if you don’t vote for a woman?’  That’s not going to get Molly Kelly elected.”

She may be right. The new UNH Granite State poll has Sununu up 50-39, while a new poll from the New Hampshire Institute of Politics at St. Anselm College gives Gov. Sununu a 49-39 percent lead over Molly Kelly. More significantly, despite all of the direct appeals to women voters by Kelly and the state party, he trails her with women voters by a slim 45-43 percent margin.

Meanwhile, he’s leading among men 54-32 percent.  And without any gender-based targeting.

Could it be that the “pro-woman” push has gone so far it’s beginning to be perceived as “anti-male?”