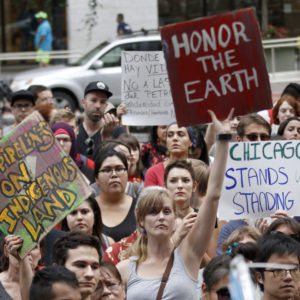 Environmental activists across the country have taken up a new cause: the Dakota Access Pipeline. But are they hijacking the Native American protests against the pipeline to push their own agenda?

That’s what some commentators think could be happening as protesters by the bus load descend upon southern North Dakota to block the pipeline from being built.

“First are false consciousness and the specter of exploitation. Are environmentalists in coalition with Native Americans, or are they using them for their own purposes?,” asks Jay Michaelson in his column for The Daily Beast.

“What about when those purposes are crossed? For example, the short-term alternative to pipelines like DAPL is to put oil on trains and trucks. That’s worse for the climate, but better for the Native American lands. Would environmentalists support it? And if not, is their current solidarity with the Sioux real? Real people—in this case, Native Americans who have endured centuries of oppression—are put in harm’s way and are, in a sense, pawns in a larger conflict,” he wrote.

A big win for environmentalists occurred last week when the Obama administration temporarily blocked construction of the DAPL, which was supposed to carry 570,000 barrels of crude oil per day from the Dakotas to Illinois across 1,134 miles. The move from the executive branch came after a federal judge ruled last week the project could move forward.

What first started as a protest by the Standing Rock Sioux tribe and other Native American tribal nations for supposedly not being included in the initial planning of the pipeline, has turned into a national protest. Last week, demonstrations were held in cities across the country and more people continue to go to North Dakota to join the movement.

The Army Corps of Engineers met with the Standing Rock tribe nine times before finalizing the route, and the Corps held a total of 389 meetings with Native American tribes about the project. This fact has led some conservatives to suggest that environmental lawyers have pushed the Standing Rock to make perjurious claims in their recent court filings that state the tribe was not consulted.

The protest at the pipeline site turned violent last week after, according to tribal officials, construction crews destroyed American Indian burial and cultural sites. More than 30 people were arrested. The pipeline does not ever cross into the Standing Rock Sioux tribe’s reservation but instead goes through private land, with support of the landowners.

Even national figures are now getting involved. Green Party presidential candidate Jill Stein went to the protest and is now being charged for trespassing on a construction site or vandalism of equipment. Neil Young wrote a new song about the movement titled “Indian Givers” with the music video including clips of the protest.

With all this media attention, it could be easy to forget about the people the pipeline is actually affecting, Michaelson argues.

“On the surface, the Dakota Access Pipeline (DAPL) is a clash between Big Oil and Native Americans,” he wrote. “But these protests and lawsuits have a deeper agenda. Whether they succeed or fail, what these actions are really about is raising the cost of doing business in fossil fuels. Anti-DAPL activists say they don’t want the DAPL built here. But in reality, they don’t want it built anywhere. ”

Phil Kerpen, head of the free-market public policy research group American Commitment, also agrees that there is a hidden agenda by some of the environmental activists.

“Score one for the dishonest environmentalist smear merchants, who have now exposed their hypocrisy by moving on to oppose the Dakota Access Pipeline. Their real agenda is anti-oil, period,” he wrote in an op-ed published on CNSNews.com.

But could the movement also have been taken over by the white, elitist environmental advocates? There are reports and articles that show a lot of members in the environmental advocacy groups are predominantly white and there is a call to include more diverse voices within the group.

“For the most part, involvement by whites in these protests is desirable because it adds to the critical mass and expands the sphere of concern,” said Andrew Austin, professor of Democracy and Justice Studies at the University of Wisconsin— Green Bay.

“I disagree with the suggestion that the Sioux and allied nations’ protest is being hijacked by environmentalists at the expense of the concerns of affected indigenous groups,” he said in an interview with InsideSources. “The issue of the pipeline affects more than just Native Americans. Environmentalists have a general complaint against pipelines. And the Dakota Access Pipeline involves land…that could affect millions of people downstream. And then there is the larger issue of fossil fuels and climate change.”

Although race could be a factor in the DAPL protests and the increase in media coverage (there have been no reports or studies about it yet), Austin says white involvement could help environmentalists mission to be more diverse.

“Race could be an issue in the sense that if whites weren’t involved there would likely be little attention drawn to the situation,” he said. “This is not to imply that whites are making the protest happen, but a criticism of the way Native American issues are generally not given a lot of play in the media. Having this protest grow to include many more and diverse voices raises the profile of the issue.”