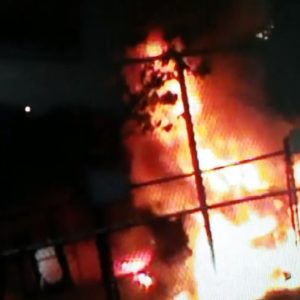 For almost two years, Washington State’s attorney general Bob Ferguson and his progressive allies have been waging a legal and media war against an immigration detention facility in Tacoma and the private company that operates it for the federal government.

Last month, that war became real when Antifa activist Willem Van Spronsen, armed with a rifle and Molotov cocktails, launched a violent attack at the Northwest Detention Center, setting fires and attempting to shoot at the building. Spronsen was trying to turn a propane tank attached to the center into an improvised explosive device when Tacoma police shot and killed him before he could detonate it.

“Thank God for the Tacoma P.D.,” ICE former Acting Director Tom Homan told Fox News last week. “If he [Spronsen] would have been successful in burning that building down, you’re talking about over 1,400 lives.”

The Tacoma attack is part of a series of incidents targeting immigration operations, the most recent involving shootings at two offices in San Antonio.  And some supporters of ICE and border patrol believe this rise in violence, like the timing of the Washington A.G’s lawsuit, is no coincidence.

Daniel Bible, ICE San Antonio field office director, said in a statement after the shooting that “political rhetoric and disinformation that various politicians, media outlets and activist groups recklessly disseminate to the American people regarding the ICE mission only serve to further encourage these violent acts.”

“I have to blame the hateful rhetoric you hear from ‘The Squad, AOC, the speaker of the House—nearly every candidate running for president wants to abolish ICE,” Homan told Fox News the next day. “We’re ‘Nazis,’ we’re ‘racists.’ We’re running ‘concentration camps,’ and they wonder why people are emboldened to do these kinds of things.”

That certainly appears to be the case with Spronson, who echoed Rep. Alexandria Ocasio-Cortez’s “concentration camp” language in a manifesto he posted shortly before the attack. However, he also used arguments similar to those of the Washington attorney general and others involved in the lawsuit against the same facility he firebombed.

In September 2017, Attorney General Ferguson filed a lawsuit against The GEO Group, which operates the Northwest Detention Center in Tacoma, over the policy of paying detainees who participate in the “Voluntary Work Program” inside the facility one dollar a day.  According to the A.G., this amounts to a form of slavery.

“Let’s face it: GEO has a captive population of vulnerable individuals who cannot easily advocate for themselves. This corporation is exploiting those workers for their own profits,” Ferguson said when he announced the lawsuit. “This is a rogue, cruel, and unconstitutional policy. We’re going to put a stop to it.”

Ferguson was joined at his press conference by Jorge Barón, executive director of the Northwest Immigrant Rights Project (NWIRP). “We are very excited about this action,” Barón said of the lawsuit.

This is hardly a surprise. The NWIRP opposes virtually all immigration enforcement and Barón has called the mere existence of any immigration detention facilities “ problematic.”  The group also objects to the fact that a private, for-profit vendor like The Geo Group is operating some of these facilities.

“We have to get away from this being an industry that’s driven by profits. We’ve got to get away from the mass detention of people in immigration proceedings. These are civil matters; why are we locking them up?” asks NWIRP legal director Matt Adams.

NWIRP has also allied itself with more radical organizations like the NWDC Resistance in their push against Trump administration immigration policies. The fact that it’s openly joining with the Washington AG’s Office promoting this lawsuit leads some to believe Ferguson is coordinating his efforts with progressive activists, as opposed to concerns about law enforcement.

Representatives for GEO have pointed out both in court documents and the press, the dollar-a-day wages are set not by the company, but by federal policy, going back to the FDR administration.  They’ve been in place at the Northwest Detention Center since at least 2005 when GEO began operating the facility, including the entire eight years of the Obama administration — which codified the program as part of ICE’s Performance-Based National Detention Standards in 2011.

And yet the state of Washington never filed a lawsuit demanding that the detainees earn the state’s minimum wage for chores done around the facility – until now.

“The voluntary work program and its compensation have been part of the federal government’s national detention standards for decades under administrations of both parties,” Paez said.

A U.S. District Court judge has ruled that the lawsuit can go forward, but the questions of motive and collusion still remain. Are the lawsuits part of a coordinated effort to undermine ICE’s ability to conduct enforcement actions by driving vendors out of the detention business or increasing ICE’s operating costs?

Interestingly, when InsideSources filed a public records request with the Washington State Attorney General’s Office for any documents related to the lawsuit — in particular any communications between the office and outside activists groups — nearly all of the 1,600 pages provided were entirely redacted. They did, however, manage to include several pages of postcards from citizens thanking Ferguson for filing the lawsuit. More records are expected to come as a result of the request, but no timeline has been given for when InsideSources will receive additional files. (Batch 1 and Batch 2 of the records request are available on our site).

No information about communications between the state agency and the outside organizations, not even the invitation the AG’s Office (presumably) sent to Baron and NWIRP to participate in the press conference.

And as for attacking GEO and private vendors, if Washington State succeeds in overriding the federal policy and imposing the state’s $12 minimum wage, the higher costs will largely be paid by the taxpayers, not the private companies.

“You don’t have to burn the [expletive] down, but are you just going to stand by?” Spronsen asks in his Antifa manifesto. And, unfortunately for the men and women who work at ICE facilities, a disturbing number of his political allies are answering that call.