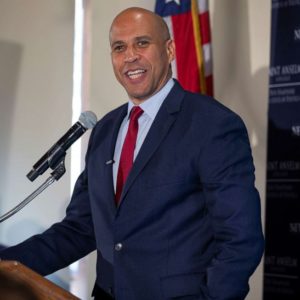 Are Early-State Democrats Too ‘Racist’ To Support Candidates of Color?

When Sen. Kamala Harris dropped out of the Democratic presidential primary, she blamed it on her inability to raise money. Some pundits, both left and right, said her lack of a clear message was the problem.

But others saw a more disturbing force at work: White people. In particular, the white Democratic primary voters in Iowa and New Hampshire.

“Iowa is 91 percent white. New Hampshire is 94 percent white,” Rolling Stone senior writer Tim Dickinson tweeted in reaction to Harris’s exit from the 2020 field. “These states are off the charts white, and yet the Democratic Party gives the electorates in these states effective veto power over the nomination process.”

Nate Silver of the left-leaning website FiveThirtyEight wrote, “If the Democratic Party wants a field that’s representative of its members and its voters, it probably shouldn’t have two states as white as Iowa and New Hampshire vote first every year.”

Defenders of the New Hampshire #FITN primary are used to hearing the “too white” complaint. “You go to New Hampshire. There are not any minorities there. Nobody lives there,” then-Senator Harry Reid (D-Nev.) told the Washington Post back in 2015.

What’s new is the more overt suggestion that white New Hampshire Democrats are rejecting candidates of color out of bigotry. That they’re participants in the “structural racism.”

“I’ve seen the bile, the anger, from my family members, to people in the Congressional Black Caucus, to leaders of color across this country who just don’t understand how we’ve gotten to a point now where there’s more billionaires in the 2020 race than there are black people,” Sen. Cory Booker said in response to Harris dropping out of the race.

“Kamala Harris officially ended her campaign today, which means that all of the candidates who currently qualify for the December Democratic debate are white. White supremacy is not just a Fox News problem, folks.”

So is it a New Hampshire Democratic Party problem?

“I have heard all the arguments and don’t buy any of them,” former Democratic National Committeeman and longtime New Hampshire strategist Terry Shumaker told InsideSources. “They certainly don’t explain Govs. Inslee, Hickenlooper and Bullock dropping out — as well as Beto and others dropping out even earlier — they are all white.”

Shumaker notes that “an African American has won our primary, as has a woman and a Mormon.  Jesse Jackson ran competitively here in the 1980s. He didn’t blame not winning on the voters.”

True, but progressives are. Their argument isn’t just that “New Hampshire voters are too white,” but rather this whiteness prevents them from supporting candidates of color. Call it “racism,” “bigotry” or “lack of wokeness”–it’s a commentary on New Hampshire Democratic primary voters.

“I don’t agree that they are saying Iowa and New Hampshire are racist,” New Hampshire Democratic Committeewoman Kathy Sullivan told InsideSources. “They are saying that having more diversity among voters would better reflect the Democratic electorate. I think the DNC addressed that by having Nevada and South Carolina added to the calendar.”

“I would also add that Barack Obama came very close to winning the New Hampshire primary in ’08, and he won the general election here twice.”

Then there are the New Hampshire polling averages for Castro, Booker and Harris, which are similar to their numbers nationally. Yes, when she dropped out Harris’s RealClearPolitics average was about half a point lower in the Granite State (2.7 percent) compared to her national numbers (3.4 percent), but both Booker and Castro are actually outperforming their nationwide average in New Hampshire.

Even in her racially-diverse home state of California, Harris had been stuck in single digits and well out of the top tier. Are white voters to blame?

And yet it remains the case that the top six Republican frontrunners in 2016 were more racially diverse (one African American and two Hispanic candidates) than the Democrats today. And many on the left see bias at work.

Former HUD Secretary Julian Castro, whose 2020 POTUS candidacy has rarely cleared the 5 percent support mark, has long argued that New Hampshire’s demographics were a problem for Democrats, going so far as to compare it to what he deems Republican voter suppression.

“We can’t go around thanking black women for powering Democrats to victory all over the country, and then at the same time hold our first caucus and our first primary in states that have almost no African Americans,” he said. “We’re right to call Republicans out when they suppress the votes of African Americans or Latinos, but we’ve also got to recognize that this 50-year-old process was created during a time when minority voices had zero power in the [Democratic] party.”

Progressive NH State Rep. Kris Schultz (D-Concord) tweeted, “I want a Democratic party where @KamalaHarris, @CoryBooker & @JulianCastro are in the @DNC debates while other candidates cannot just buy their way in because they are self-funded multi-millionaires! No more corruption! No more buying elections! Reward the grassroots!”

But when InsideSources asked if, as a step toward more diversity, NH Democrats should give up their First In The Nation status, Schultz said absolutely not.

“I am 100 percent for the NH FITN,” she said. “And I was Al Gore’s South Carolina Caucus Director and I helped in Nevada, too.