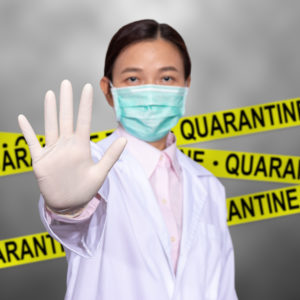 The question on many minds during our time of quarantine: How far can state government officials go in curtailing constitutional rights like the freedom of association, free exercise of religion, and right to travel among and between the states, in service to public safety by reducing the spread of the coronavirus?

The courts have been there, done that, and the answer is, “quite far.”

This is not the first time our country has faced a life-threatening epidemic. Our Founding Fathers saw mass death due to the mosquito-borne Yellow Fever on a nearly year-in, year-out basis in the 1790s and the decades that followed.

They did not know that the fever was mosquito-borne, and that their efforts to quarantine would not “flatten the curve.” They simply knew the fever took lives indiscriminately. And so they quarantined. In 1798 conditions became so bad that the governor of Pennsylvania banned travel between Philadelphia and New York.

The most significant early decision from the U.S. Supreme Court to mention the state power to quarantine occurs in an 1824 case known as Gibbons v. Ogden. Considered a landmark decision on the federal power to regulate commerce on the interstate waters, Chief Justice John Marshall — our greatest chief justice; the competition is only for second — explained that one of the powers the state possessed was the power to quarantine.

This was not controversial; as Marshall put it, the power to quarantine was seen as a power “flowing from the acknowledged power of a State to provide for the health of its citizens.”

The Supreme Court’s most direct comment on the power to quarantine arose in Compagnie Francaise de Navigation a Vapeur v. Louisiana Board of Health —a case from Louisiana, when the court considered a broad quarantine order — not unlike some of the quarantine orders our state leaders have considered over the last few weeks.

Louisiana had faced outbreaks of Yellow Fever two out of every three summers throughout the 19th century, leading to a very aggressive state stance on the power to quarantine. The order the court considered read: “hereafter in the case of any town, city, or parish of Louisiana being declared in quarantine, no body or bodies of people, immigrants, soldiers, or others shall be allowed to enter said town, city, or parish so long as said quarantine shall exist.”

The Supreme Court, by a vote of 7-2, approved that order as constitutional when it was challenged by individuals who attempted to enter the state on a ship from Italy. Even though there was no evidence of symptoms of the fever or other disease on board, the court held that a state was justified to keep people out in order to protect the citizens of the state; that to do so did not violate the U.S. Constitution.

The broadest of the statewide shelter-in-place orders in California, New York or Pennsylvania go further than past precedent — controlling economic activity and populations over vastly more territory. But assuming courts are likely to approve today’s quarantine measures, what should we look for as Americans to make sure the government is not taking advantage of this otherwise unconstitutional power to restrict constitutional rights during this emergency?

First, these powers are by their nature temporary. They are justified by the extraordinary circumstance of a pandemic, in which a highly communicable and frequently lethal disease can be spread by infected people merely interacting with others. The government is acting legitimately if the purpose and scope of its actions is to prevent infected people from harming others.

Do we know when the virus will subside? Of course not. But when the pandemic ends, the justification for the extraordinary assertion of government powers ends, too.

Often our government has used real emergencies — like the 9/11 terrorist attack — or manufactured emergencies — like the so-called drug war of the 1970s and ’80s — to take on additional powers and then refuse to relinquish those powers when the crisis subsides. Americans should watch their government officials carefully to make sure they do not exploit this emergency after it ends.

Vigilant Americans should also monitor the government to make sure it does not abuse the quarantine power during the pandemic. Is the government quarantining an individual as a pretext for some other improper reason to hold that individual? Officials who would exploit their powers in this manner must be dealt with severely, and there is precedent of courts ending quarantines when this power is abused.

Or are the officials privileging some politically favored activities and curtailing others under the guise of the pandemic? If we are in a quarantine, then the government should not play favorites.

Protecting the public must be paramount; if the government appears to allow some violations of quarantine orders but arbitrarily prohibits others, the people will lose faith in their leaders and fail to heed otherwise justified quarantine orders. That will jeopardize lives and is an abuse of power.

One should not assume the governors and other officials who have issued these orders are seeking to violate the Constitution. But it’s up to us as Americans to not accept our government’s actions without question.

The law provides broad authority to our elected officials to respond to an emergency, but when our leaders violate the limits of that power, Americans must call them on it.

Mark Miller is a senior attorney at Pacific Legal Foundation. He wrote this for InsideSources.com.